Who's winning the Democrats' civil war?

Economic liberals or the "pro-business" crowd? As the president's budget drama plays out, we may soon find out 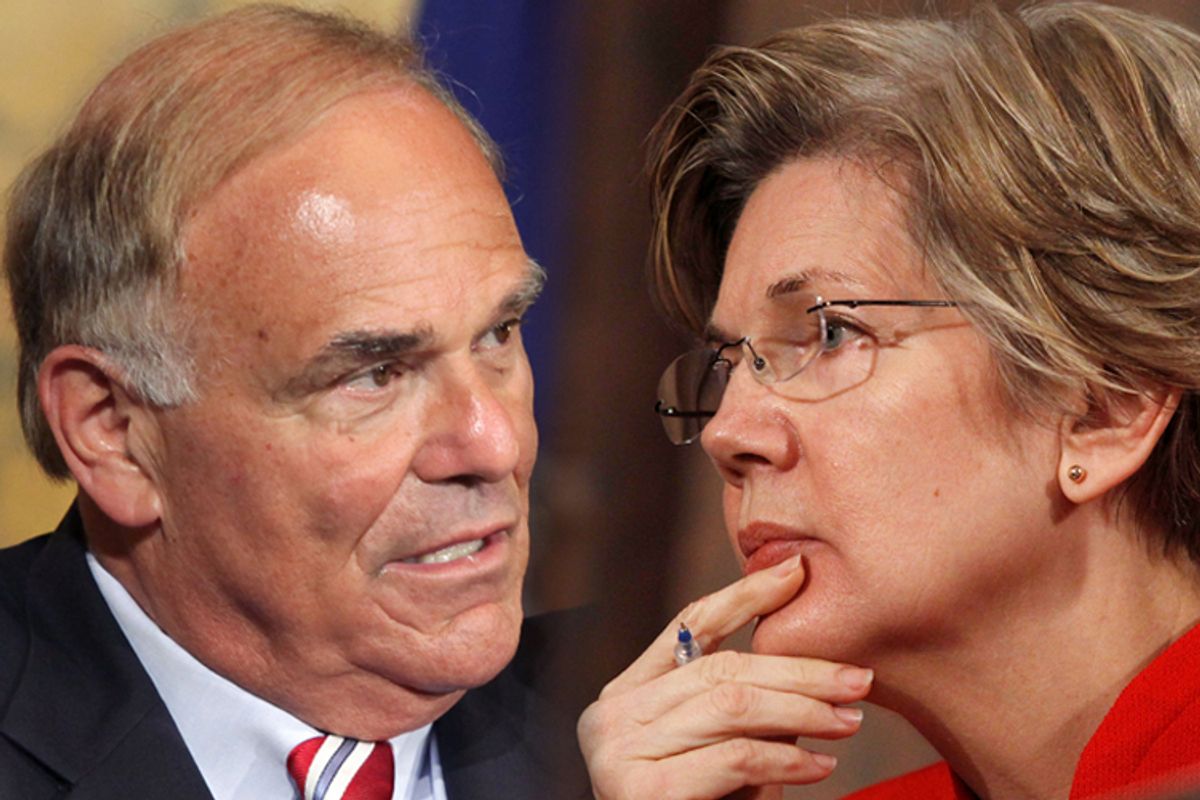 When it comes to economic issues, Democrats are not a united party. There are economic liberals, in the vein of Elizabeth Warren, who believe that very rich people who lead a good life can afford to pay more in taxes to support basic services for struggling people, seniors, and others who are vulnerable. And then there are “pro-business” Democrats, or what might be called SPECs (Socially Progressive Economic Conservatives). These are the pro-fracking, self-described "entitlement reformers" -- like omnipresent former Gov. Ed Rendell -- who talk about the need to keep taxes low and make “bold” decisions like cutting the social safety net, in an effort to fix the debt, restore “balance” and "get serious."

While the split is not discussed as often as it might be, these two camps stand far apart on economic issues, and, in some ways, are fighting for the soul of the Democratic Party. And, with President Obama’s newly reiterated proposal to cut Social Security through his chained CPI plan, a big test is approaching to see which wing of the party will prevail.

Obama’s offer on Social Security is divisive for several reasons. First, there’s the very real effect it will have on Americans relying on their benefits to get by month to month. By revising downward the cost of living index used to compute benefits, the policy change would reduce the amount that some on fixed incomes – including disabled Americans, such as veterans -- live on (precisely how many is unclear, as the administration reportedly supports “financial protections for low-income and very old beneficiaries”). This is something economic liberals cannot support; for the SPECs, this is tolerable if part of a larger deal.

Second, there’s the symbolism and precedent of cutting into New Deal-style programs. The first cut to popular, essential programs is always the most difficult; once it’s been done, and that toe is in the water, there’s the concern that future reductions could be more easily achieved. That’s why the symbolism of a Democratic president attaching his name to – and owning – the cuts is so controversial and worrying for liberals. How hard would it be for Republicans to push future cuts through, when this is now a mainstream Democratic policy?

Beyond these issues lies a more philosophical one, which comes down to different conceptions of “balance.” For SPECs and many others in Washington, balance means a plan in which both political parties give up something they don’t want. If Democrats and Republicans are both unhappy, the thinking goes, that means the plan is balanced and good.

Liberals see it differently. By their thinking, “balance” must incorporate the broader circumstances of those impacted by the policy in question. If rich people have every advantage in life – wealth, tax breaks and loopholes, healthcare, food security, the ability to influence political campaigns, etc. – and less well-off folks are disadvantaged in all the same categories, then balance calls for a policy that helps to shift things in the other direction a bit. In other words, one camp sees balance as a political end (which, incidentally, can be easily manipulated by positioning and negotiating strategies) and the other sees it as a policy imperative with real-world implications.

The question undergirding this particular debate is twofold. First, is more money actually needed to fund Social Security? And if so, how should one pay for a shortfall? In fact, Social Security is solvent and has not contributed to the debt. But pretend you don’t believe that. Then the question becomes: If you needed revenue to pay for Social Security, how would you generate it? This is the crux of the divide.

One option is to cut benefits for those in need, which Obama has proposed to do, backed by groups like Fix the Debt, the outfit funded by billionaire Pete Peterson (Rendell sits on the board, along with other SPECs, Republicans, and Simpson and Bowles). Another option is to raise the cap on income that’s taxed by Social Security. Currently, that number is in the $110,000 range, meaning any income one makes over that amount is untaxed. That’s a very regressive policy and if one wanted to generate more revenue to “pay for” Social Security, raising this cap would be an alternative to cutting Grandma’s benefits.

Asked about the chained CPI scenario, liberal Sen. Sherrod Brown told Salon, “This is unacceptable. There are common-sense ways we can reduce the deficit that do not demand sacrifice from the most vulnerable Americans.”

But there is not consensus in the party on this, obviously. This should not actually surprise anyone, because liberals and SPECs disagree on a number of economic policies: how to treat unions, tax policy, public education spending, minimum wage, the wisdom of austerity, and so on. But with Obama presenting this as part of his budget proposal, he has forced the question and exposed this rift.

So far, there are early signs that the party is willing to buck its leader – and that liberals may prevail. A majority of House Democrats circulated a letter in February expressing their opposition to chained CPI, and a key congressional source tells Salon he expects that opposition to hold, if a vote ever came to the floor. In fact, while several liberals and Democratic elected officials told Salon’s Alex Seitz-Wald yesterday that they remained opposed to the policy, there were few if any Democrats coming out to support it.

That’s a reflection of the politics in the country at the moment. Sure, cuts to Social Security are never popular. And indeed, these particular ones aren’t either. But more broadly, economic liberalism has experienced an upsurge in the last year, politically and substantively. From last September’s Democratic convention, to Obama’s inaugural speech (“Medicare and Medicaid and Social Security, these things do not sap our initiative. They do not make us a nation of takers. They free us to take the risks that make this country great!"), the party has recently relied on explicitly liberal rhetorical appeals. And policy-wise, the political currents have been strong enough to incite a leftward economic shift from SPECs like New York Gov. Andrew Cuomo, a presidential wannabe who formerly preached austerity and tax cuts but now suddenly helped pass a minimum wage hike and tax increase on millionaires. This comes as initiatives to ensure paid sick leave for workers have spread throughout the country.

So if the president is moving in one direction, while his party moves in another, is he primed for a major embarrassment? Perhaps not. The likelihood, according to both Democratic and Republican congressional sources, is that he may be spared a revolt or humiliating intra-party defeat -- by an unlikely ally. As they tell it, John Boehner's refusal to accept Obama's deal means the proposal may never even get to the House floor for a vote. Of course, if that's the case, that's a win for liberals, too. But if, on the other hand, Obama is somehow able to move this proposal forward, and Democrats don’t stand strong against it -- well, then, it could end up that the Rendell wing of the party is the real coalition of the ascendant.