"How to Create the Perfect Wife" 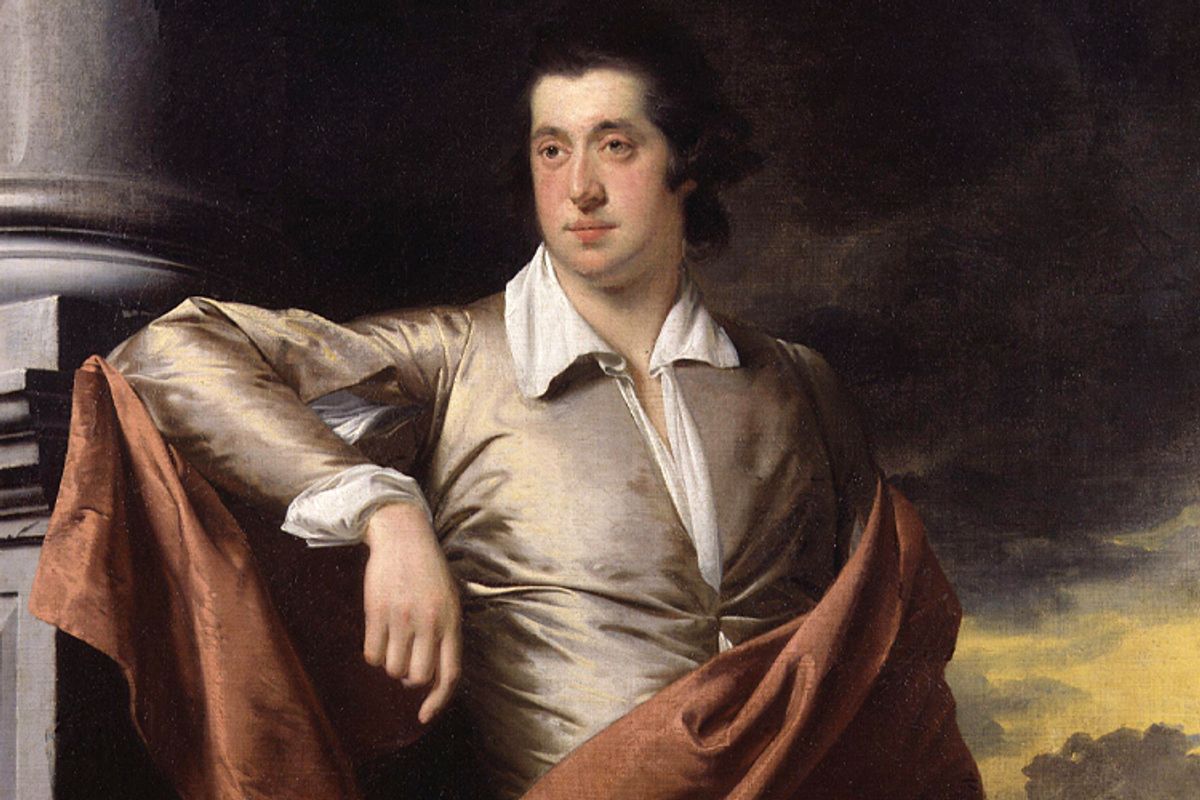 "The Dying Negro" -- the first major anti-slavery poem in English -- was the talk of London in the summer of 1773. Although the bestselling pamphlet was published anonymously, a wealthy young political progressive named Thomas Day let it be known that he was the author. Over the next decade and a half, Day would become a familiar and fiery public voice on behalf of abolition and the independence of the American colonies, as well as an early campaigner against cruelty toward animals. He would also write a hugely popular children's novel, "The History of Sandford and Merton." But, as Wendy Moore observes in her transfixing new book on Day, in the year "The Dying Negro" was published, few readers "would have suspected that its chief author secretly maintained a teenage girl who was completely subordinate to his commands and whims."

The title of Moore's book, "How to Create the Perfect Wife," explains what Day was up to. From an early age -- sniffing at the revelry in that 18th-century party school, Oxford -- Day knew exactly how he intended to live. He planned to commit himself to "the unremitting practice of the severest virtue." He would adopt an austere existence in the country, thinking, reading, writing and doing good works, while receiving few visitors. The one thing he required to achieve this nirvana was a mate, and for that, too, he had something very particular in mind.

Day did not believe in love. Love was, he explained to a friend, "the Effect of Prejudice & Imagination; a rational Mind is incapable of it, at least in any great Degree." He wanted a woman who was intelligent and educated, but utterly unworldly; physically attractive (Day had a thing for rounded white arms) but contemptuous of fashion and especially of music and dancing. She must embrace the monkish fate he had planned for the two of them, welcoming a life of few comforts and relative social isolation. Above all, she must obey him in everything, without question.

Like so many people of his time, Day was profoundly shaped by the ideas of the French philosopher Jean-Jacques Rousseau. Rousseau believed that human beings are born free and virtuous, and that society erodes both qualities. In a novel, "Émile: or, On Education," Rousseau portrayed the main character enjoying an ideal upbringing: a child liberated from the classroom to explore and encounter nature, toughened up by exposure to the elements. This book started a vogue in Rousseauvian child-rearing experiments, combining extremes of what we would call "permissive parenting" with leaving children naked outside in all weather -- or, in one alarming case, banishing them to "live in the woods, barely clothed, to scavenge for nuts and berries." (Rousseau himself always maintained that "Émile" was a novel, not a manual. Dreading "the inconvenience of a brat," he persuaded his longtime mistress to dump all five of their children in orphanages.)

Day was young, healthy, intelligent and rich -- all of which should have made him a catch. Yet over and over again, his matrimonial hopes were dashed. Several engagements or "understandings" with women of his own class -- bluestockings who were initially swayed by his idealistic fervor -- got called off. Once the lady understood that life with Day meant an unceasing series of lectures and temper tantrums over the tiniest deviation from his exacting rules, she jilted him. It also didn't help that he was slovenly and had awful table manners, all part of his disdain for the niceties of society. Day was baffled, and blamed his difficulties on the fickleness of Woman.

Throughout history, men convinced that women exist solely to serve their needs have been flummoxed to discover that women see things otherwise. Day, however, believed that he had reason and Rousseau on his side. If he could not find an already-grown woman who possessed every quality he required in a spouse, why not make one to order? In 1769, he visited a foundling home and, pretending to be seeking maidservant apprentices for a married friend, secured two girls, aged 12 and 11. His aim: educating and training them to meet his precise specifications in a wife, then marrying the one who best suited him. He even renamed his experimental subjects: Sabrina and Lucretia. Within a year, however, Lucretia had been discarded as "invincibly stupid."

As a member of the Lunar club, a learned society of Enlightenment thinkers centered in Birmingham, Day had many distinguished friends, including the physician and writer Erasmus Darwin, grandfather to both Charles Darwin and Francis Galton. His closest friend, the energetic inventor Richard Lovell Edgeworth, was the person to whom Sabrina was purportedly apprenticed. No foundling home would have let a single man take on one of its girls, as Moore explains in a fascinating section that describes how orphans and abandoned children were provided for by 18th-century charities. Most of these men (and a few women) knew about Day's plans for Sabrina, but the girl herself did not. She thought she had been elevated by a generous, if incredibly strict and demanding benefactor who was training her to be his housekeeper or secretary.

Why did no one object to Day's little project? As Moore tells it, Day's friends were entirely convinced of his "virtue" and "strict morality"; in other words, they believed he would never "debauch" the girls, and it seems likely he never did. Even when Day commenced a program of ordeals designed to "build up" Sabrina's constitution -- sticking her with pins, dripping candle wax on her arms and shoulders, firing (blank) pistol shots "at her skirts," etc. -- they murmured with concern but did not intervene. Day gave one friend a signed contract in which he promised not to have sex with the girls and to bestow an allowance and dowry on the one he did not choose to marry (or both, if he married neither). And, after all, his experiment was fascinating -- Edgeworth himself was raising his own son according to the methods described in "Émile." Much later, Day would defend himself by explaining that whatever happened, the girls were better off than they would have been if he had not taken them from the foundling home.

Materially speaking, this is certainly true. But Day, that champion of human rights, seemed oblivious to the immorality of treating another person as the means to his own ends. Given his impenetrable self-absorption, he doubtless never stopped to wonder how Sabrina would feel upon learning that the life she thought she was leading was a lie and that everyone around her had known it all along. As is often the case in such schemes, things did not play out as Day imagined.

Moore is alert to the rich, novelistic irony and many remarkable characters in Sabrina's story; she could hardly help but be aware of this, given that the truth, when it finally came out, inspired fiction by Maria Edgeworth (Richard's daughter), Fanny Burney (who knew Sabrina well) and Henry James. George Bernard Shaw's "Pygmalion," the basis for "My Fair Lady," owes much to tales of Day and Sabrina, as well. But in addition to her detailed and acerbic observations on Day, Moore has tracked down information on Sabrina that had long been thought lost. "How to Create the Perfect Wife," as delectable as any good novel, is also the best remedy for wrongs done long ago. It takes a girl who was plucked from obscurity to become an experiment, a paragon, a symbol and a legend, and it has made her a person once more.