Like Joan Didion and George W.S. Trow, the critic and novelist turned post-Woodstock disillusionment into art 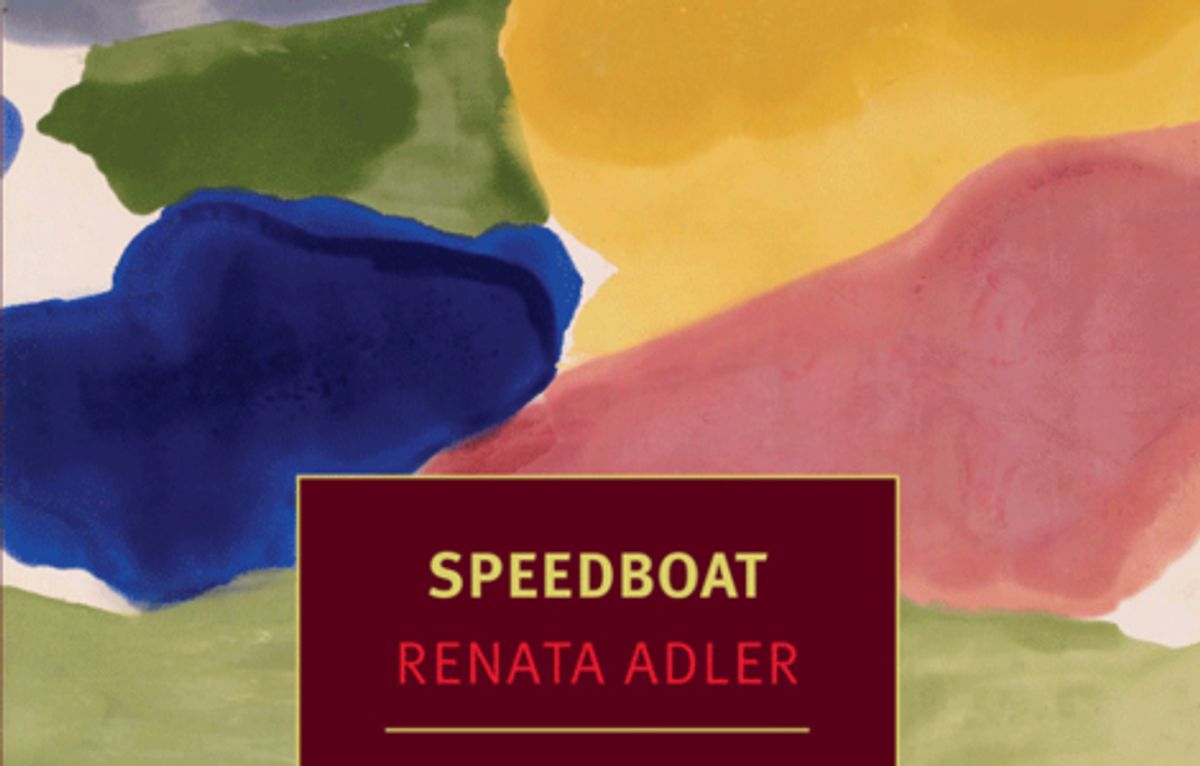 In the past few weeks, there have been quite a number of pieces published on the two novels of Renata Adler, which were reissued this week by The New York Review of Books. Nearly all of them contain a reference to the infamously negative review Adler wrote of her former New Yorker colleague Pauline Kael’s book of collected film criticism. Usually the reviewer quotes one particularly damning line from Adler’s 8,000-word excoriation of Kael’s book, but really, the whole thing is a masterwork of literary analysis. In the beginning of the piece, Adler demonstrates her great talent for deflating an idea by giving us a nutshell description of the critic’s job:

What [the critics] provide is a necessary consumer service, which consists
essentially of three parts: a notice that the work exists, and where it can be
bought, found, or attended; a set of adjectives appearing to set forth an
opinion of some sort, but amounting really to a yes vote or a no vote; and a
somewhat nonjudgmental, factual description or account, which is usually
inferior by any journalistic standard to reporting in all other sections of the
paper.

So herewith, from this critic, a somewhat nonjudgmental factual description or account: "Speedboat" was published in 1976 to almost universal acclaim (it also won the Ernest Hemingway Award for Best First Novel). It has been described as, among other things, an episodic, collage-like, aphoristic, epigrammatic anti-novel, and it follows, however loosely, the life of journalist Jen Fain. Fain, very much Adler’s fictional stand-in, is a young woman from New England who attends a prestigious women’s college, then an institute of higher learning in Paris, and finally lands a job as a gossip reporter in New York, where she lives in a brownstone. None of this is immediately clear from reading, but rather is something that must be pieced together from the vignettes, one-liners, and transcriptions of Beckett-esque phone conversations that Adler provides. We never get a detailed portrait of Fain, although what we do get is much more defined than the portraits of the many other characters that appear. These minor characters — usually their appearances are so brief that “character” seems too evocative a term — are of such an enormous variety in terms of occupation, age, and temperament that it seems futile to list examples, but I will say that there is a disproportionately high number of analysts and dogs. There is a lot of group travel, mostly to Caribbean islands, although the reader is often not told who is in the traveling band and, as it is often said of city life, the constant assemblage of people into jet-setting parties, cocktail hours, bodies of alumnae, or branches of academia makes the protagonist seem lonelier and more disenfranchised than she would if she were just lonely and disenfranchised. The book builds, as it is clear it will from early on, to a non-climax, and a non-ending. It stops, as Adler writes, “on a dime.” Period. “There are no conclusions to be drawn from it,” she says, elsewhere.

Another thing previous reviews seem to have in common is the use of the word "absurd," not as an adjective but as a noun — "the absurd," a state of existence or a milieu. But the sense of the absurd one gets from reading "Speedboat" — or at least, that I get from it — is a lukewarm one. Sure, some of the little stories she tells are, like the one below, objectively strange:

A few years ago, the wire services reported that, on account of a defective latch,
the cargo door on a DC-10 opened, in flight. A coffin fell out. A lady at work in her
flower garden saw what she took to be a coffin fall from the sky in a neighboring
field. Having been recently widowed, the lady made the obvious inference. She put
down her trowel, drove to the nearest state asylum, and committed herself.

Somebody was nudging my tray along the rail at the museum cafeteria. I was
trying to keep my tray from bumping the tray ahead. I held my fingers firmly
on the tray top, hooked my thumbs underneath the steel bar. The pressure of the
nudging tray increased. I gave in to the superior determination. Doubtless, the
tray pusher had had an awful day. I let go. My tray slid into the next tray, which
slid into the next, which crashed into another. At the cashier’s corner, there was
a pile-up. Tea bags, jello, trays all over everything.

What gives the novel, then, the sense of the uncanny or incongruous is not really the content of the vignettes, but their accumulation, the fact that, when lined up beside one another and compared, they amount to a strange, undecipherable picture. But lots of little tidbits (odd or commonplace) all lumped together, when looked at long enough, can very easily take on the appearance of being enigmatic or profound. (It’s pretty easy, then, to see why they would choose a painting by Helen Frankenthaler as the cover art.) It’s almost like a Magic Eye poster, and any child who has ever stared at that pixilation knows that if you don’t see something, you eventually just make it up, or you stare at it long enough to go cross-eyed and believe you see something. The picture extracted from the catalog of oddities Adler gives us can be interpreted as profound in a vertigo-inducing sense, but can also just as easily and validly be seen as boring or pointless, a “dinner that is all condiments,” as Anatole Broyard wrote in one of the few negative reviews of "Speedboat," if not the only one. It can amount to reading a smart but depressive person’s Tumblr. (Unlike many of the other reviewers, I have no nostalgic context in which to place my reading of the book. I did not approach it when I was young and hungry for the world, or despondent in Paris, desirous of liberation from the predictably plot-driven books of my past.) Finally, it can be, as I see it, the product of a dubious source, such as the mind of a paranoid neurotic like the heroine. There are just one or two moments when Fain exhibits some emotion (she cries when suffering from insomnia, once) but mostly she is frighteningly cold in her judgment — the type of woman, to use her words, who would view pregnancy as akin to “taking a hostage.” She views everything from a cafeteria mishap to skiing instructions with suspicion. In other words, everything, in her dispassionate eyes, is the absurd; the utter absence of a counterpoint to this ought to lead one to question her worldview.

Though "Pitch Dark" isn’t advertised as a sequel, the similarities in the narrators are eminently obvious: Kate Ennis, like Jen Fain, is a New York City–based reporter, also prone to believing, as Fain seems to, that the whole world is somewhat off. “The reality I inhabit,” she says, “is already slant.” Like Fain, Ennis travels a lot, but for our new heroine, the trips are less about assignments or vacations than they are about a frantic attempt to escape the affair she is having — or has had? — with a married man. The paramour, Jake, is painted in quick brushstrokes, as is Adler’s wont, but even from this sketch, we understand that he is unfeeling and selfish. The reason that "Pitch Dark" works better than "Speedboat" — oh, the horror of revealing one’s yearnings for orthodoxy! — is that it has a sequential spine. Although there are the occasional disembodied musings on the purpose of a comma or the quirks of politics, the bulk of the book is about a trip Ennis takes to Ireland, and how, while there, she seems to slowly lose her mind in the face of the mundane. She reads conspiracy in the cold demeanors of the people who work at the castle where she’s staying, and then becomes so wary of these caretakers that she runs away in the middle of the night and abandons her rental car on a corner in a random town she doesn’t even know the name of to hitch a ride with a truck driver. The nightmarish tone, the fact that the height of the panic is in the dead of night on strange, unlit roads, is so convincing that at times it seems that perhaps the IRA might well be after her for having removed the sticker from her rental vehicle. In "Pitch Dark," Adler allows Ennis to express real emotion, most often in the mantra-like asides but occasionally also in the action of the “Irish thing,” as she calls it. There are a few lines Ennis repeats often, incantations to her lost lover. “I wonder if he will ever ask himself, say to himself, Well, she wasn’t asking all the earth, why did I let her go?” she asks. “Did I throw the most important thing away, by accident?” And perhaps the most heartbreaking of all: “But you are, you know, you were, the nearest thing to a real story to happen in my life.” We’ve all said that, or something approximating it, to a lover we’ve lost — it’s a sentiment we can all get behind.

"Pitch Dark" is a human story with a beating heart, especially when compared with "Speedboat," which is the story of a moment. It is said to have captured the widespread disillusionment of the mid-to-late 1970s, a time during which America was suffering from a massive emotional hangover after having liberally imbibed any –ism available in the ’60s. The culture was a shell-shocked one, reeling from the loss of the war, of the betrayal by the government, the abandonment of peace and love ideals in favor of a new cynicism. "Speedboat," arguably, is most meaningful when viewed as a relic of a specific era, and an example of undeniable literary risk-taking that Adler, via Fain, says she greatly admires (and who can deny the inherent value in risk?). As a work of unconventional form, it paved the way for others that describe that particular post-Woodstock disillusionment in mordant (another reviewer favorite) tones, such as Joan Didion and George W. S. Trow, as well as for the masters of fragmentary prose (Lydia Davis, David Markson, W.G. Sebald, et al.) that have come in the ensuing years. Though perhaps if you are willing to endure the melody of a “song of a prisoner who’s come to love his cage,” you will see more timeless merit in it than I did. Here I quote David Foster Wallace, also, apparently, a fan of "Speedboat."