The wonderful world of Warhammer workshops

Hardcore fans of the fantasy game regularly convene to build their armies, one handmade figurine at a time 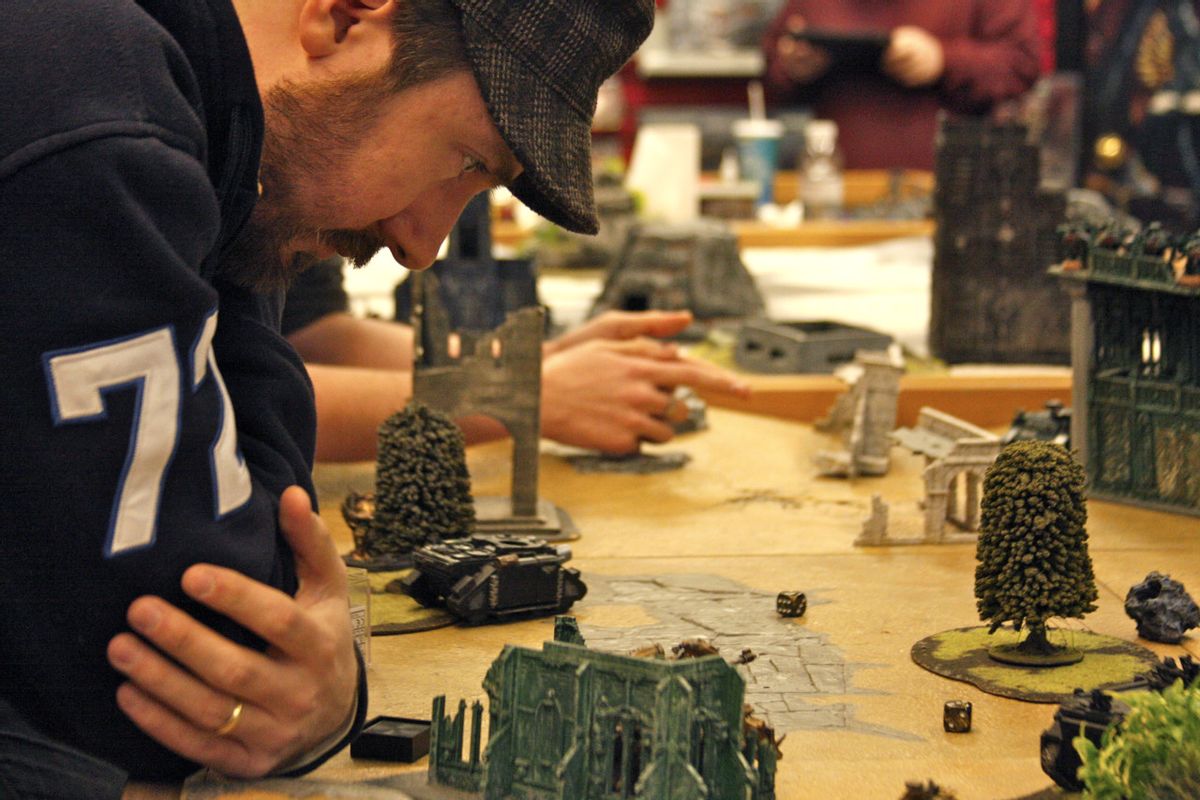 Among the plethora of burger joints and clothing stores on 8th Street in the East Village, the Games Workshop hobby center sits inconspicuously on the ground floor of a residential building. Look past the colorful plastic figurines posed for battle in the glass display cases, past the game tables down the center of the store manned (yes, they’re all men) by players intently measuring their opponent’s next move. Way in the back is where the action is. This is where the hardcore gamers spend their days chatting about technique and preparing for battle. But they’re not clutching controllers or mesmerized by a glaring screen. They are holding paintbrushes — one of the essential weapons of Warhammer. 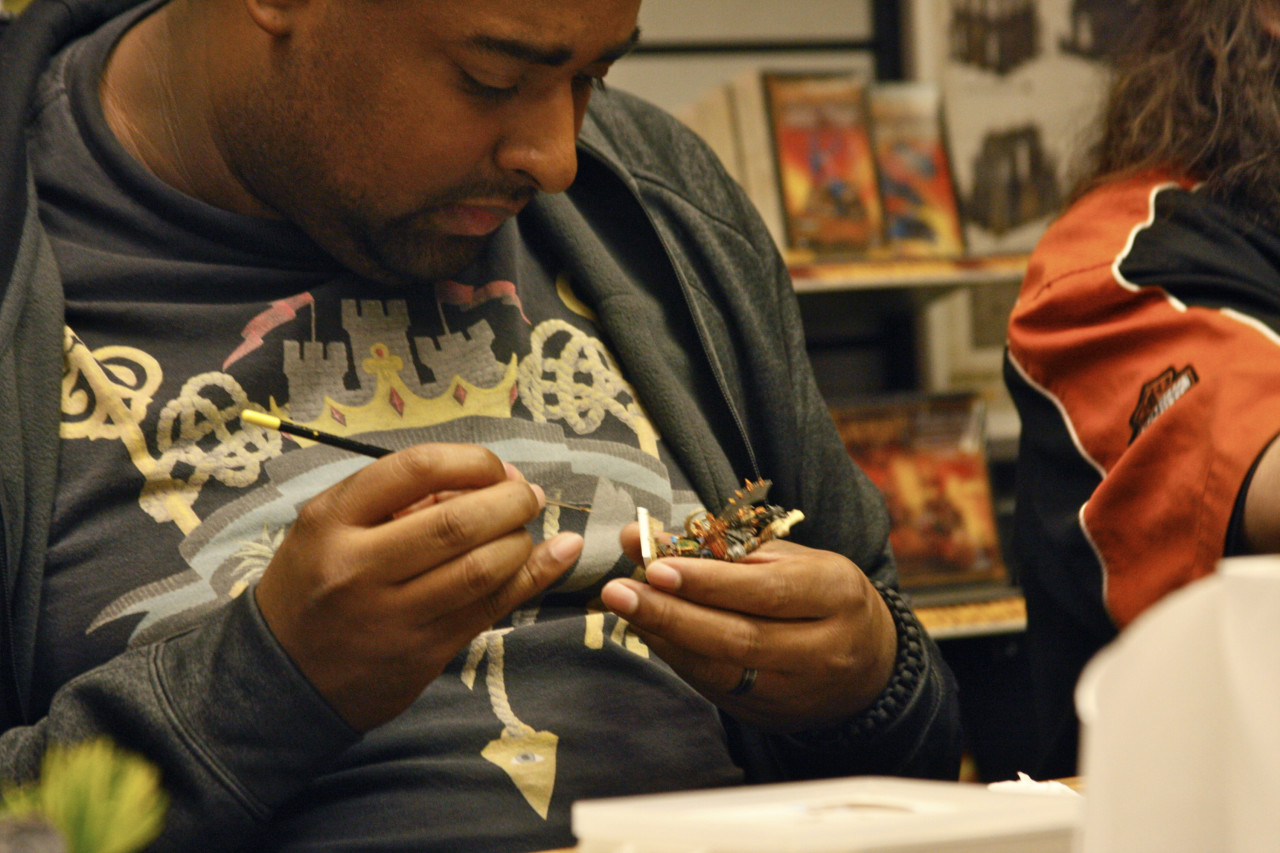 Armed with paper towels and bottles of paint, each gamer painstakingly crafts their own army of twenty-eight millimeter models, figurine by figurine.

“It’s funny because when I was a kid, I hated painting and drawing,” says Jonathan Hoffman, a twenty-four-year-old teacher and graduate student at St. John’s University, who also teaches history to sixth graders in Jamaica, Queens. “Especially for boys, it’s hard to find an artistic medium, but this kind of appeals to guys.”

Games Workshop — the largest tabletop fantasy war games company in the world, with a total of around four hundred shops like this one— has been home to fans of strategy battle games since 1975. Miniature fantasy war gaming originated in the United Kingdom with the production of tiny metal British war soldiers. According to the Historical Miniatures Gaming Society, the Master of Pages to the Duke of Brunswick created the first strategic game other than chess in 1780. Individual playing pieces represented groups of men, such as infantry or heavy cavalry. 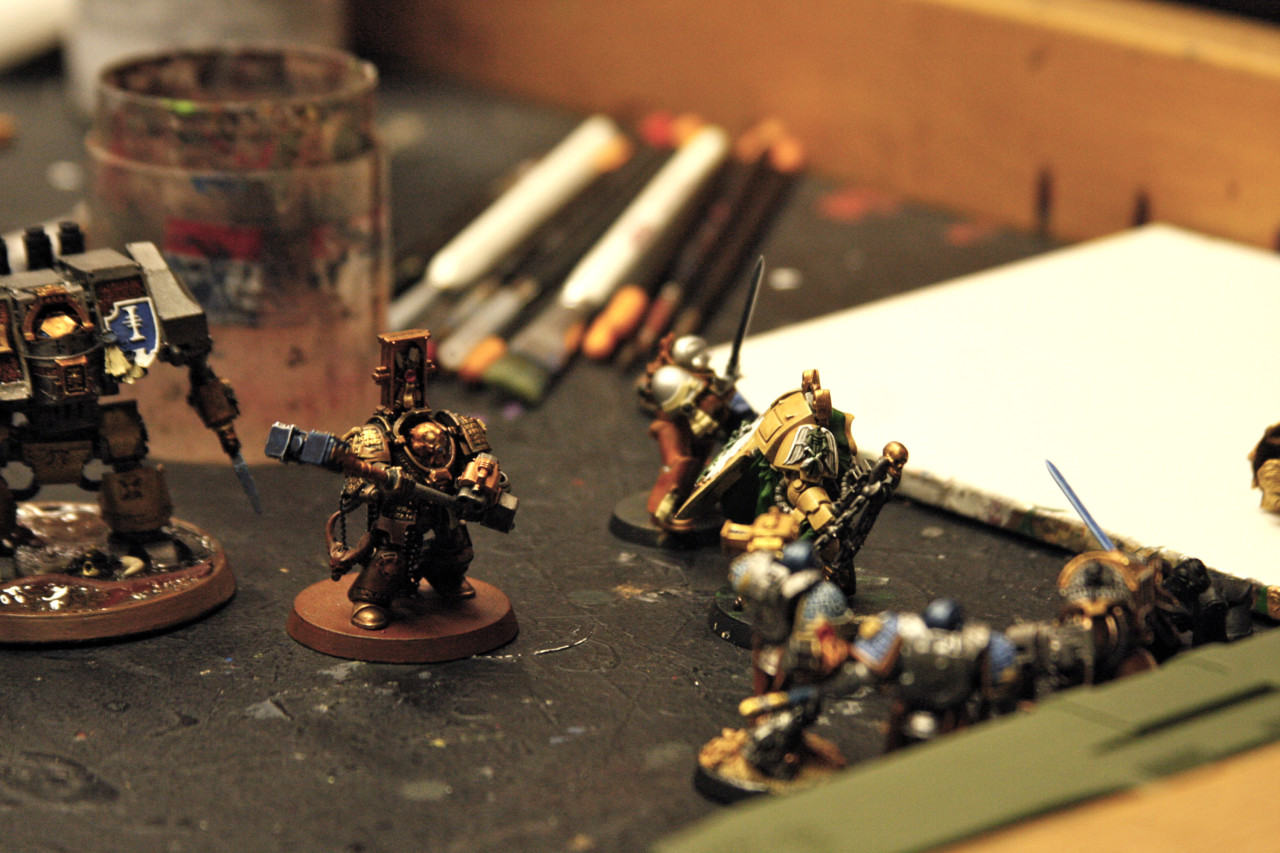 Some of Jonathan Hoffman’s finished figures in the back of the store, while he works on others.

Games Workshop developed Warhammer in 1983, a game that gave strategists a way to control entire units of armies in a fantasy world. Four years later, Warhammer 40,000 was born — a similar game, but this time set in a dystopian space-fantasy universe to cater to fans with a more futuristic bent. Players are able to select their own armies — including Dark Elves, Lizardmen and Space Marines — to battle against competitors for a game that lasts at least an hour, sometimes up to four, depending on how well the players know the rulebook. Many players take the time to craft and decorate their own figurines. Each summer, Games Workshop hosts the worldwide Golden Demon competition, a prestigious models-painting and conversion contest that gives enthusiasts a chance to show off their alteration work.

Ian McDonald, thirty-seven, has been manager of the hobby center — the only one of its kind within a seventy-mile radius — for three years now, while also working as an actor in a Queens community theater. He mentions that there are more than a few hobby center managers who are also actors. “We all live active, exciting and unpredictable lives,” he says. “You have to have a certain personality.” 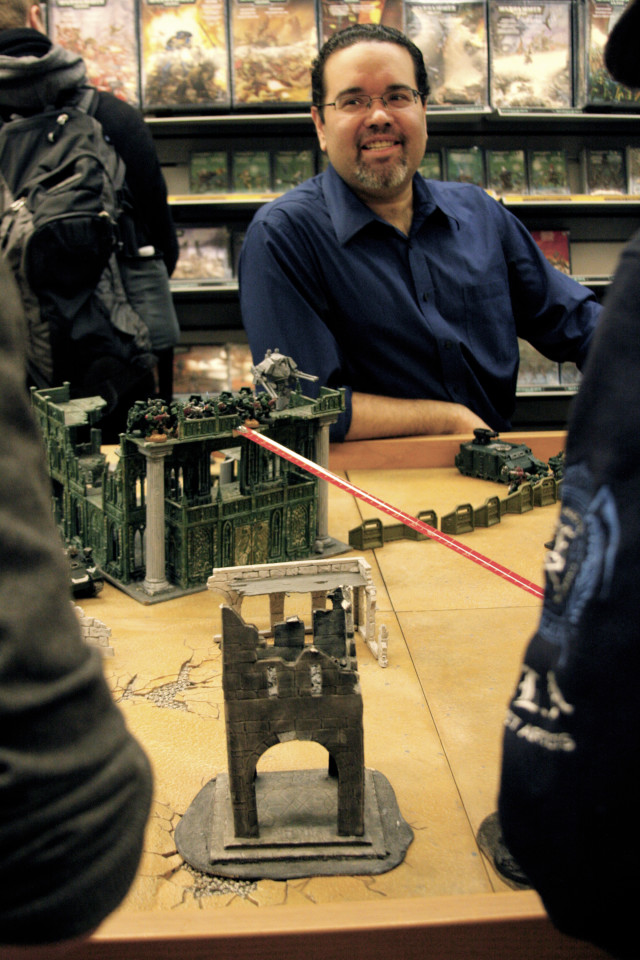 Toby, a regular, enjoys a game with friends after a long day of work.

With each new visitor, McDonald’s attention snaps to the front of the store to ask, “Now what brings you in today?” always with an honest and unwavering smile. “I make money playing with toys,” he says proudly. “I sell enjoyment.”

It’s also his passion for the game that fuels his enthusiasm. “In this hobby, I was just attracted to the story and the cinematic quality,” he says. “When I started, I was always interested in having a good-looking army. Now I show off pieces of my army like I’m showing off pictures of my kid on my phone.”

Across the tabletop one night before closing, McDonald showed off his newest project. He explained how he’s in the process of working with a few colleagues to completely convert an army — painting, slicing, gluing, drilling — all to create new and improved figurines. He posed in the way he wants to model one of his figures, with his left arm throwing coins in the face of his enemy to distract before striking him in the stomach with a spear in the right. Cutting the arm off one model, a hand off another and combining them with the ideal body shape, he assures that the conversion is possible with some concentrated, detailed work. 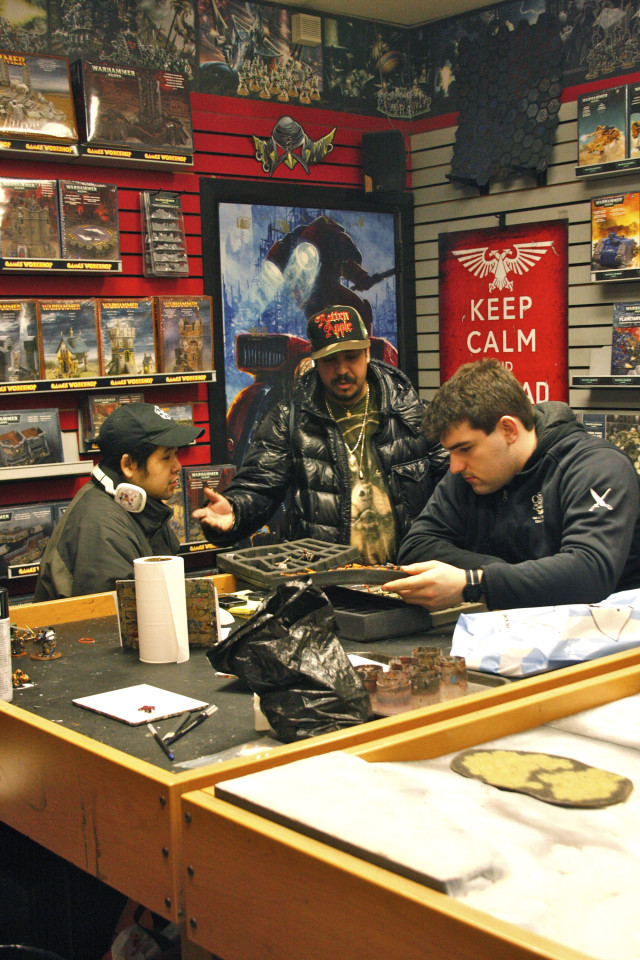 Regulars of Games Workshop chat about their figures

Some gamers don’t bother getting into the artistry of the game at all, a stance with which the painter types don’t quite agree. “For those who don’t try painting,” chuckles McDonald, “us hobbyists are like, ‘Come on, have a little respect for yourself.’”

Other people, McDonald notes, paint despite having “never played a game in their life.”

While the 440-page rulebook that rests in front of the store may suggest otherwise, McDonald insists the game itself is quite simple: “Just move, shoot, fight. Move, shoot, fight.” Yet many players won’t even think about putting their army on the battlefield without putting in many hours to bring them to life with paint first.

“When I’m painting, I just lose track of time — yesterday I was here and spent four hours to just touch up these two models. Going home at three o’clock, I could do so much more with my day,” says Hoffman.

A constant presence at the store, Hoffman sometimes spends up to seven hours on one figurine — converting it, painting it, making it his own. One day I asked him how long he was planning to stay as he opened a box to reveal at least twenty unpainted figurines. “Well, I parked my car outside, so I have to pay for parking … so at three dollars an hour, I could stay maybe six or seven hours,” he replied. 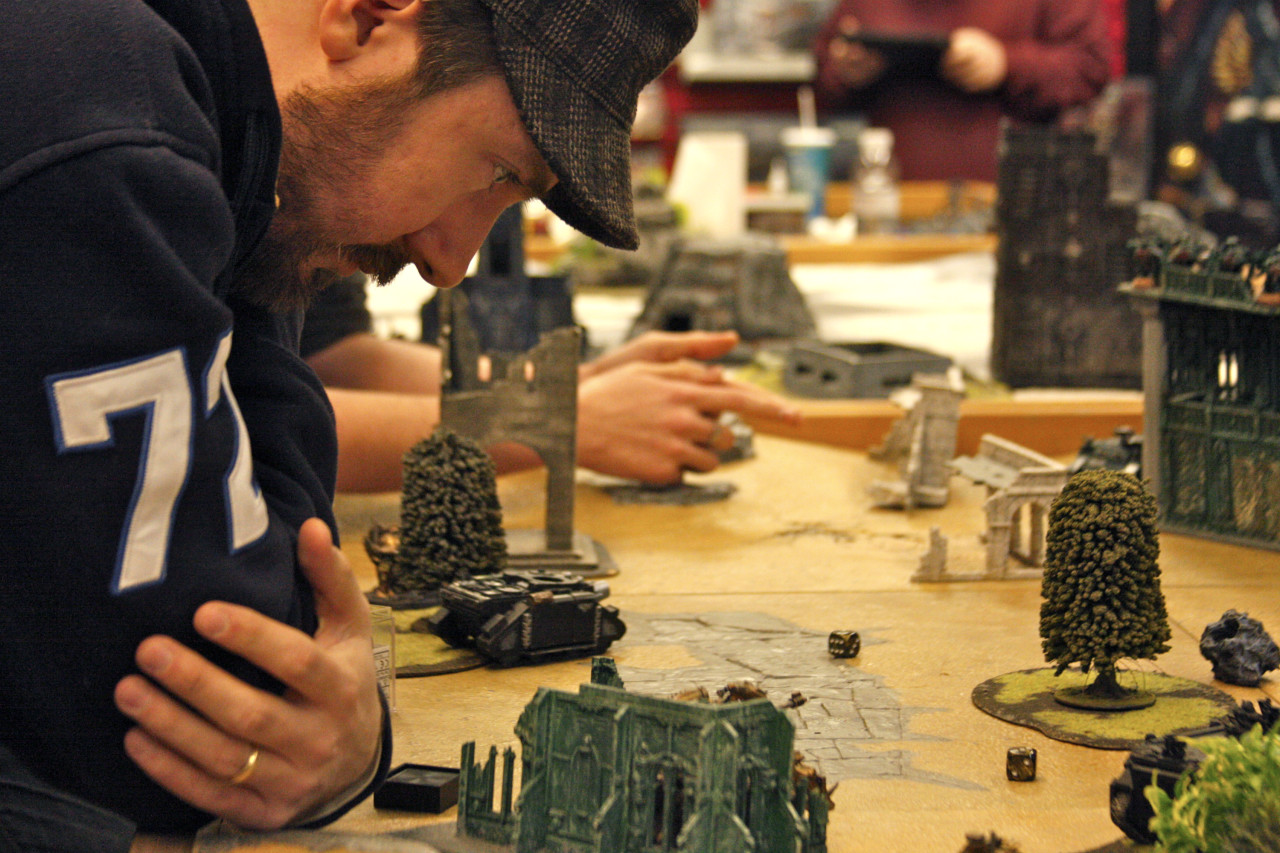 The back of the store is a hang-out spot for regulars.

For Cole Petrulis, a twenty-three-year-old financial consultant at FactSet Research Systems, the artistry of the game intimidated at first, rather than attracted. “I had never done anything on this level artistically,” he says. “I got a B in my last art class in high school because I put too much paint on the brush, so I was never really artistic. And that actually scared me a lot about this.” Petrulis started by reading the Games Workshop novels first, the series that chronicles the history of the universe depicted in Warhammer Fantasy and Warhammer 40,000. 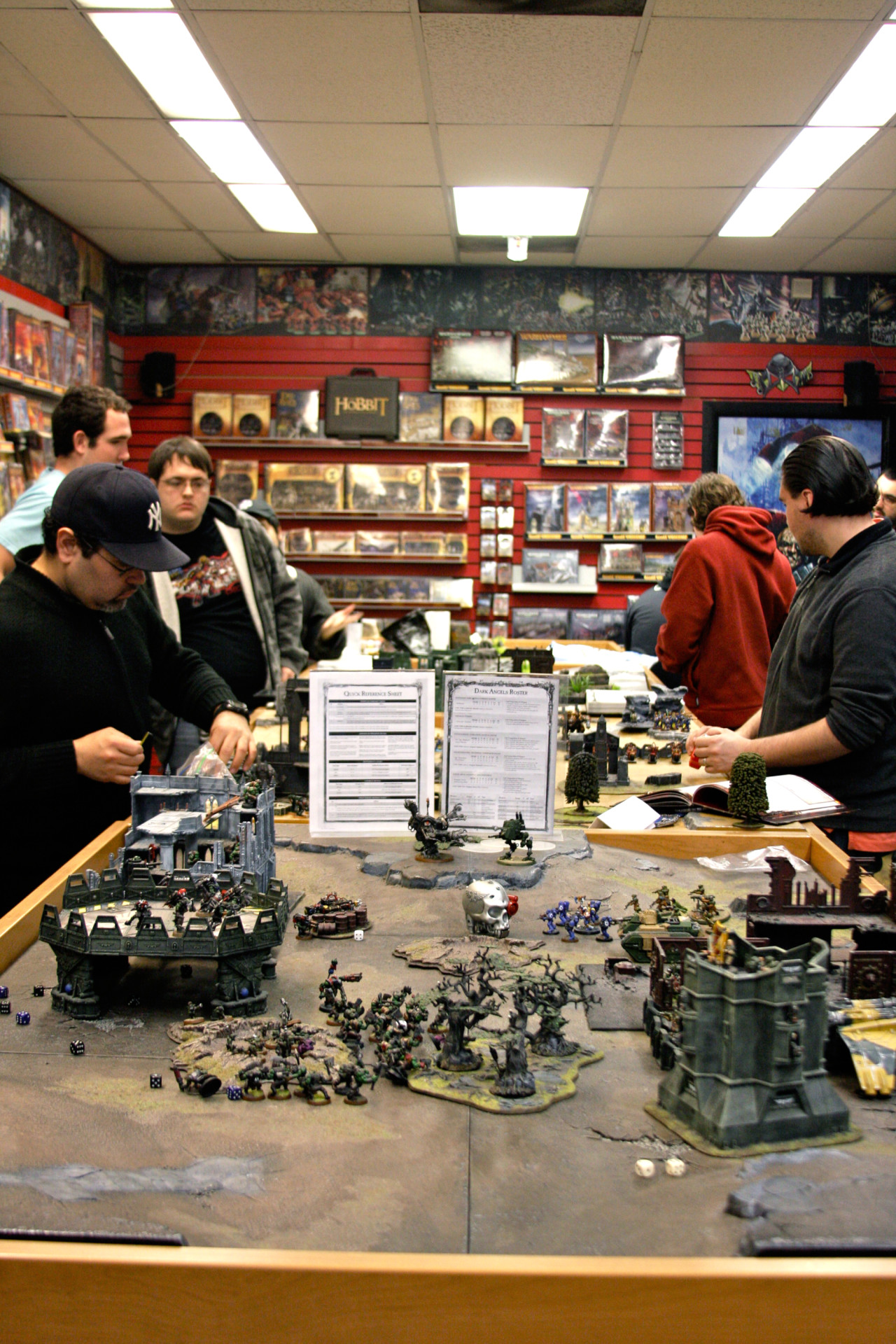 Then came the attraction of personalizing an army. “It makes them different, makes them unique, makes them mine,” said Petrulis. “Anybody can buy the box and build them, but it’s pretty plain. When you make it your own, you take pride in it.”

“Painting made it a hobby for me — you’re only getting a third of the game without the painting and building,” Petrulis added.

With the painting comes socializing, which reinforces the gaming community. Men ranging from seven to fifty-seven crowd around the table, exchanging tips about painting and converting miniatures. The occasional woman might drift in, most often with a male friend — or even to bring her occupied boyfriend some lunch. But according to McDonald, the store’s target population is men aged twenty-five to forty-five. Often the conversation drifts to all sorts of topics: from religious debates to paintball lessons and even culinary techniques.

“We all become friends because of the hobby shop,” explains Hoffman. “Sometimes people will sit here, and if there’s not enough space to paint, you’ll see what they’re doing, and you’ll say, ‘Oh, you’re working on that — this is what I can recommend because I work with that color.’” 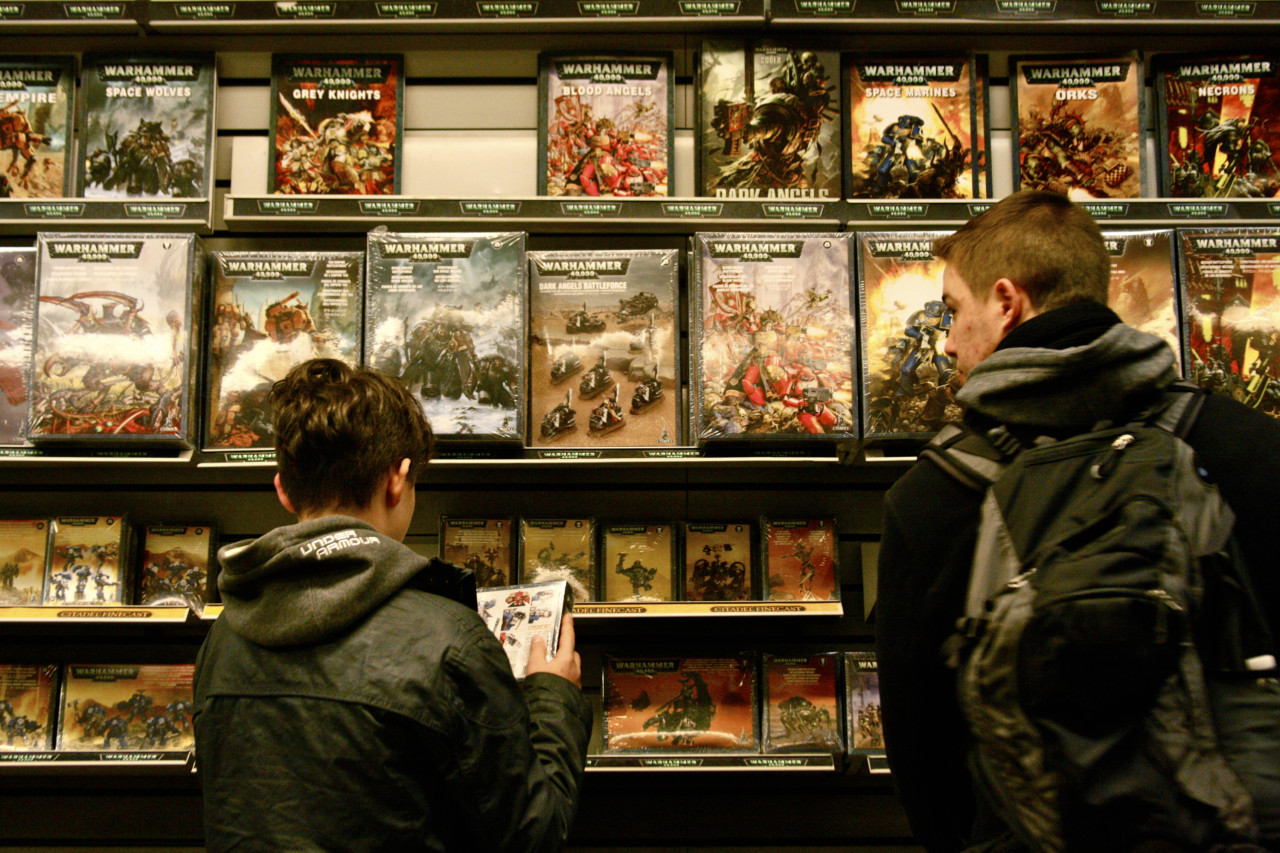 “You guys all know each other, it’s almost like a cult,” Petrulis said to Hoffman. “But I definitely think it’s a very inclusive community,” he assured. Indeed, McDonald regularly invites newcomers to “Beginner Sundays,” a chance to learn the game and practice in an environment more catered to teaching.

“It used to be like an exclusive frat; the ‘normal’ people were the ‘un-normal’ in here,” McDonald says. “But it’s not so much an indoor kid thing now; the pendulum has swung a bit.”

If the Warhammer community may come off as a friendly cult, Hoffman promises that it’s an easy one to join. “It’s like, ‘Here, we’ll hold the door open for you.’”

Just grab a paintbrush and introduce yourself.

Narratively explores a different theme each week and publishes one story a day. More stories from last week's theme "Gamers and Geeks":"The Trivial Life of Noah Tarnow," "Go Big or Go Home," "The Don of Data."