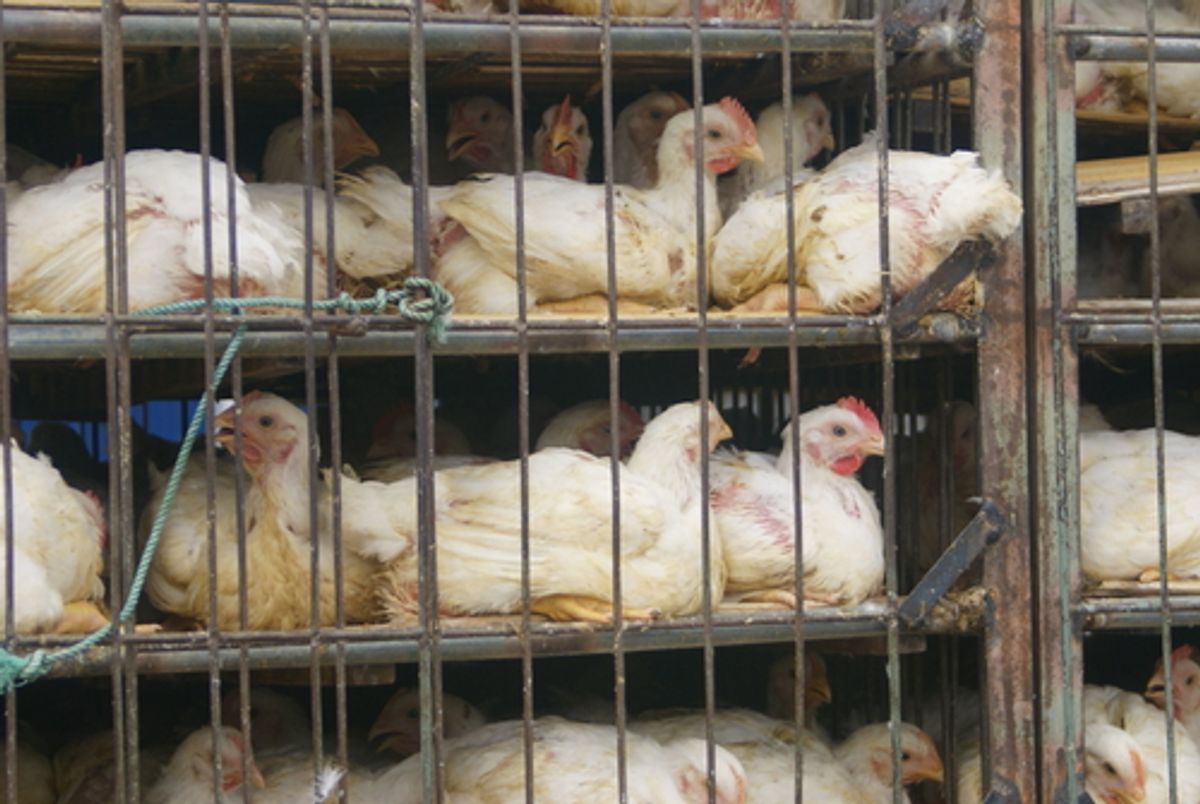 Farm lobbyists and supporting lawmakers want to close the shutters on video cameras exposing animal cruelty across the country. If they have their way, animal rights groups say they will lose an important tool for holding animal abusers accountable.

Examples of factory farm exposés leading to prosecutorial action seem to pop up every year. There was that time last year in North Carolina where a Mercy for Animals video showed Butterball workers kicking and dragging turkeys on the ground, along with a slew of other abuses. Once revealed, six of those workers were charged with animal cruelty. In 2011, a video from the Humane Society of the United States (HSUS) showed workers chemically burning the legs of Tennessee walking horses. Federal prosecutors quickly charged and convicted the suspects and credited HSUS for providing “evidence instrumental to the case.”

Tennessee is one of six states currently debating legislation that would ban this form of whistle blowing. So-called “ag-gag” bills vary in provisions, but all aim to make it more difficult, or in some cases, criminal, to shoot undercover factory farm footage. Last year, the statehouses of Missouri, Utah and Iowa passed ag-gag bills, bringing the total number of states with such laws to five.  As Think Progress’ Katie Valentine notes, many of these laws received backing from the American Legislative Exchange Council.

Arkansas lawmakers introduced two bills. SB14 (pdf) would make it illegal for people or employees to record video of livestock “with the purpose to cause harm to the livestock or poultry operation.” Another bill, SB13 (pdf), would ban anyone but law enforcement from investigating animal abuse cases. Violators would commit a Class A or B misdemeanor.

California’s ag-gag legislation, Assembly Bill 343, would force advocates to turn over condemning footage within 48 hours after it was shot.

“If an abuse has occurred and they have evidence of it, why are they holding on to it?” Dale Moore, executive director of public policy for the American Farm Bureau Federation, told the New York Times.

“Although AB 343 is not as bad as some others that ban outright recording and videotaping at animal facilities, it would effectively hamper animal welfare undercover investigators and employee whistle-blowers who are collecting information on a systematic animal cruelty at meatpacking plants, slaughterhouses, livestock ranchers and farms. It should be put out of its misery and killed quickly in committee.”

Indiana’s SB 373 already passed the state’s upper chamber and is likely on the way to passage in the General Assembly. It would make videotaping livestock with the intent to “embarrass, annoy or harm the business” a Class A misdemeanor. Like California, the bill grants immunity to filmmakers if they report their footage within 48 hours of shooting.

As Food Safety Newsnotes, farming interests are pushing hard for the bill. Farming interests have framed it as a privacy issue, testifying in front of lawmakers that animal rights “radicals” produce misleading videos that “misrepresent animal agriculture.” A statement on the Indiana Farm Bureau’s Hoosier Ag site says SB 373 “skillfully walks the line between privacy and the protection of animals.”

HSUS’ Anne Sterling said SB 373 would “create a safe haven for illegal and unethical activities in the state and gives the ag industry a black eye.”

Nebraska’s LB 240 makes it illegal to sign up for a factory-farming job with the intent of producing undercover videos. AsFood Safety News reported:

Section 3 of the bill says that if a person makes a “false statement” in an employment agreement with the intention doing an animal facility “economic harm” or “doing serious bodily injury” to someone, the criminal violations kick in.

The bill also contains a 24-hour reporting requirement, half of California and Indiana’s already strict window.

Pennsylvania's HB 204 would make recording factory farm operations a felony. Cody Carlson, a former investigator for Mercy for Animals, recounted to theAtlantic how his six-week long investigation of a Pennsylvania hog farm sparked a national dialogue over a particular farming technique. Carlson taped the use of gestation crates which forces pigs to endure extreme confinement in “metal cages barely larger than their bodies.” Carlson says his video helped New Jersey ban the practice this year.

As mentioned earlier, Tennessee was home to an undercover video that led to federal prosecution for horse breeders illegally burning their animals’ legs. Now, bills introduced in both the state’s House (pdf) and Senate (pdf) would require all advocates turnover video within 24 hours or face criminal charges.

In 2010, federal officials shut down a Vermont slaughterhouse after an undercover video produced by HSUS showed workers slapping, kicking and shocking newborn calves who were to weak to stand. The facility’s co-owner, Frank Peretti was convicted on animal-cruelty charges.