As Michigan challenges for the NCAA crown, the most infamous timeout of all time rears its ugly head. But that's OK 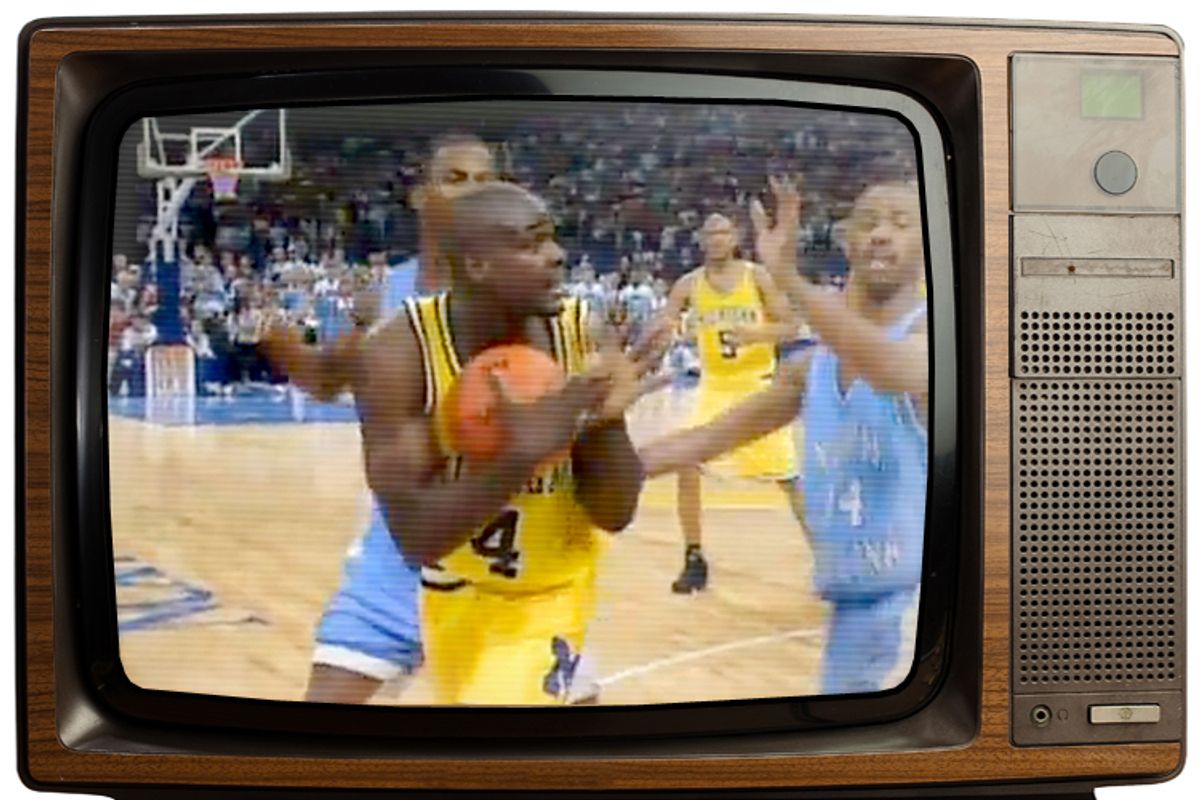 I just did something that caused me great pain. Something I've avoided for 20 long years. I watched a replay of Chris Webber's infamous timeout at the end of the NCAA championship game against North Carolina in 1993.

Every basketball fan knows the story: Michigan was out of timeouts, but Webber panicked, resulting in a technical foul against the Wolverines and nailing the coffin shut on the Fab Five's second straight championship game loss. It was a true stunner. Before the timeout, Webber was in the conversation for greatest college basketball player of all time. After the timeout, he became a national laughingstock.

Memory is a bitch. For all these years, I have excused Webber's horrible mistake by arguing that the game was already all-but-lost for Michigan when he choked. But just now, rewatching it (thanks for nothing, YouTube!), I saw that there were 11 seconds left on the clock and the Wolverines were only down two points and had the ball right next to their own basket. A potential tie or even a win was utterly within the realm of possibility. We've seen much more unlikely finishes during this year's tournament; most notably, the incredible game-tying 30-foot three point shot against Kansas launched by Michigan's current super-sophomore Trey Burke.

If my subconscious had a reason for avoiding the video all these years -- I couldn't handle the truth! -- I can only imagine how hard it must be for Chris Webber, particularly on this day of all days, with Michigan finally back from the depths to which he sank the program. Will he show up in Atlanta to see another band of Michigan kids go for the title? Can he forgive himself? Can we forgive him?

I forgive Chris Webber. But I always forgave him. I graduated from the University of Michigan. Michigan's 1989 NCAA championship helped me get through a divorce. (Oh, the sweet, sweet shot of Glen Rice. The clutch free throws of Rumeal Robinson!) The Fab Five, despised as "thugs" by so many on the national scene for their breakthrough baggy shorts and hip-hop style (Egad! They listened to NWA in the locker room!), were my team. How could I not fall in love with Chris Webber's radiant smile? Those young men delivered more thrills in two seasons than most college basketball fans get from their alma mater in a lifetime. Winning a single game in the NCAA tournament is a blast. Getting to the title game is amazing. Getting there twice in a row? Absolutely fantastic!

But talk about your nasty karmic paybacks. The gods of basketball decreed: It is hubris to think you can have five freshmen take you to a championship game without paying some kind of price. The timeout fiasco was only the beginning of the disaster. Much worse was to come. Chris Webber, it turned out, had been taking money from a Michigan booster since middle school -- a lot of money -- as much as $400,000. In the aftermath of the scandal, all the games won by Webber's teams were "vacated" -- in the record books, it's as if they never happened. No banners hang at Crisler Arena marking two consecutive championship games. Webber even lost his 1993 All-American honor and was forced to "disassociate" himself from the University of Michigan for 10 years. The Michigan program went into a protracted tailspin.

So from a fan's perspective, there's a lot to forgive, or continue to nurse with simmering hatred. Which may explain why, as of this writing, although the other four members of the Fab Five -- Jalen Rose, Juwan Howard, Ray Jackson and Jimmy King -- have made plans to be in attendance tonight in Atlanta, there hasn't been a peep from Webber, despite the entreaties of his former teammates. I totally get it. An appearance by Webber rips the scab off the wound, forces a renewed reckoning with not just the timeout, but the way Webber symbolized -- or is supposed to symbolize -- the corruption of college sports.

Bring it on! I am in the camp that believes that players are the last people who should be blamed for the consequences of what happens when money and "amateur" athletics intersect. Vast fortunes for schools, coaches and television networks have been built on top of their labor, and only a tiny percentage of the kids exploited for their skills ever see a serious payday. So spare me the moralizing about Webber's "lies." Yes, Michigan suffered tremendously from Webber's entanglement with the booster Ed Martin. But Michigan chews up young African-American athletes and spits them out by the score every single year. Who should be apologizing to whom?

The fascinating thing about Chris Webber is that he has never publicly come to terms with his Michigan melodrama, even while his career as an NBA player recapitulated the tropes of his essential story line with a flair that most ancient Greek tragedians would consider ludicrous overkill. During a stretch at the turn of the century, Chris Webber was the best power forward of his generation. He transformed one of the most dismal franchises in the league -- the Sacramento Kings -- into the most exciting, exhilarating basketball team on the planet. And yet he still couldn't grab the gold ring. He could not get past the Lakers (whether you blame fixed officiating or bad free throws is irrelevant; the bad karma is still the same), and then he couldn't get past his own bad knees.

And then he didn't participate in Jalen Rose's wonderful documentary on the Fab Five. And he might not even show up for what could be the best Michigan party since 1989. It's hard to argue with the proposition that the basketball gods are really pissed at Chris Webber. The man is cursed!

Of course, it's a stretch to say we should feel sorry for someone who parlayed his athletic talent and two years of Michigan success into contracts worth hundreds of millions of dollars. When I watch or listen to him work as a pretty good NBA analyst for TNT I don't see or hear a man who looks particularly tortured. But I still feel sorry for Chris Webber. The timeout and the booster payments mix together in a toxic brew that is too much for any one man's legacy to handle. I wonder if the real reason he might not go to the game tonight is because he wants to avoid the potential trauma of a last-second failure of nerve by one of Michigan's young players becoming linked to his own history. You know the camera will find Chris Webber's face if Trey Burke does something incredibly stupid as the last seconds tick off the clock. Maybe it makes sense to stay out of the stadium.

But that would be too bad. Win or lose, this Michigan team has already provided some of the greatest thrills I've ever had as a fan. I'll still love them if they fail, like I've always loved Chris Webber, in spite of his epic fails. I want to see his smile again: perhaps when Mitch McGary flings a lightning-dart pass from the high post to Nik Stauskas waiting on the wing or when Trey Burke launches an impossible three that insanely finds the net.

Yes, the system is fucked up, we all know that. But that's not Chris Webber's fault. So go to the game!

We know he wants to. In a a tweet sent out Sunday from Webber's verified account, he accompanied the words "It's Your Time Now" with a picture of the current Wolverine team. But that's not quite accurate. For everyone who follows Michigan, it's "our" time now. That's what fandom is all about, win or lose, whether or not you have a timeout left or hit or miss the potential game-winning shot. You can rewrite the record books, but you can't vacate what's in our hearts.