A new season, same old crazy Don: All hero on the outside, big fraud on the inside. Let the slow descent begin! 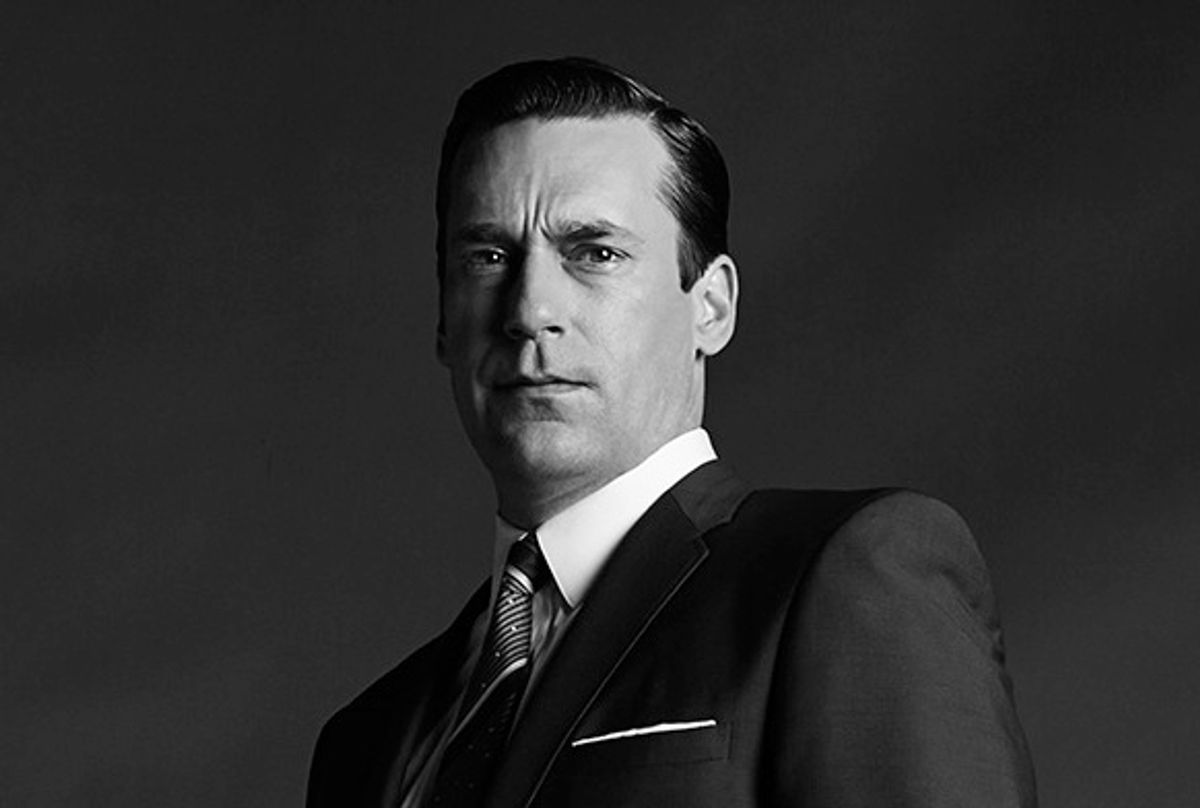 Beloved Salon vet Heather Havrilesky is back to recap this season of "Mad Men." We'll post here every Monday at 9 a.m. ET.

WARNING: Don't read this recap if you haven't watched the 6th season premiere of "Mad Men."

"People will do anything to alleviate their anxiety." – Dr. Arnold Rosen

Whenever a wise and heroic character appears on "Mad Men," you know that Don will find some way to destroy him. That's how Don alleviates his anxiety, after all – by crushing all truth and beauty to dust under his shiny black wingtips. So when Dr. Rosen, Don Draper's charming new friend and neighbor, explains Don to himself right before skiing off through the snow to save someone's life, it's obvious that Don's not going to stand for it.

Enter Silvia Rosen, who's chosen a rather literal interpretation of her husband's instructions to "keep it in the building." Don's cheating again – no surprise there. But thanks to show creator Matthew Weiner's knack for sly storytelling and creepy omens, Don's infidelity lands like a baseball bat to the gut. If Weiner opened the episode with the doorman's heart attack, then showed us how Don and the surgeon's wife met and began flirting, not only would that feel too familiar to offer as much dramatic impact, but it would obscure the real object of Don's strong feelings: Dr. Rosen. Ever the paragon of imperialist greed, longing and envy, Don can't handle sharing oxygen with a true hero. This is Don's life-long undoing: He's all hero on the outside, and fraudulent, covetous worm on the inside.

In case this repeated theme escapes us, we begin our journey in paradise (Hawaii!) where Don is reading Dante's Inferno. (Oh, Don.) As the colors, sights and sounds of paradise only seem to make Don look more and more agitated, we have to wonder: What's eating this guy? Why is he wincing when Megan gets up and dances at the luau? (A clear callback to "Zou Bisou Bisou," Megan's defining moment as a somewhat laughable "non-artist with an artistic temperament" as her mother puts it.) But doesn't Megan's carefree laughter always mean that something is amiss? And why does Don take the time to give his neighbor a free camera? Even before we know about the affair, we're wondering how Don can tolerate knowing a man whose career actually serves an honorable function in the world.

He can't, of course. What's brilliant is how Weiner manages to combine Don's biggest weakness (his needy ego) with his biggest fear (death, or disappearing) in the form of his doctor neighbor. Where Don once grappled with his identity first and foremost (echoes of this are seen in Don's stricken expression when the photographer tells him, "I want you to be yourself"), now he will grapple with death. The hints to Don's impending existential crisis are littered throughout the episode: in the doorman's near death, Roger's mother's death, the shoeshine man's death, and in the disappearance of Don Draper himself as foreshadowed by the Blue Hawaiian ad that the client proclaims "morbid."

Don isn't the only one struggling with an existential crisis. "Life is supposed to be a path, and you go along and these things happen to you and they’re supposed to change you, change your direction," Roger Sterling tells his analyst. "But it turns out that’s not true. It turns out the experiences are nothing. They’re just some pennies you pick up off the floor, and stick in your pocket, and you’re just going in a straight line to you know where." Later, the lack of emotion Roger shows in response to his mother's death feels disconcerting, but it all pays off with his sobbing over poor Georgio's shoeshine kit. Who didn't get choked up when Roger opened that sad little box, so personal, but so small? And it made sense that Roger didn't arrive at this low moment by, say, sifting through his mom's old sweaters. For Roger, nothing is more devastating than the notion that a man's entire career could boil down to a battered little box with a brush in it. Throughout the episode, Roger has been looking for some proof that he's more than just a pathetic has-been and a wallet to his loved ones. When he yells, "It's my funeral!" at his mom's funeral, he means that literally. Roger feels like he's already disappeared, and he's casting around (Jane? His ex-wife? His analyst? His daughter?) for someone who can actually see him. (Read an interview about this episode with John Slattery, the actor behind Roger, here.)

Betty solves the problem of disappearing by appreciating a young girl's violin ("Please? It makes me feel so much.") – and by snacking at midnight, chasing down a wayward girl, teaching some hippies to cook, informing one that he has "bad manners," and then leaving him the girl's violin for free anyway. Betty may be the toughest character to parse on this show, partially because she doesn't know herself and is never sure what she wants. Does her dark dye job, in the wake of the kid's nastiness about her fake blond hair, signal a return to authenticity? More important, is January Jones really going to have to wear that chubby chin prosthetic for another season?

Peggy may be the only character who seems stronger and more sure of herself than ever. I love that Weiner is offering us a glimpse of what it looks like to work in a less glamorous office, surrounded by clueless schlubs. This sets the stage beautifully for Ted's arrival – sweet, intense Ted, who sweeps away Abe's goofy idealism like so much silly trash in one short but breathtaking scene. It's nice to see Peggy basking in her own glory instead of standing in Don's shadow for once. That said, Peggy's cold reprimands to her underlings echo Don's in the show's first season; it's clear that she's headed down the same path as Don eventually.

Don's path, meanwhile, is about to take a pretty sharp turn. "Midway in our life’s journey," Don reads on the beach, "I went astray from the straight road and woke to find myself alone in a dark wood." There are so many ways for devilish Don to go astray. But how will Megan react? Where Betty revealed herself as a true survivor from the first season, smoking indifferently while shooting pigeons out of the sky, Megan is much more of a fragile flower. "So you’ll still love me even if I’m a lying, cheating whore?” Megan jokes to Don in Hawaii. Only on "Mad Men" could such a tossed-off comment feel like a harbinger of doom.

It will take more than a lying, cheating wife to undo Don, alone in that "dark wood." Given Matthew Weiner's predilection for layering on the symbolism, you could guess that this sixth season might reflect the nine circles of hell. After all, in the first circle, Limbo, Dante encounters historical figures like Julius Caesar (referenced by Mark Antony in Peggy's Super Bowl ad?) as well as the first doctor, Hippocrates (see also: Don's neighbor).

Where does this journey end? A drunk soldier on leave from Vietnam gives us some indication. "One day I’ll be a veteran in paradise," he says, and it's difficult to separate his longing from his melancholy. Isn't that always the case on "Mad Men"? Like every late capitalist antihero worth his salt, longing has always been Don's undoing. (And it seems like that swapped lighter is going to come back to haunt Don, too.) From a foreboding take on heaven from a doomed soldier to the suicidal imagery of Don's Blue Hawaiian ad to the suicides of Don's half-brother and Lane to those Falling Man opening credits, it's not hard to guess what the fates have in store for Don. "When you died, what did you see?" Don asks the doorman. "Did you hear the ocean?"

But death is the end to all of our stories, as Dr. Rosen points out, no matter how anxious we might be to distract ourselves from that fact. Clearly, we won't be spared a close-up of Don's demise. Who knows what lies, betrayals and horrors await him? Only one thing's for certain: It's going to be a long, slow, vivid fall.