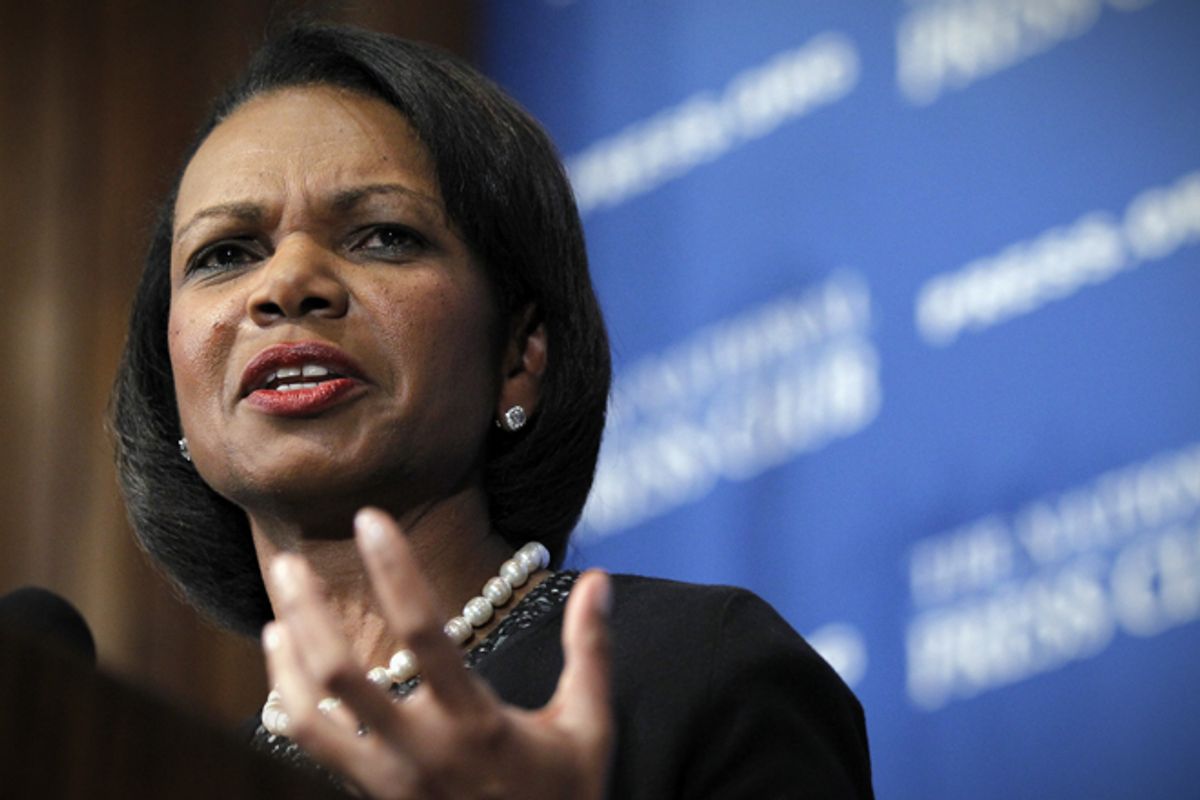 AUGUSTA, Ga. (AP) — Phil Mickelson has won three green jackets, and he was the one asking all the questions Sunday during a practice round at the Masters.

"Awesome," Mickelson said after playing 18 holes with his agent and Augusta members Rice and Lee Styslinger. "She's one of my favorite people to be around. She's so knowledgeable and interesting to talk to. I always learn so much. When I saw she became a member, one of the first things I did was schedule a game close to Masters time. The fact she's here, we were able to work it out. It was really cool."

Rice and South Carolina financier Darla Moore made history in August when they became the first women invited to join the home of the Masters.

Moore is not expected until later in the week.

Rice had lunch with Mickelson and then donned her green jacket to meet with other members on the practice range. Even though she has been a member for more than seven months, it was no less striking to see her in the elegantly tapered jacket that for eight decades had been worn only by men.

She slipped away without taking questions, which is not unusual. Members don't typically give interviews during the week of the Masters.

Mickelson couldn't stop talking about her — especially her putting.

They played a $10 game in which they rotated partners every six holes, and it ended on a big note — Rice made what Mickelson described as a 40-foot putt with about 18 feet of break on the final hole. That gave her a net birdie.

"Perfect pace," Mickelson said. "Her speed, touch, being able to read the greens. She one of the better members on the greens that I've seen."

"Every once in a while," Rice said as Mickelson gushed.

Sunday before the Masters is the last day members have the same access to the course as the players, and they occasionally play in the same group. Tiger Woods teed off with Steve Stricker and U.S. Amateur Public Links champion T.J. Vogel as Rice was finishing.

She walked over to the first tee to greet Woods, and they spent a few minutes chatting before Woods teed off. Woods spent two years at Stanford. Rice became the first black woman to be a Stanford provost in 1993, and she now is a professor of political economy at Stanford's Graduate School of Business. She's also one of the Cardinal's biggest sports fans, along with being a member of the U.S. Golf Association's nominating committee.

This day was just about golf — except for Mickelson's inquiring mind. Lefty was asked if their round ever reached a point that he hounded Rice with too many questions. Mickelson laughed and said, "She kept asking me about the golf course, and I kept asking her about countries."

Told about what Mickelson said, Rice laughed and said, "He's such a good friend. I've known him for years."

Mickelson was thrilled to learn Augusta National had invited women to join, and he said it wasn't long before he called Rice to arrange a game.

"As soon as I saw she was a member, I called her to work up a game, just like I did Arnold (Palmer) back in the day as an amateur," Mickelson said. "She's just one of my favorite people to be around."

Rice on the golf course — and later in a green jacket — attracted the most attention on an otherwise lazy day before one of the biggest weeks of the year.

Zach Johnson gave his caddie, Damon Green, the treat of a lifetime by inviting him to play. Graeme McDowell played with his University of Alabama-Birmingham golf bag in a game with Brandt Snedeker and Toby Wilt, an Augusta member who was Snedeker's winning partner at the Pebble Beach National Pro-Am.

The club's pro was on the tee, sending out members and players, just like any other country club. Masters week officially begins Monday, with the tournament starting Thursday. Yet, some players, like Mickelson and Adam Scott, have been around all weekend getting in their preparations before it gets too busy.

"My work is done," Scott said. "I've mapped out what I wanted to do. The course is the best I've ever seen it."

Mickelson did not plan to return to the course until Tuesday. Scott said he would putt for about an hour on Monday, and perhaps play nine holes Tuesday and Wednesday. He looked across the course, empty of fans, realizing it would be packed for the rest of the week.

"The next three days will be about having fun," Scott said. "And then you switch it back on for Thursday."