Thatcher: A female icon, but not a feminist one 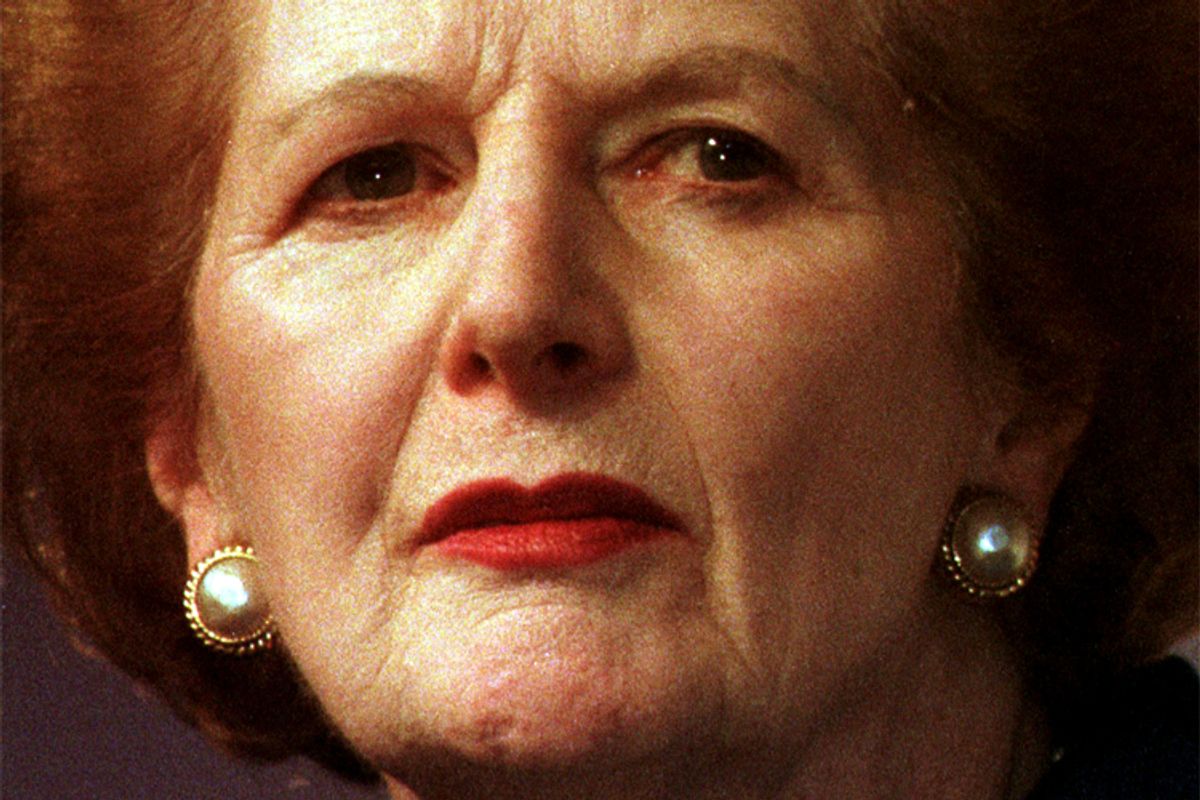 There have always been women like Margaret Thatcher in power. Never more than one or two at a time, of course. Thatcher was the embodiment of what Katha Pollitt memorably called "the Smurfette syndrome," which is when "a group of male buddies will be accented by a lone female, stereotypically defined." She was not a feminist icon, nor any kind of feminist, as she took pains to remind people. "Some of us were making it before women's lib was even thought of," she once sniffed. To make it any more obvious, she might as well have literally kicked the ladder out from under her.

For decades, Thatcher's gender provided some public relations cover for her most noxious politics. That was true even today in the White House's statement on her death, which included the following treacly sentence: "As a grocer’s daughter who rose to become Britain’s first female prime minister, she stands as an example to our daughters that there is no glass ceiling that can’t be shattered."

Leaving aside for a moment the particulars of what Thatcher did once she shattered that ceiling -- on which there will be much to say -- what sort of example did Thatcher provide to "our daughters"? It was a model that studiously projected traditional femininity while behaving in a brutally uncompromising fashion. The most vivid example of this was the time that she slammed her famous handbag down on a table at a meeting and snapped,"I haven't much time today, only enough time to explode and have my way."

It wasn't all ladylike veneer, of course. When Thatcher banned free school milk for children in primary schools over the age of 7, earning her the nickname "Margaret Thatcher, Milk Snatcher," she was the living opposite of a nurturing mother. And the pearls could only take her so far when "Ditch the Bitch" was considered a viable slogan. This, by the way, was a bridge too far for British feminists who could walk and chew gum at the same time -- that is, deride her policies while condemning sexism against her. "Sexist abuse such as bitch, cow and other less printable epithets make many women trade unionists feel they are outsiders in a movement that has such feelings of hatred towards Thatcher purely as a woman," wrote Fightback for Women's Rights, a group associated with the Labour Party, in an open letter in 1980.

By the same token, it's possible to have the following measured approach to what Thatcher did for women's representation in power: It's better to have women in public life, even when we vehemently disagree with them, than to have no women in public life at all. Every single one counts toward the normalization of women in charge, however abhorrent their policies. Thatcher herself was a necessary rebuke to essentialism, to the humanity-constricting idea that women are inherently more collaborative, peaceful or nurturing. Bella Abzug once said, “Our struggle today is not to have a female Einstein get appointed as an assistant professor. It is for a woman schlemiel to get as quickly promoted as a male schlemiel." She was talking about female mediocrity, but the same goes for female wrongness.