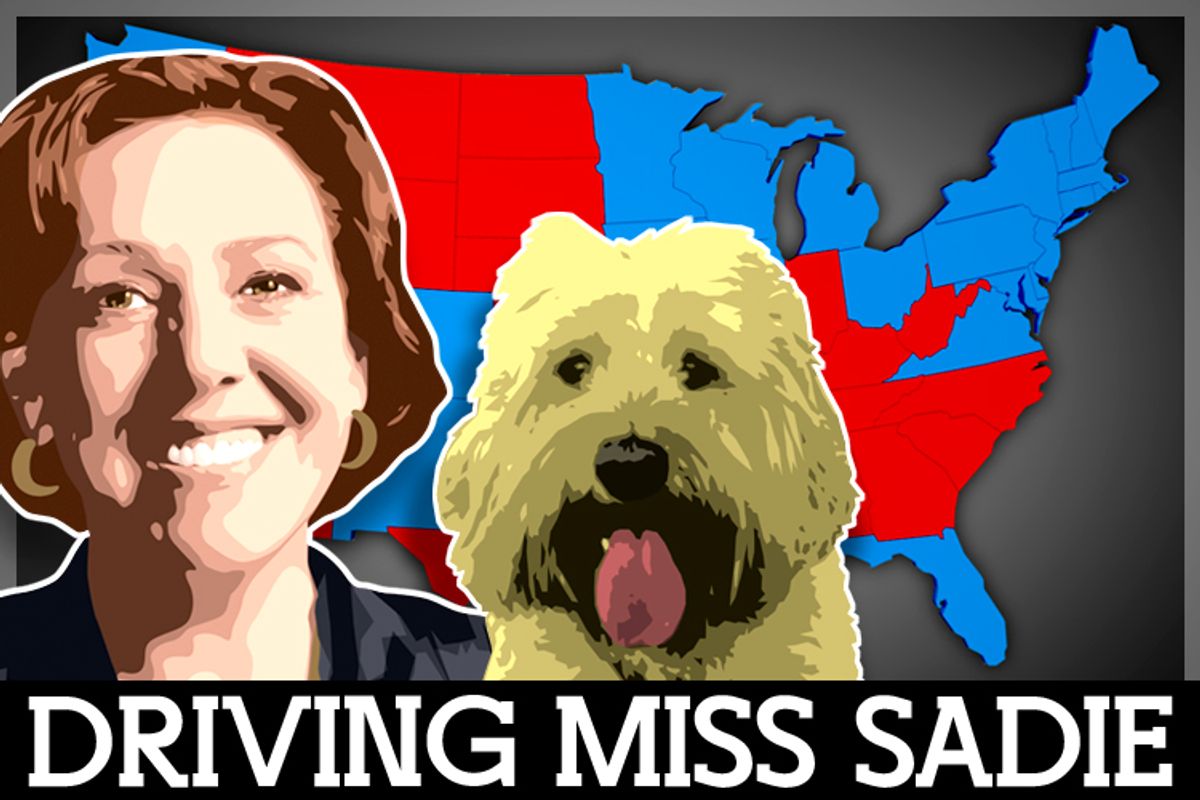 As part of my ongoing road trip across the country with my dog, Sadie, I planned to spend two days in Boulder, but wound up with no choice in the matter: We’re socked in with about a foot of snow. I tried to race the storm to Boulder on Monday, but it found me in Evanston, Wyo., when I woke up yesterday morning.

I complained in my last post that it’s been hard to meet people since I’m averse to leaving Sadie alone in a hotel room. But in Evanston I met a drunk welder in a cowboy hat as soon as I checked into my dog-friendly Best Western. “Hey, good lookin’,” he said, and I can state categorically that I was not good looking at that moment: dirty hair, no makeup, boots still salty from our trip to Bonneville Salt Flats.

(Oh, here’s Sadie, before she got salt poisoning.) The cowboy welder asked me to dinner, but I said I had to stay in with my dog, which he mocked (most people, to be fair, would probably mock me). He asked what I did, and when I said I was a writer; he replied, “Well, I’m a story” --  a story I’d regret missing if I didn’t have dinner with him. He tried to tantalize me – not only was he a former Denver Broncos player, he was a Navy SEAL. But something about the too-small cowboy hat, his electric cigarette and the fact that he seemed dead drunk at about 6:30 at night made me pass up the opportunity. When he saw me at the restaurant later picking up my carry-out steak, he snarled, “I’d have paid for that.” What might have been …

The steak wasn’t bad, but steak on Styrofoam is a little depressing. The next morning I woke up early to race the storm, and found 2 inches of snow already blanketing my car. I threw the ball for Sadie in the totally empty Best Western parking lot – no time to search for dog parks – and packed the car. I didn’t have time to stop in my favorite Wyoming spot, Green River, where I’d stayed on my trip 28 years ago. As long as I had clear weather and a sleeping dog I had to drive like a maniac.

We stopped in Rawlins for lunch at a sweet cafe, Huckleberry’s. I tied up Sadie outside, and people came out to keep her company. They’re not as familiar with silly dogs like labradoodles away from the coasts, so I spend a lot of time explaining why she has such a silly breed name but is nonetheless the world’s best dog. It began to flurry in Rawlins as we hit the road, and the rawness of Wyoming hit me – it would storm, then turn to sunlight. It was 37 degrees; 15 minutes later it was 55. There were blinking high-wind warnings, and I was particularly chastened by frequent signs that said, “If lights are blinking, I-80 is closed. Turn around,” followed  by a big fence that would be locked in a weather emergency. I didn’t remember these signs, or even the possibility of a weather emergency in Wyoming in February 1985. Back then, I flew across country in bright sunshine, protected.

For a while, to stay calm, I let myself listen to my own music and my travel playlist: Rosanne Cash's "500 Miles," Michelle Shocked "Come a Long Way," various Richard Buckner and then the Magnetic Zeros' "Home."  Then I remembered my promise to you, the reader, that I’d get out of my comfort zone at least via the radio. So I found Sean Hannity and listened as he blew hot and cold as the Wyoming weather. Hannity is very, very upset these days about the way liberals abuse black conservatives. “If you’re a black, and a conservative,” he said, you are regularly a victim of white liberal racism. He was hyping his Fox show that night, which was going to feature Dr. Ben Carson and “a studio audience of black conservatives.” Whoa!

I didn’t get to watch it, but from the transcript it sounds like a riot. Hannity played a clip of my MSNBC colleague Touré calling Carson the GOP’s new “black friend,” and raged, “If you are African-American and you are conservative, in this country right now, you are vilified, you are demonized, you are besmirched, your character is assassinated because sadly it is episodes like this that lead me to believe there is no freedom of speech for black conservatives right now in America.” He and Ben Carson traced the strategy all the way back to Saul Alinsky -- you know, Obama’s supposed mentor. Author Deneen Borelli insisted Obama “has a war against black Americans.” Our black president turns out to be the real racist, according to Hannity and friends.

Back on his radio show, Hannity was also ranting about Jay-Z and Beyoncé visiting Havana, and promised to get to the bottom of how they received permission (since visits are limited to scholars and journalists). Increasingly, he seems obsessed with proving there are two types of black people: good black conservatives like Ben Carson, who are being mistreated by bad black people like Touré, while black pals of the president like Bey and Jay live the high life and maybe even break the law. As the sky darkened over Cheyenne and the wind got wilder, I decided Hannity’s siege mentality wasn’t good for my psyche, and switched back to music.

I made it from Rawlins to Boulder without stopping, and when we arrived it was 62 degrees and sunny. My friend Mary has a great place with a huge yard and Sadie made quick friends with her two Golden Retrievers. Mary made a great chicken dinner and listened to three days' worth of pent-up road stories, since I hadn’t had much conversation aside from the drunk welder in Evanston. It was impossible to imagine the temperature would plunge into the teens overnight, but it did, and we woke up to this.

So we took Sadie on a long hike, and she became a crazy snowdoodle, wading in the creek and running maniacally along the trail. The weather may not be any better tomorrow. I'm supposed to leave for Nebraska, but the forecast is kind of grim. I'm reminded that I was staying with an old friend in Milwaukee when Hurricane Sandy hit New York last fall, and I couldn't get home for four days. Once again I'm Calamity Joan; the guest who wouldn't leave. But this is part of what travel does; it reminds you you're not running the show. Sitting by the fire watching it snow, with Sadie drying off at my feet, I'm where I'm supposed to be.