During an era of social and cultural revolution, the "Beach Party" star's wholesomeness proved subtly subversive 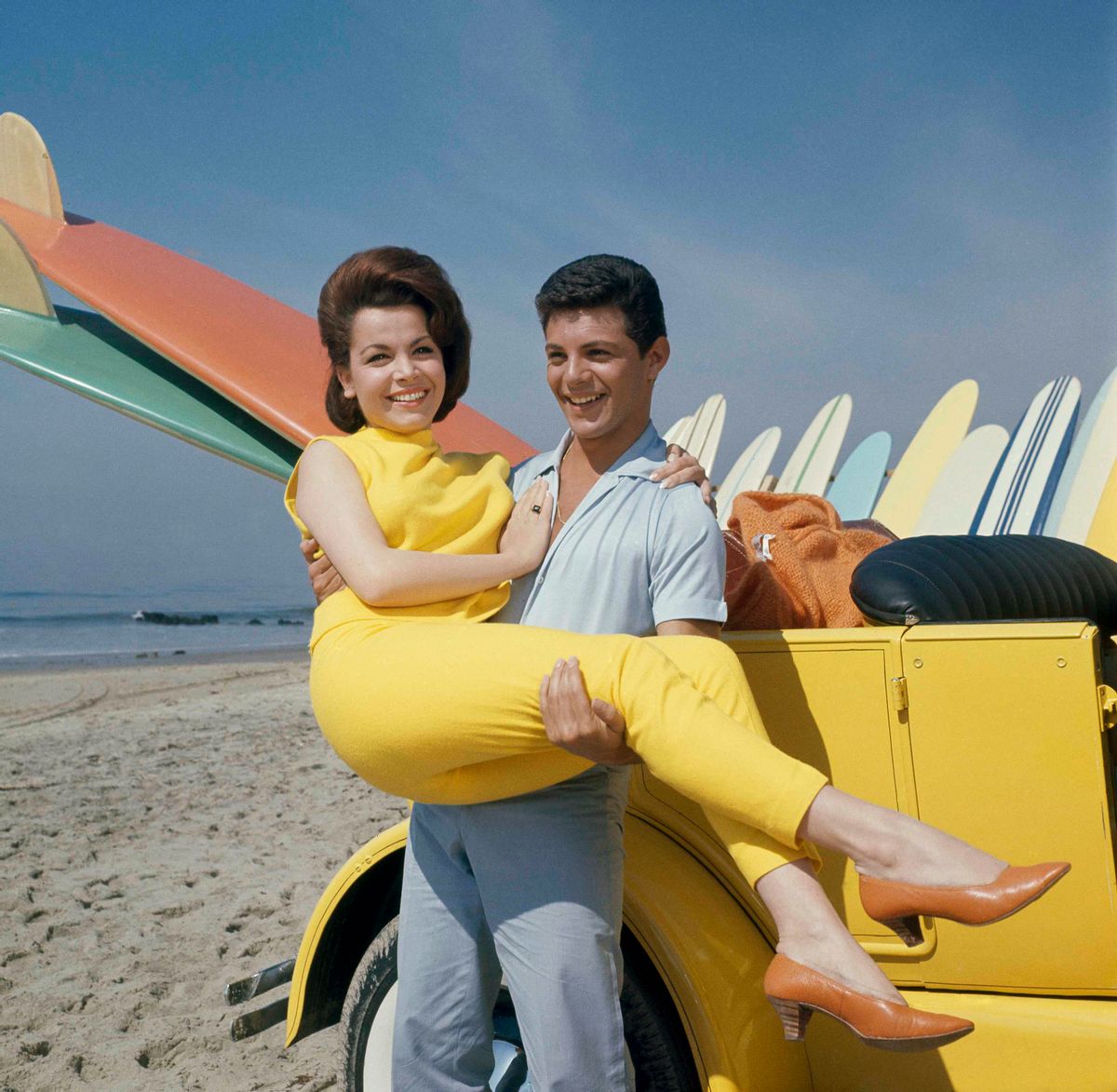 Frankie Avalon and Annette Funicello are seen on Malibu Beach during filming of "Beach Party," in California in 1963. (AP/File)
--

Damn Margaret Thatcher and her cotton-candy hairdo, sensible power suits and slightly less sensible pumps, her love for free-market capitalism, hatred of feminists and free school milk. What kind of person hates feminists and free school milk? Apparently, the kind of person who has the audacity to die on the same day as screen legend Annette Funicello.

I realize it might sound callous to argue that the death of one celebrity merits more attention than another, particularly when one was a leader of the free world while the other was chiefly famous for showing her navel in a series of films that the New York Times called “the answers to a moron’s prayer.” While it’s mostly meant in jest, I will say that at one point in my life, Annette Funicello meant a great deal to me, and certainly more than the Iron Lady ever has or will. And if she meant a lot to me, a child of the aughts who was born decades after her original audience hit puberty, I can’t even imagine how her fans from previous generations must be feeling right now.

Most people my age, if they know about Annette Funicello at all, know her as the frail, MS-stricken lady from the front pages of the National Enquirer, or the punch line to a joke about breasts in Rob Reiner’s "Stand By Me." Yet as an original member of Disney’s "Mickey Mouse Club," Annette Funicello was the first bona fide pop princess, the precursor to tween tarts like Britney and Miley and Christina and Selena.

Of course, Annette Funicello had little else in common with these women. She couldn’t dance as well as Britney, or sing as well as Christina (in interviews, she often referred self-deprecatingly to her “small voice” and “three-note” range). Unlike Miley, Annette wasn’t blessed with a showbiz pedigree — she was the daughter of an auto mechanic from Utica, N.Y. — and unlike Selena, she would never have tried to shed her good-girl image by appearing in a movie like"Spring Breakers," which features Gomez drinking, swearing and peeing by the side of a road.

Annette’s Disney successors have, at various points in their careers, endeavored to shed their girl-next-door personae.  Yet Annette Funnicello never wanted to be portrayed as anything but a good girl; by all accounts, that's precisely what she was. She was the anti-Spring Breaker, the girl who’d head down to Fort Lauderdale with her pals to catch some waves and roast marshmallows by a campfire, not do body shots at Señor Frog’s or flash a camera crew for a baseball cap. Annette was wholesome without being obnoxious, sweet without being cloying, and peppy without making you want to punch her in the face.

I first discovered Annette as a middle-schooler, while watching Disney Channel reruns of the "Mickey Mouse Club"; as someone who was not wholesome, sweet or especially peppy, these were all qualities that resonated strongly with me. Although I had been raised on the "New Mickey Mouse Club" (the Britney-and-Christina version), the Disney Channel would occasionally air reruns of the original series. Upon first viewing, it was instantly apparent to me who the real star of the show was (and it sure as hell wasn’t Cubby, although I do recall deriving amusement from the fact that some 1940s housewife had burdened her child with such a ridiculous name).

Annette’s swarthy good looks stood in stark contrast to the light skin and blond hair of her other female co-stars, none of whom had names that ended in vowels. In fact, in an era when it was considered revolutionary to depict so-called ethnic characters on television, Annette was one of the few Italian-American personalities at the time (though apparently she was considered ambiguously “ethnic” enough to play a Mexican-American character on three episodes of "Zorro"). Her exoticism may have contributed to her immense popularity: When she suggested to her mentor, Walt Disney, that she change her last name to Turner to seem more “all-American,” Disney demurred, saying that once people learned how to pronounce it, they wouldn’t forget it (given Disney’s alleged anti-Semitism, one wonders whether he’d make the same concession if her last name had been Schwartz or Kleinberg).

When Annette was 21, American International Pictures approached her to star in a beach party movie with 1950s pop star Frankie Avalon. Disney agreed to loan her out, on the condition that she not show her navel in the films. Rather than tell him, “Screw you, old man, I’m 21 and I’ll flaunt my umbilicus if I damn well please,” Annette agreed to wear a one-piece in the first movie of the series, "Beach Party." Yet in the succeeding films she shot with Avalon — including "Bikini Beach," "Muscle Beach Party," and "Beach Blanket Bingo" — the bottom half of her swimsuit creeps progressively lower and lower down her torso, to the point where her navel is fully visible. I like to imagine her surreptitiously adjusting her swimsuit bottoms in between takes, a small gesture of rebellion against ol’ Uncle Walt.

I rediscovered Annette through the first of her beach party movies, "Beach Party," which I made a few college friends watch on Netflix my senior year as part of a movie musical marathon. Although they quickly tired of the paper-thin plots and confectionary dialogue, I found myself inexplicably drawn to these movies and watched all of them at once during finals week. As beach bunny Dee Dee, Annette was just as perkily sexless and sexlessly perky as she was during her "Mickey Mouse" years, but there was also something about her that was winking, subtly subversive, and — dare I say it? — even feminist.

Although the beach party films are replete with sexist and misogynistic imagery, including close-up shots of comely beachcombers’ breasts and rear ends, Annette was, for the most part, spared that kind of cheerful objectification. This was in part because she was always Frankie’s property, destined to be a wife and mother rather than some beach bum’s arm candy, but it was also because the feisty Dee Dee made it clear that she wouldn’t stand for that kind of behavior, telling leering surfing boys exactly where they could shove their come-ons and innuendo — unless she, too, was game for fooling around. In "Bikini Beach," Dee Dee rebuffs Frankie when he won’t acquiesce to her demands for marriage by courting Potato Bug, a John Lennon-esque music superstar; in "How to Stuff a Wild Bikini," she defies Frankie’s wishes to stay faithful while he’s stationed on a naval base (because, he explains to his Tahitian mistress, “that’s what girls do”), by cavorting with a sexy, Don Draper-esque advertising executive. “I won’t give up,” he tells her. “I’d hate you if you did,” she says, without batting an eyelash. By 1960s standards, this is the equivalent of sending someone a Snapchat of your genitals.

After the beach party pictures fell out of favor in the late 1960s, Annette started receiving offers to play edgier, more adult roles. She had absolutely no interest in doing this. “People are more interested in changing my image than I am,” she said in an interview. “I read the first 10 pages [of scripts] and I’m a prostitute or a doper, and I fold them up and send them back.” Part of me wishes she had taken some of these parts, just so we could’ve seen her evolve as an actress, but part of me is also glad that she had the confidence to stay true to herself, even when it was considered un-hip or unpopular.

At the same time that I was watching the beach party movies, I was also researching a 10-page story on the civil rights movement. "Bikini Beach" and "Beach Party" were filmed at a time when youth involvement in the movement was at its peak, when bright-eyed students like Frankie and Dee Dee were more likely to spend a summer working in the CORE mailroom or training with Student Nonviolent Coordinating Committee than Watusi’ing on Florida beaches. I found myself both repelled by and attracted to the movies’ cheery complacency, their willful ignorance of the fact that the ground was shifting beneath their bare feet. As the decade wore on and the counterculture’s goodwill deteriorated, in a way it seemed to display a strange sort of courage that Annette and Frankie would stick to what they did best — catching some rays, cutting some rugs — while the world fell apart around them. Staying true to your wholesome, sweet, peppy self as your body slowly starts to fail you, as Annette’s did, requires the same kind of courage.

A lot has changed since the 1960s. It’s no longer considered revolutionary to put a girl with olive skin and a vowel in her surname on national television; it’s no longer expected of women to remain chaste while their boyfriends screw everything that moves, because “that’s what girls do.” Without a doubt, the world is far better off that way. But it is worse off for no longer having Annette in it.