Anti-gay rights activists: We are the real victims of the marriage equality fight

They would all "rather be doing something else," laments equal rights opponent Ryan Anderson 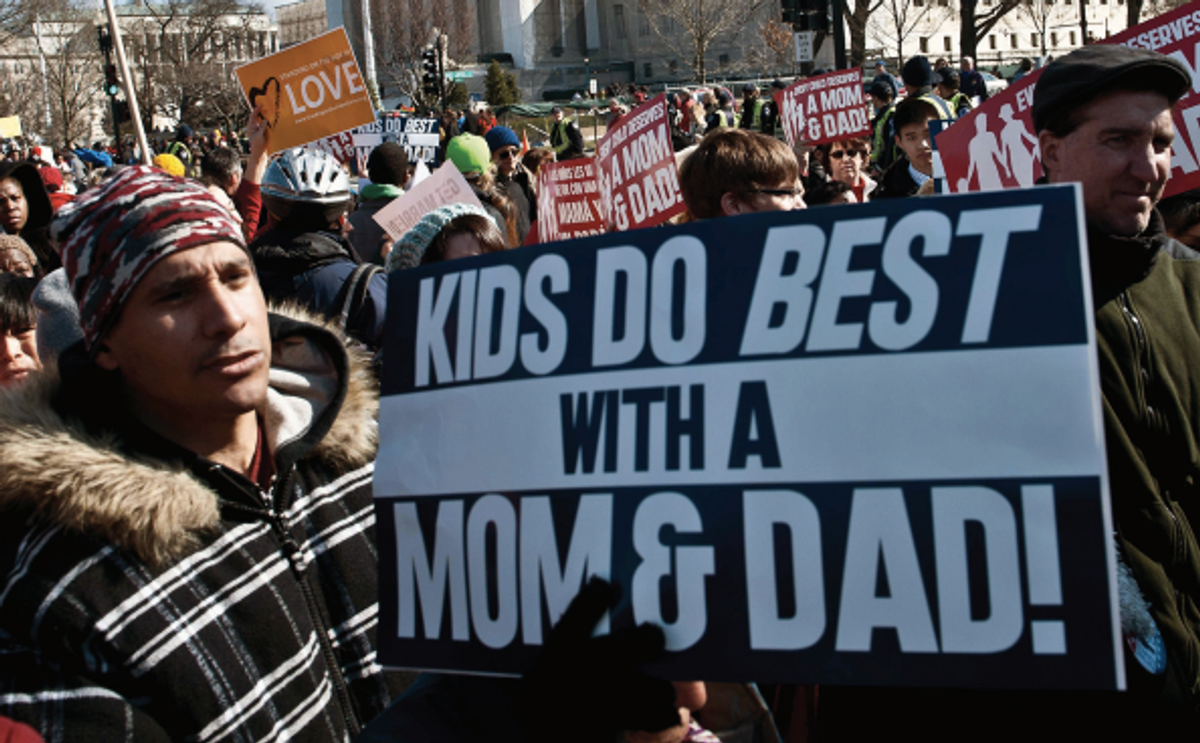 Ryan Anderson, anti-gay activist and author of "What Is Marriage? Man and Woman: A Defense" is really tired of spending his days working to deny gay couples and their families equal rights. And so are the other marriage equality opponents profiled in a newsletter from the Concerned Women for America.

On his role as the face of the Gen X anti-marriage equality movement, Anderson laments: "Everyone I know who is working on this issue would rather be doing something else, but we feel like we have an obligation to be doing this."

A snapshot of their many, many hardships, if you can bear to read them:

“I think marriage exists to bring a man and woman together as husband and wife to be mother and father to any children their union produces,” said [Ryan] Anderson during a live appearance that night on Piers Morgan Live on CNN. Anderson didn’t get invited to the studio’s table where Morgan sat with Suze Orman, the best-selling author, ﬁnancial guru and aggressive advocate for gay marriage. They looked down on Anderson from an elevated stage as he sat in the audience. The lecture they gave included calling the young conservative and his ideas bizarre, odd, oﬀensive and uneducated.

In February, a liberal group at Columbia University hijacked a Love and Fidelity values conference by reserving the bulk of the tickets. They interrupted the speaker, standing to protest with signs.But [Caitlin Seery, director of conservative Love and Fidelity Network] doesn’t believe the marriage cause is lost: “Just because things are polling one way today doesn’t mean that will always be the case. Forty years ago the media said that all young people are becoming pro-choice. We proved them wrong. The youngest generation is the most pro-life generation."

Their discrimination against gay people may get them discriminated against

Young Christians still will face growing temptations to conform to the world’s understanding that marriage is primarily about emotional fulﬁllment. The scorn they endure may one day include discrimination in the workplace. Anderson, for example, faces uncertain job prospects in secular academia as an author of a book defending traditional marriage.

Many of us have drafted oﬀ the importance of marriage for years. We’ve known at a subconscious level that this institution is important. Now that it is threatening to be undone culturally, we are waking up. It seems unthinkable even ﬁve years ago that this issue would be vaulted into the cultural mainstream.

[Alison Howard, CPAC "unicorn"] gets calls from her younger sisters in New Jersey who navigate a world where teachers advocate for same-sex marriages in the classroom. Her advice? Get away from cell phones, computers, and peers -- and pray.