I used to love the bride

People think I'm crazy for being in Ellie's wedding party. Four years ago, I thought she was going to marry me 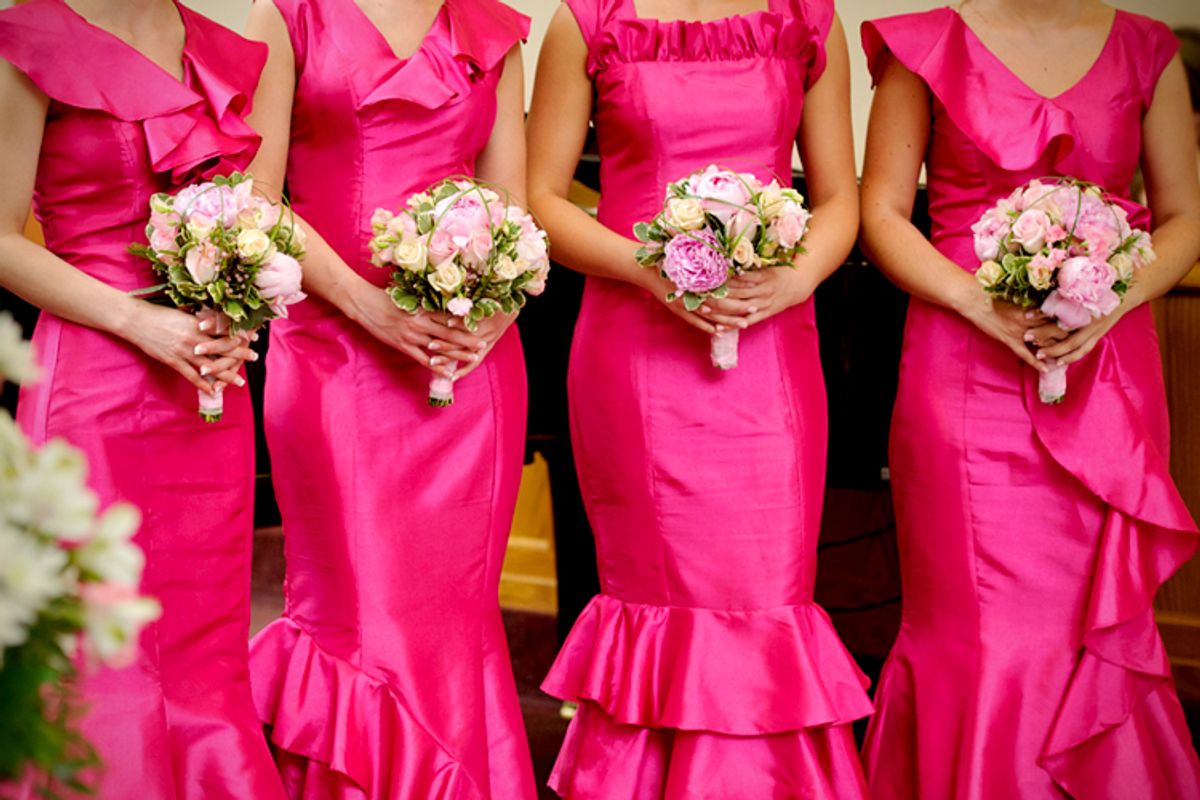 Ellie looked stunning in her white strapless dress, yellow sash hugging her waist, which was her small rebellion against the traditional wedding gown. “Dance with me,” she said, her face radiating a hue that can only be described as pure joy. As she held me in the silky glow of the lodge where she’d recently said, “I do,” all I could think was: This was supposed to be our wedding.

I’d proposed to Ellie in 2009 in the town where Sappho was born. At sunset, we climbed a hill overlooking the ocean and in a very ineloquent fashion, I asked her to spend the rest of her life with me. Despite the grand romantic gesture of a proposal, when we got home from Greece, we hardly told a soul about our engagement. Partially it was because we were in a new city and nobody knew us. Partially it was because gay marriage isn’t legal in California, so announcing our engagement felt a little like playing pretend. We wanted legitimacy, and not in the form of Facebook comments. But we couldn’t have it, so we accepted our new life as betrotheds without fuss or fanfare.

I didn’t have much time to worry about it, however, since soon after, I got a phone call that my dad was in the hospital with cancer and wasn’t expected to live 72 hours. It was only after seeing my father’s withered frame, his legs twitching involuntarily, the tubes in his throat, chest and hands, that I made my first wedding announcement.

“Guess what, Dad?” I told his unconscious body. “Ellie and I are getting married!” Whereas before I could offer nothing to whatever vengeful God surely controlled the universe, now I felt I had bartering power. I had the sacred institution of marriage on my side. “You have to get better, OK?” I continued. “So you can walk me down the aisle.” The fact that I’d never had the aisle-walking fantasy before didn’t matter. The moment I said it, it became my most sincere wish.

As a queer woman, a wedding has always been a confounding desire. Some days I want nothing more than a fancy dress, a big reception and a houseful of gravy boats and monogrammed towels. Other days I think it’s a sexist, outdated ritual that’s way too expensive for everyone involved and frankly feels rather selfish. “You want me to fly across the country to hear you make some vows and buy you a $100 blender?” I think this each time I’m invited to a wedding, even though I love weddings and would buy all the blenders in the world if it brought some joy to the couples in question. But I have qualms when it comes to my own life. I feel guilty for wanting to participate so ardently in an institution that rejects me for loving the “wrong” gender. Sure, on a state level, we’ve made some strides, and the potential outcomes of the two recent Supreme Court cases against Proposition 8 and DOMA might radically alter the way our nation views gay rights, but until gay marriage is federally recognized, an Iowa or New York marriage certificate would be symbolic at best, and a tax hassle at worst.

Slowly, my dad began to defy the doctors’ odds, but as his health continued its steady ascent, my relationship with Ellie took a downturn. A few months later, through many tears and painful confessions, she told me she wanted to date men. That our engagement was over.

Two years later, we were in India studying yoga. We sat by the pool of the Hotel Regaalis, and Ellie told me about the first time her boyfriend Peter said he loved her. “We both cried like lesbians,” she said, and we laughed the way only those who know each other so well could. The road to friendship for Ellie and me was both tortuous and the easiest thing imaginable. It took a long time for us to figure out how to be in each other’s lives, but my love for her never dissipated, it simply got renamed. So when she asked me to be in her wedding, I didn’t even have to think about it. “Of course!” I said.

When I told friends I was going to be a bridesmaid in my ex’s wedding, however, the look given to me was a look often reserved for telling someone their face is on fire. Some called me foolish, some said that I wasn’t over her, and a few even told me I was brave, as if I’d just climbed Mount Everest and not agreed to wear a nice dress and eat cake that someone else made. “I could never do that,” another friend said, and I thought, You could! You have no idea what kindnesses you’re capable of. But instead I said nothing. Defending myself as a bridesmaid seemed exhausting and silly, so I opted not to.

We made up the rules to our friendship as we went along, almost like we made up the rules to our engagement. These rules were both serious (“Don’t tell me about anyone you’re dating”) and inane (“Please try not to swoon so hard whenever Puck from ‘Glee’ comes on-screen”). In this way, we were both forced to lie to each other, softly, which was something we had never done before, but which was proved to be a necessary mercy. We stuck to neutral topics: yoga, Tyra Banks, Twitter, and for many months we didn’t talk at all.

I told myself I wouldn’t be friends with Ellie until I’d be happy for her when she found someone else. It sounded easy enough, but many of us never get there. I’m not arguing all exes should braid each other’s hair and sing “Wind Beneath My Wings,” however. We can’t be friends with everyone who has seen us at our most vulnerable. But it is possible, and in some cases, preferable to keep those people in our lives. Ellie is one of those people for me. So that fall, I put on a nice dress, I ate some cake that someone else made, and made small talk with people who had no idea the bride and I once knew each other biblically.

It was strange, I’ll admit, to be reintroduced to her distant family members, some of them quite conservative. It was strange to gloss over how we met and why we lived together. She never asked me to lie about our relationship, but it seemed unnecessary and gauche to throw a “Well, when we were lesbian lovers …” into the casual conversations. It was also strange to see how straight she had become in just a few years. Suddenly, it seemed, she knew a lot more about mascara. She talked with ease about ultrasounds and Disney Club memberships.

“Am I the only queer person here?” I asked during our dance.

“Hey, don’t forget about me,” she said, not wanting to give up the part of her past that was once open to marrying a woman. It was true, I had forgotten.

I kept waiting for someone who knew me first as Ellie’s girlfriend to ask if it was uncomfortable to watch her get married to a man, but no one said a word. Perhaps Midwesterners are more polite than most, or maybe, like me, they simply accepted the past for what it was, and had moved on.

There was a moment I remember a few months after we had broken up, but were still living together. Ellie burst through the front door in tears, kneeled down in front of the chair I was reading in, and took my hand in hers. “What’s wrong?” I said. “What is it?” Expecting that she was hurt or something worse. Instead she told me that she had found an apartment. She cried and it was like she was confessing an affair, something truly terrible, and not that she was moving on with her life. I think about that moment a lot. We were trying so hard. She was trying to hurt me as little as possible and I was trying to pretend I was OK and neither was going to work until we let go.

At her wedding reception, I gave a speech in front of a few hundred of Ellie and Peter’s friends and relatives. It was a much better speech than the one I made in Greece all those years ago, even though the sentiment remained unchanged -- I told her that I loved her, how happy I was for her, and how honored I was to be a part of her new life.