James Franco: I'm obsessed with "My Own Private Idaho"

When I asked Gus Van Sant to recut "My Own Private Idaho," I learned how much artists and directors owe Shakespeare 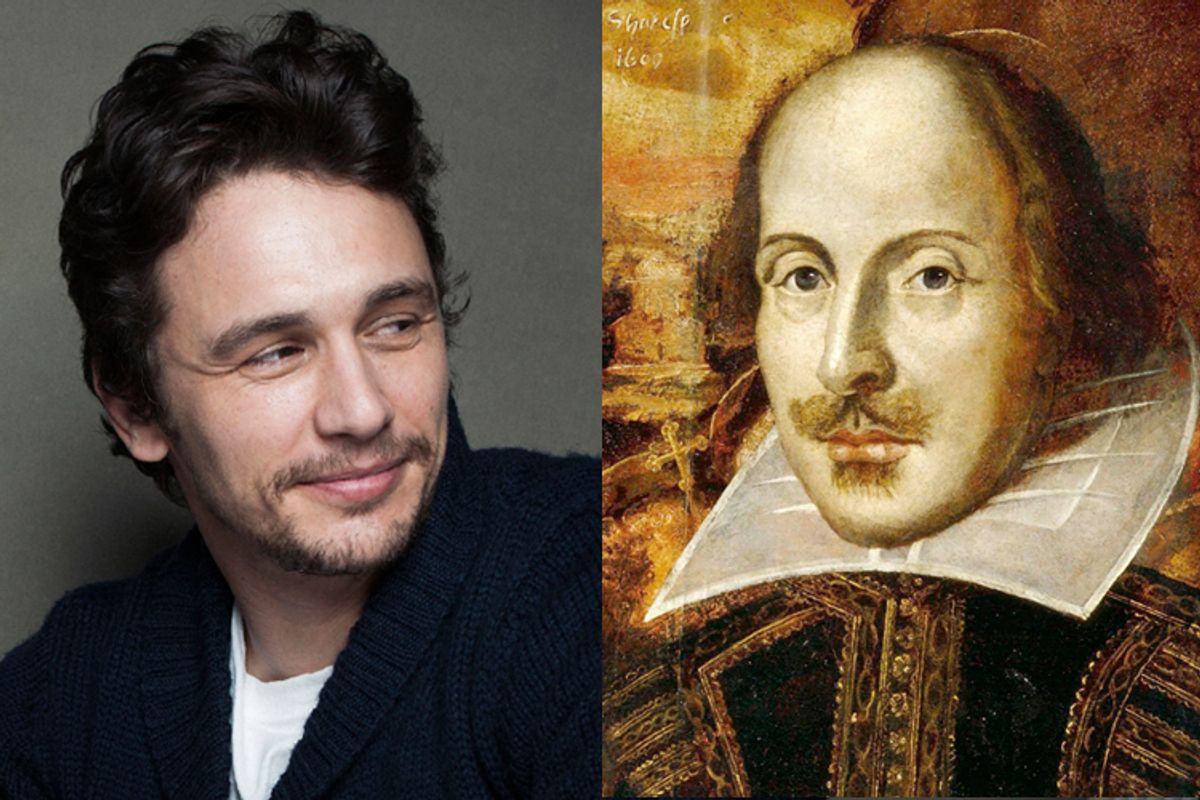 Excerpted from "LIVING WITH SHAKESPEARE: Essays by Writers, Actors and Directors"

I recently created a film called "My Own Private River," which was shown at the Gagosian in Los Angeles alongside paintings done by Gus Van Sant, the director of the original "My Own Private Idaho."

When I had the chance to work with Gus Van Sant years later on "Milk," we did premieres in New York, San Francisco and Los Angeles. Then Gus wanted to do a premiere in his hometown, Portland, and none of the other actors wanted to go. He knew I was obsessed with the film and he said “James, if you come to Portland I will give you a tour of all of the 'My Own Private Idaho' shooting locations” — as, curiously enough, none of the film was actually shot in Idaho. It was a dream come true, and so together we spent an entire day in Portland driving to the various sites, and along the way he told me stories about that filming experience. “You know,” he confided, “I kept all the old editor’s film reels from the movie.” It had been filmed in 1990-91, so they had cut it on actual film, which meant that Gus had hundreds of rolls of film in storage. “Are we gonna watch it?” I asked. “No,” he replied.

But several months later we spent two days watching as much of the twenty-five hours’ worth of material as we could. It was a project just to watch it -- and it was incredible. Gus hadn’t watched it since he had made the movie, and his style of making movies had changed in the intervening two decades. He had made a huge change in his aesthetic mid-career, having been influenced by minimalistic films, and his later films were characterized by minimal dialogue, fewer cuts, and very long takes. So, when we were watching those Idaho rushes again after those two decades, the question became, “What if you had cut this movie now?” For instance, there is a scene early on where it is just Keanu Reeves and River Phoenix walking down the street, and we found ourselves wondering, “What if you just held on that shot, and you stay on River’s head, and then you continue with him for much longer? What would that give to our sense of his character?”

They were intriguing questions, and after we got the reels digitized and I had my own copy of the material, I asked Gus if I could play around with it myself. When I suddenly had that uncut film that had been such a huge part of my teenage years right in front of me, it was poignant and exhilarating: we mark our memories by the cultural artifacts that we were engaged with when we were younger. I’ve done similar work before, using somebody else’s material that was formerly a part of one project, and then used it for a completely different project—but this was special because I felt like the material was incredibly valuable because of the film’s place in cinema history, and in River’s life. For those reasons, I didn’t want to go in there in a disruptive way: I wanted to go in there in a respectful way. To me the archive had an inherent value, for every take was one I could just watch. It was difficult to cut any of it out, and in the end I did two films. From the original twenty-five hours, I cut one film that was twelve hours long and another that was 102 minutes. In the twelve-hour version, there are multiple takes of the same shot, which was a way for me to deliver the material in a way that made it feel like it was an archive and yet also a portrait of the film-making process. In the 102-minute cut I found a way to work so that it wasn’t me trying to impose myself on it, but rather playing Gus, as though he were making the movie now.

When Gus wrote this script it was a compilation of three previous scripts. One was a movie that was about street kids in Portland; one was a movie about two Hispanic kids looking for their parents who eventually go to Europe; and then one was mostly Shakespearean dialogue in a contemporary setting. This last was based on Orson Welles’s Chimes at Midnight, which was a compilation of all the Falstaff sections of the Henry IV plays.

The other thing that Gus did, and which I pushed to the extreme, is that he focused on the Poins character, in this case Mike Waters, played by River Phoenix. Ned Poins is one of Prince Hal’s sidekicks: he masterminds the double robbery of Falstaff in the comic Gad’s Hill scene, but other than that plot function his purpose in the play is to bring the detail of character into that seedy but exuberant underworld. Shakespeare created 1,222 characters, and none of them are incidental: all are fully individuated. It is very moving to think about a side character, one out of all of these Shakespearean characters, then being given the spotlight. This attention is made even more poignant by Phoenix’s incandescent performance. Whether he was revealing himself through the role or not is made moot by the fact that it is arguably his best performance and that he was dead two years later. The performance caught on film is now infinitely more valuable because it captured the best actor of his generation at the peak of his powers. By cutting together outtakes of the unused material of the film, I was able to give more emphasis to the essential beauty of Phoenix and his work. Phoenix in my remix film, "My Own Private River," is singled out from all other actors and film performances for that matter—because it is presented in such an unflinching way—just as Van Sant singled out Poins in his original film.

Now the significance of "Idaho" has changed because River is gone, but you want him to just be there, you want him to keep going, you want to see what he can do, and you want to find all that is still alive and is still around that exists of him. Consequently, those moments that would immediately pull you out of a normal film, pull you into this film—at least they pulled me in—because River is walking around, he is alive again. What I mean is that you just want anything you can have of him. That sense of wanting time to stop goes back to the original, too: Henry IV is, among other things, a coming-of-age story. Prince Hal’s growing up is at once necessary and deeply poignant, and in many ways we want him to be able to remain a fun-loving, irresponsible kid with Falstaff forever. In a way, the length of the footage of the film I was able to cut, especially the longer version, serves to extend that moment indefinitely — since in an awful way River did grow up, and in another way he’s still in that happy hour before the end. Since I didn’t have all the economic burdens of the initial film, I was able to make a film with a much looser narrative. So whereas the original was driven by the need to tell a certain story, the film I made was driven just by River’s presence.

Shakespeare creates such a vivid, rich, and complex world that we can fruitfully focus on just one part of it and find inspiration for a whole variety of artistic endeavors: in this instance, the result consisted of two new films, created by the act of cutting and shaping a film ("Idaho") about a film ("Chimes") about a couple of plays ("Henry IV"). It’s an artistic genealogy, but at the same time we each bring something from outside and from ourselves to the relationship. As Shakespeare used British history for his material, Orson Welles used Shakespeare. Van Sant used Welles, and Shakespeare, and his own experiences to create his film. In turn, I humbly used Van Sant and Phoenix to reveal how much I love them.

From the book "LIVING WITH SHAKESPEARE: Essays by Writers, Actors and Directors." “My Own Private River” copyright © 2013 by James Franco. Introduction and compilation copyright © 2013 by Susannah Carson. Forward copyright © 2013 by Harold Bloom. All rights reserved. Reprinted with the permission of Vintage Books, an imprint of the Knopf Doubleday Publishing Group, a division of Random House, Inc.