The woman who wrecked Great Britain

Margaret Thatcher earned every single cheer that greeted her death 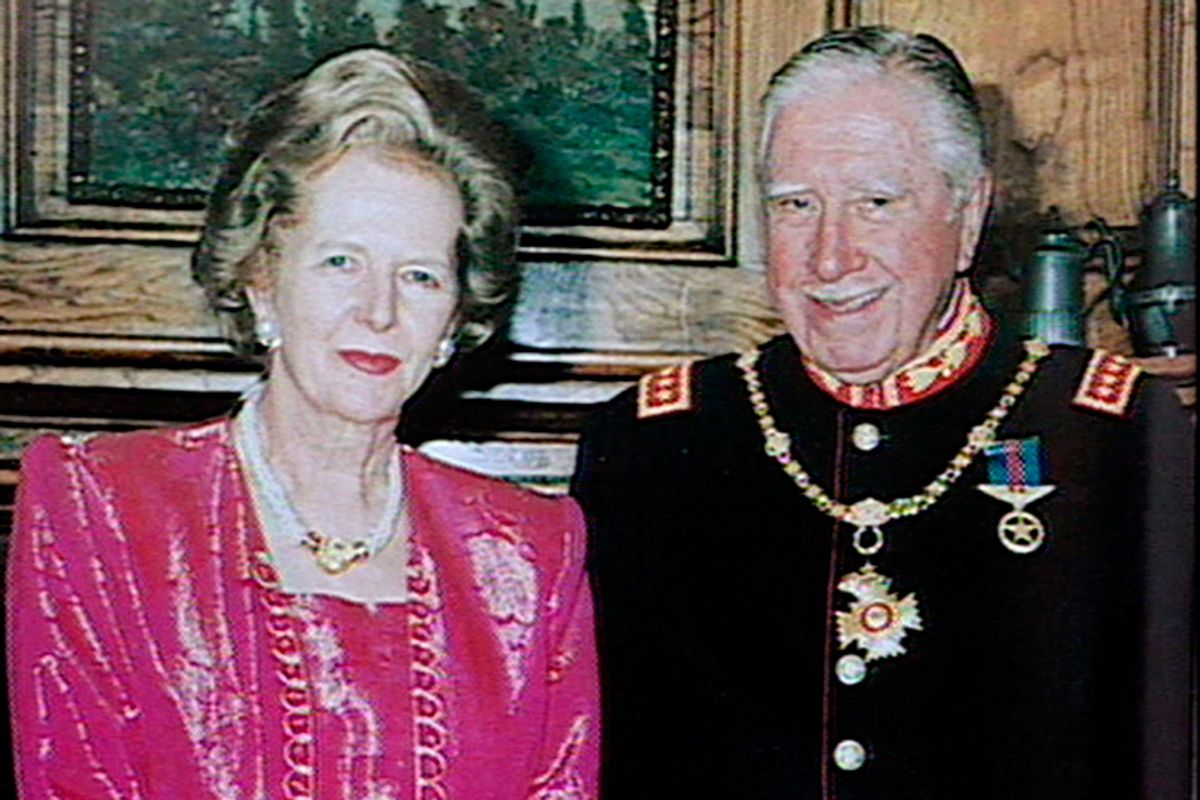 Margaret Thatcher and Augusto Pinochet in March, 1994, during a private meeting in Santiago. (Reuters)
--

Aging punk rockers, trade-unionists and decent people around the world greeted the news of the passing of Margaret Thatcher, Baroness Thatcher, with something less than respectful restraint. Millions of people had been looking forward to yesterday for years

Despite their quaint maintenance of a monarchy, British politics are less respectful than ours, and the prime minister is afforded much less regal deference than our president -- though by the end of her reign Thatcher was always using the royal "we" -- so the death of Thatcher has and will be debated in the United Kingdom much more critically than the death of her comrade-in-arms against the postwar liberal consensus Ronald Reagan was in the United States. The more cowardly American press, though, calls her time in office "controversial" and then moves on to the much more comfortable territory of her extraordinary ambition, forceful personality and skill with a cutting remark. (Our weird class of privileged British expat media leeches have also guided the discussion of the Iron Lady along those lines.)

It would be a crime to allow hagiography and personality to distract from what made her so deeply despised: She ruined Britain.

Let's skip the rise-to-power biographical crap -- if you care you can see it in the Meryl Streep movie, I assume -- and get to the point. She intentionally immiserated millions of English, Scottish, Welsh and Irish people in order to carry out a liberalization of the British economy that benefited the wealthy at the expense of nearly everyone else. Decades after she left office, the country hasn't recovered.

Julian Barnes, in a 1993 New Yorker piece on Thatcher's self-aggrandizing autobiography, wrote that Thatcher's opponents made two "fundamental miscalculations." The first was to consider her a "weirdo," instead of an embodiment of a certain "politically disregarded form of Englishness."*

The second miscalculation was the assumption, made until quite late in the day, that what she was doing to the country could, and would, eventually be undone. This had always more or less happened in postwar politics: little pendulum swings to the left and then to the right along the years. Now, post-Thatcher, the pendulum continues to swing, but inside a clock that has been rehung on the wall at a completely different angle.

This has turned out to be entirely the case, from the subsequent era of rule by New Labour, through the current post-recession austerity experiment.

In the U.K., unlike the U.S., the ruling party is essentially free to carry out its policy agenda, and so they can take all the blame when the result is disastrous. Thatcherism wasn't a total disaster, if you were, say, a banker. For the rest of Britain, it was obviously a pretty bad deal. As this chart from the Guardian shows, poverty skyrocketed during the Thatcher era -- no surprise there, considering the intentional recessions and massive deindustrialization that made up her economic agenda -- and never went back down, even as unemployment finally fell to pre-Thatcher levels during the most recent boom.

At the same time, Britain became much less equal.

As the trade unions were broken "The City" -- London's Wall Street -- experienced the deregulation and subsequent astronomic growth that would eventually lead to Libor-rigging and, paired with similar deregulatory efforts in the States, the spectacular international financial catastrophe itself.

Britain no longer "makes" much of anything, and when those lost jobs were replaced, they were replaced with low-wage, no-security service industry work. Thatcherites insist, still, that Thatcher did what had to be done, that globalization would've devastated hidebound, union-choked Britain regardless, and that Thatcher "rescued" the country from inflation and a general 1970s feeling that the 1970s kinda sucked. Germany and France, luckily, never had Thatchers of their own to "rescue" them. (The myth -- and it is a myth -- that the 1970s were Britain's lowest point persists mainly because "winners" of Thatcher's upward wealth redistribution are more likely to write books and newspapers columns and host television shows than former miners are.)

She created today's housing crisis. She created the banking crisis. And she created the benefits crisis. It was her government that started putting people on incapacity benefit rather than register them as unemployed because the Britain she inherited was broadly full employment. She decided when she wrote off our manufacturing industry that she could live with two or three million unemployed, and the benefits bill, the legacy of that, we are struggling with today. In actual fact, every real problem we face today is the legacy of the fact that she was fundamentally wrong.

It is commonly assumed that Thatcher put now jobless miners and other victims of her policies on "Incapacity Benefit" -- their version of "disability" benefits -- instead of counting them as unemployed, to make the widespread economic devastation she was wreaking look less appalling at election time. This would've been especially necessary considering that the Conservatives won thanks in part to their famous "Labour Isn't Working" campaign, and then they immediately chucked the longtime British policy of full employment.

As with Nixon, every year seems to bring new revelations of the viciousness of her government. In 1981 Thatcher advisers recommended evacuating Liverpool and leaving it to "managed decline." She was aware of and complicit in the police coverup of their role in the Hillisborough stadium disaster. At one point Thatcher suggested solving the Northern Ireland problem with "relocation" of all the Catholics, or "the Cromwell solution."

She and her government passed the original "don't say gay" bill, a proposal called Section 28 that forbid local government councils from doing anything that would "promote" homosexuality. This prompted actor Ian McKellen to come out as gay. As he said in 1988:

Many Tories were appalled by Section 28 right up to one whip who described it as red meat thrown to the wolves in the party. I'm prepared to believe the ex-member of her cabinet who tells me that Mrs. Thatcher has no objection to individual homosexuals and employs quite a few of them.

What she cannot stand is groups of homosexuals. By the same token she doesn't mind trade -unionists, it's just that she doesn't like them joining trade-unions. You can't have homosexuality on the rates anymore. She is privatising homosexuality. Well I for one intend to take out shares.

Working class communities were devastated in Britain because of her policies.

Her role in international affairs was equally belligerent whether in support of the Chilean dictator Pinochet, her opposition to sanctions against apartheid South Africa; and her support for the Khmer Rouge.

Pinochet was an annual visitor to her home in London after he stepped down from power in 1990, always sending flowers and chocolates on his arrival in England.

Days before his arrest he was invited for tea at the former premier's home.

When Pinochet escaped extradition to Spain for human rights abuses, Thatcher sent him a congratulatory commemorative plate. Pinochet's military dictatorship killed between 3,000 and 15,000 people and tortured tens of thousands more. "Your return to Chile has ensured that Spain's attempts to impose judicial colonialism have been firmly rebuffed," Thatcher wrote in a personal note enclosed with the plate.

Here's Thatcher answering questions about her government's material support for the Khmer Rouge on "Blue Peter," a children's show:

Thatcher's SAS trained and armed the genocidal (but anti- Soviet) Khmer Rouge for years. And, yes, she called Nelson Mandela a terrorist. And there was her pointless war in the Falklands, in which hundreds of people died so that the British Empire could prove to itself that it could still win pointless wars.

Margaret Thatcher was a zealot, a friend to the worst mass murderers of the 1980s, a force for antisocial cruelty, and her violent means of ending the great British experiment in social democracy made the country a more brutal, less equal county. One of the most telling, and disturbing, of Thatcher's catchphrases was "there is no alternative," which was always invoked specifically to close off the possibility of considering the many extant alternatives to her top-down class warfare. At this point, the alternatives that might've produced a more equitable future are indeed long since gone, and the future -- for England's indebted, jobless youth and people the world over ground down by her philosophical comrades -- looks about as grim as those horrid 1970s must've looked to the people who originally voted Thatcher into office. The world is better off without her, and it would've been much better off had she never existed in the first place.

*(Also see this piece for some vintage creepy Thatcher fetishizing by old Tory sots like Kingsley Amis and Philip Larkin. For all the sexist language that Thatcher's opponents wielded against her over the years, her treatment by a certain class of older British male admirer is its own kind of gross.)