Anthony Weiner is mulling a run for mayor

"It's now or maybe never for me," the former congressman says in a new profile 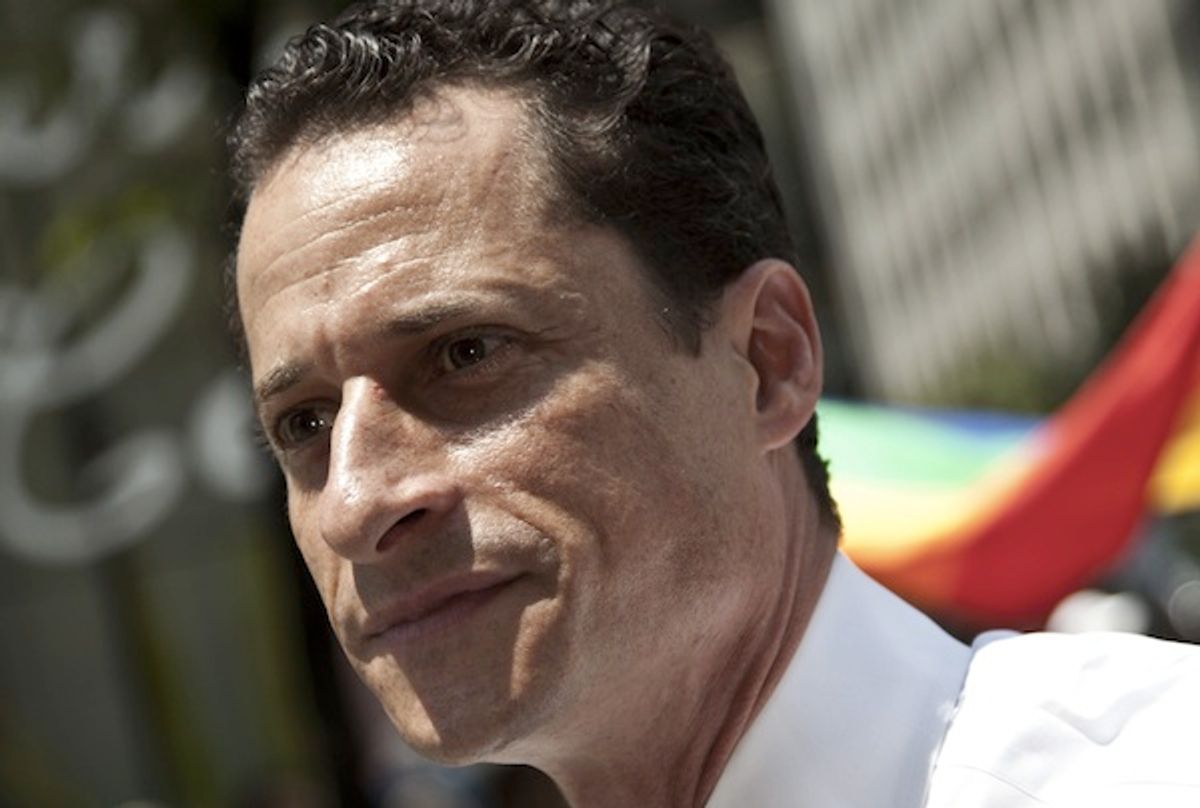 The New York Times Magazine has a big profile out Wednesday of former Rep. Anthony Weiner and his wife, Hillary Clinton's deputy chief of staff Huma Abedin, in which Weiner says he is considering a political comeback, possibly as soon as this year for New York City's mayoral race.

Weiner, who resigned from the House in 2011 after he accidentally tweeted a lewd picture of himself and then lied to the press about it, told the Times that he has spent $100,000 in polling and research for a possible run in 2013. “I don’t have this burning, overriding desire to go out and run for office,” he said. “It’s not the single animating force in my life as it was for quite some time. But I do recognize, to some degree, it’s now or maybe never for me, in terms of running for something."

“Also, I want to ask people to give me a second chance," he continued. "I do want to have that conversation with people whom I let down and with people who put their faith in me and who wanted to support me. I think to some degree I do want to say to them, ‘Give me another chance.’”

More key quotes from the piece:

Weiner on Abedin's reaction to the scandal:

“I have a choppy memory of it, but she was devastated. She immediately said, ‘Well you’ve got to stop lying to everyone else too.’ And basically we drove back to the city, and she said: ‘You’ve just got to tell everyone the truth. Telling me doesn’t help any.’ It was brutal. It was completely out of control. There was the crime, there was the cover-up, there was harm I had done to her. And there’s no one who deserved this less than Huma."

Jon Stewart, a longtime friend of Weiner's, on whether the scandal surprised him:

“It did, in that you never expect the person you know to be the guy on TV in the middle of the quagmire, but it didn’t surprise me in that we’re all human. So it’s not like, ‘My God, I can’t believe the depravity!’ First of all, in terms of these types of scandals, the depravity was on a very low scale.”

Weiner, on why he thinks the media frenzy surrounding the scandal got so big:

"Huma didn’t really want me to, frankly. But I just had to cull that part of the conversation out of our lives and focus on my marriage, my family, her family. I just didn’t have any bandwidth. My career seemed the least important of all of those other things. That wasn’t easy for Huma. Her frame was: We’ve gotta get back to normal somehow.”

“You know, like spin the wheel! Find someone to say something to you! And if it wasn’t 2011 and it didn’t exist, it’s not like I would have gone out cruising bars or something like that. It was just something that technology made possible and it became possible for me to do stupid things. I mean, the thing I did, and the damage that I did, not only hadn’t it been done before, but it wasn’t possible to do it before.”