From cars to consumer goods, there's almost nothing the currency can't buy 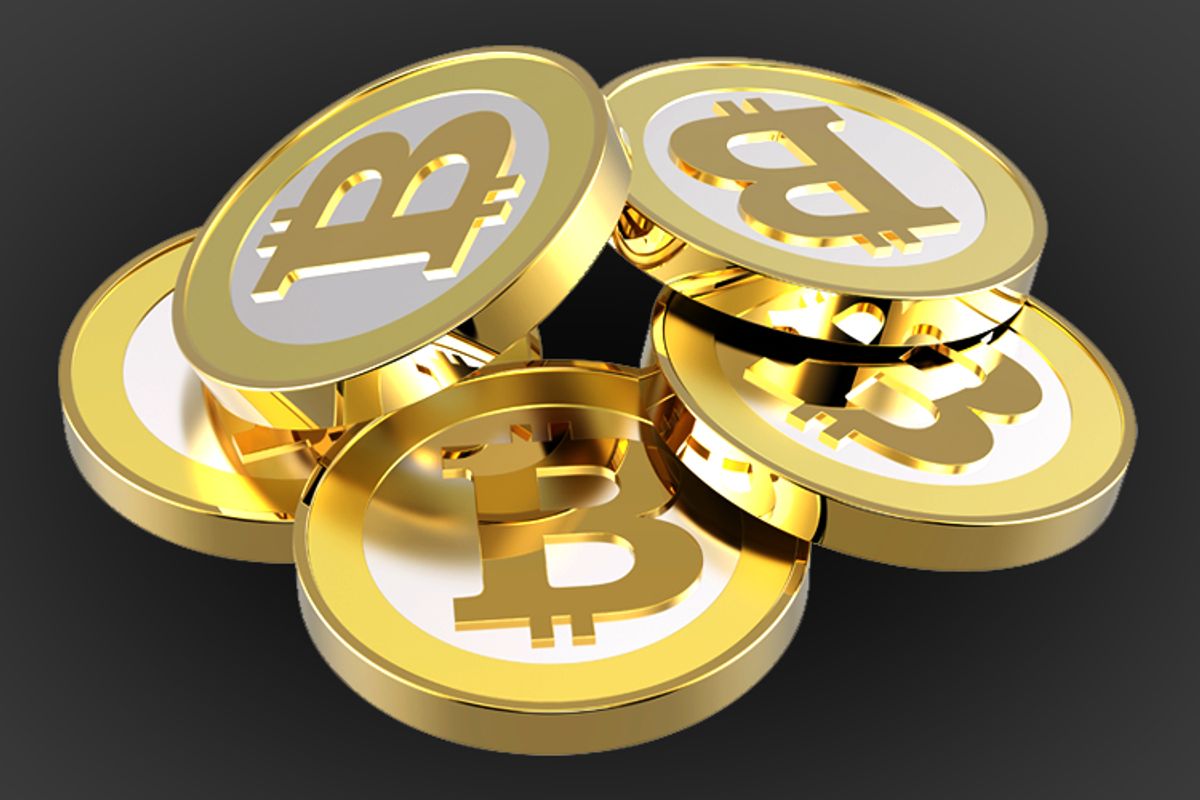 LONDON (AP) -- With $600 stuffed in one pocket and a smartphone tucked in the other, Patricio Fink struck a deal that's joining thousands like it in a virtual revolution.

The Argentine software developer was dealing in bitcoins - getting an injection of the cybercurrency in exchange for a wad of real greenbacks he handed to a pair of Australian tourists in a Buenos Aires Starbucks. Fink wanted to add to his electronic wallet. The visitors wanted spending money at black market rates without the risk of getting roughed up in one of the Argentine capital's black market exchanges.

In the safety of the coffee shop, the tourists transferred Fink their bitcoins through an app on their smartphone and walked away with the cash.

"It's something that is new," said Fink, 24, who described the deal to The Associated Press over Skype. "And it's working."

It's transactions like these - up to 70,000 of them each day over the past month - that have propelled bitcoins from the world of Internet oddities to the cusp of mainstream use, a remarkable breakthrough for a currency which made its online debut only four years ago. When they first began pinging across the Internet, bitcoins could buy you almost nothing. Now, there's almost nothing bitcoins can't buy. From hard drugs to hard currency, songs to survival gear, cars to consumer goods, retailers are rushing to welcome the virtual currency whose unofficial symbol is a dollar-like, double-barred B.

Advocates describe Bitcoin as the foundation stone of a Utopian economy: no borders, no change fees, no closing hours, and no one to tell you what you can and can't do with your money. The total value of bitcoins now topping $2 billion from a tiny fraction of that just last year, critics say it's a bubble waiting to burst.

Amid all the hype, Bitcoin's origins are a question mark.

The mechanics of the virtual currency were first outlined in a research paper signed Satoshi Nakamoto - likely a pseudonym - and the coins made their online debut in 2009. How coins are created, how transactions are authenticated and how the whole system manages to power forward with no central bank, no financial regulator and a user base of wily hackers all comes down computing power and savoir faire. Or, as Nicholas Colas, chief market strategist for the ConvergEx Group, describes it: "genius on so many levels."

The lynchpin of the system is a network of "miners" - high-end computer users who supply the Bitcoin network with processing power needed to maintain a transparent, running tally of all transactions. The tally is one of the most important ways in which the system prevents fraud, and the miners are rewarded for supporting the system with an occasional helping of brand-new bitcoins.

Those bitcoins have become a white hot commodity in the past few days.

Rising from roughly $13 at the beginning of the year, the price of a single bitcoin blasted through the $100 barrier last week, according to Mt. Gox, a site where users can swap bitcoins for more traditional currencies. On Tuesday, the price of a single bitcoin had topped $200. On Wednesday, it hit $266 before a "flash crash" took it down to half that. The value then climbed back to just below $200.

Some say the banking crisis in Cyprus helped spur interest in the cybercurrency as depositors looked for creative ways to move money. Fink, the Argentine, favors bitcoins because he believes they will insulate him from his country's high inflation. Others - from Iranian musicians to American auto dealers - use the currency to dodge international sanctions or reach new markets.

But the anything-goes nature of Bitcoin has also made it attractive to denizens of the Internet's dark side.

One of the most prominent destinations for bitcoins remains Silk Road, a black market website where drug dealers advertise their wares in a consumer-friendly atmosphere redolent of Amazon or eBay - complete with a shopping cart icon, a five-point rating system and voluminous user reviews. The site uses Tor, an online anonymity network, to mask the location of its servers, while bitcoin payments ensure there's no paper trail.

One British user told AP he first got interested in Silk Road while he was working in China, where he used the site to order banned books. After moving to Japan, he turned to the site for the occasional high.

"Buying recreational drugs in Japan is difficult, especially if you don't know people from growing up there," said the user, who asked for anonymity because he did not his connection to Silk Road to be publicly known.

He warned that one of the site's drawbacks was that the drugs can take weeks to arrive "so there's no spontaneity."

Drug dealers aren't the only ones cashing in on Bitcoin. The hackers behind Lulz Security, whose campaign of online havoc drew worldwide attention back in 2011, received thousands of dollars' worth of bitcoins after promising followers that the money would go towards launching attacks against the FBI.

A report apparently drawn up by the bureau and leaked to the Internet last year said that "since Bitcoin does not have a centralized authority, detecting suspicious activity, identifying users and obtaining transaction records is problematic for law enforcement."

It went on to warn that bitcoins might become "an increasingly useful tool for various illegal activities beyond the cyber realm" - including child pornography, trafficking, and terrorism.

The FBI did not immediately respond to an email seeking comment.

Late last month the U.S. Treasury's Financial Crimes Enforcement Network, or FinCen, announced it was extending its money laundering rules to U.S. bitcoin dealers and transfer services, meaning that companies that trade in the cybercurrency would have to keep more detailed records and report high-value transactions.

Many in the Bitcoin community are frustrated at the attention paid to the shadier side of the virtual economy.

Atlanta-based entrepreneur Anthony Gallippi said the focus on drugs and hacking misses the "much bigger e-commerce use for this that's growing and that's growing rapidly."

Very few businesses set their prices in bitcoins, but an increasing number are accepting it for payment. Gallippi's company, BitPay, handles Bitcoin transactions for some 4,500 company, taking payments in bitcoins and forwarding the cash equivalent to the vendor involved, which means that his clients are insulated from the cybercurrency's volatility.

He said many of the businesses are e-commerce websites, but he said an increasing number of traditional retailers were looking to get into the game as well.

"We just had an auto dealership in Kansas city apply," he said.

In March BitPay said its vendors had done a record $5.2 million in bitcoin sales - well ahead of the $1.2 million's worth of monthly revenue estimated to have coursed through Silk Road last year.

Even artists accept bitcoins. Tehran-based music producer Mohammad Rafigh said the currency had allowed him to sell his albums "all over the world and not only in Iran."

Gallippi said the cybercurrency's ease of access was its biggest selling point.

With Bitcoin, "I can access my money from any computing device at any time and do whatever the heck I want with it," he said.

Many Wall Street veterans are skeptical - seeing Bitcoin as just the latest overvalued asset overdue for an ugly fall.

"It is rare that we get to see a bubble-like phenomenon trade tick for tick in real time," he said in a note to clients last week.

But bitcoins are still generating buzz.

Colas, the ConvergEx strategist, said he'd been overwhelmed by calls from venture capitalists and private equity managers asking about Bitcoin.

One Bitcoin supporter with a unique perspective on the boom might be Mike Caldwell, a 35-year-old software engineer based in suburban Utah. Caldwell is unusual insofar as he mints physical versions of bitcoins at his residence, cranking out thousands of homemade tokens with codes protected by tamper-proof holographic seals - a retro-futuristic kind of prepaid cash.

Caldwell acknowledges that the physical coins were intended as novelty items, minted for the benefit of people "who had a hard time grasping a virtual coin."

But that hasn't held back business. Caldwell said he'd minted between 16,000 and 17,000 coins in the year and a half that he's been in business. Demand is so intense he recently announced he was accepting clients by invitation only.

Some may wonder whether Caldwell's coins will one day be among the few physical reminders of an expensive fad that evaporated into the electronic ether - perhaps the result of a breakdown in its electronic architecture, or maybe after a crackdown by government regulators.

When asked, Caldwell acknowledged that bitcoin might be in for a bumpy ride. But he drew the analogy between the peer-to-peer currency enthusiasts who hope to shake the finance world in the 2010s with the generation of peer-to-peer movie swappers who challenged the entertainment industry's business model in the 2000s.