Israel may be operating in Syria 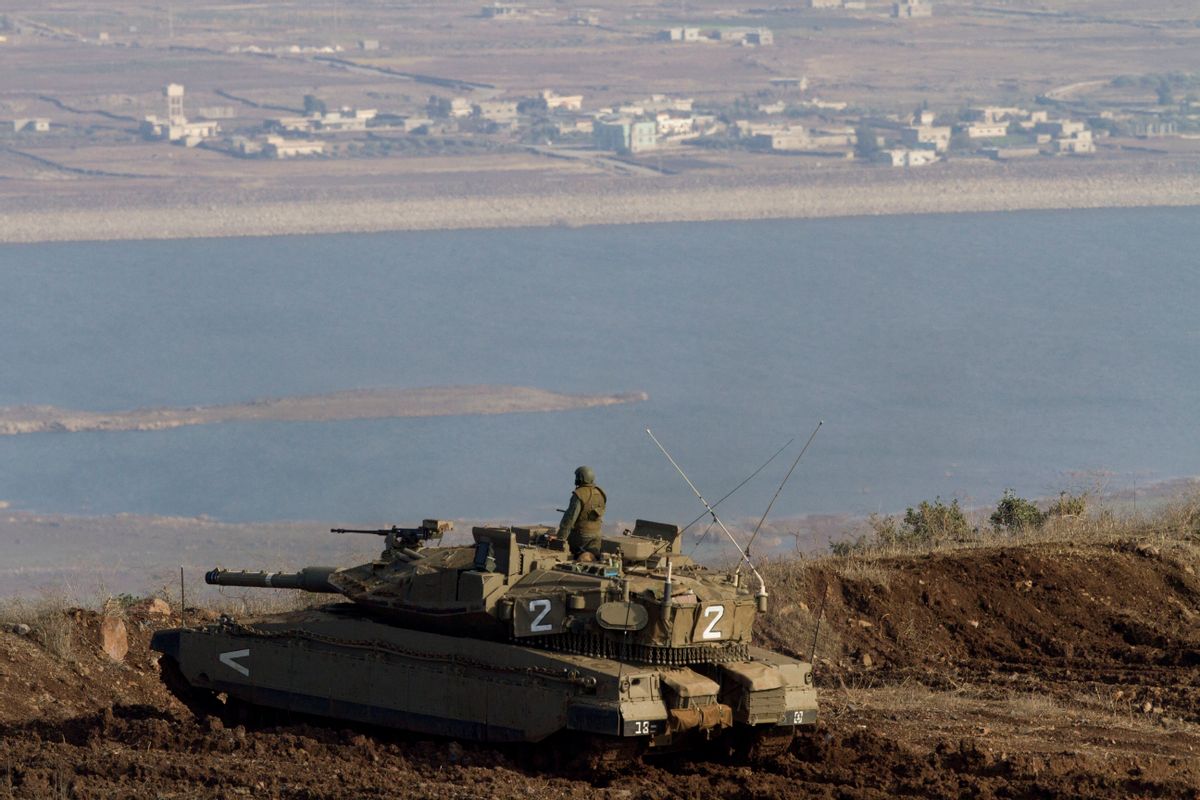 GOLAN HEIGHTS — Israeli military personnel are operating in non-combat capacity in an area across Israel's border with Syria, GlobalPost has learned.

This area may be in Syrian territory that,with the redeployment of regular Syrian army units to Damascus, has become a contested arena for various rebel groups.

Israel and Syria have been in a formal state of war since the founding of the State of Israel in 1948. There are no diplomatic ties and no contacts, except through UN offices; it is illegal for Israelis to enter Syria, and Syrians entering Israel are considered enemy infiltrators.

UN peacekeeping forces have safeguarded a demilitarized zone along the generally quiet border since the end of the Yom Kippur War in 1973. The last Israeli soldiers known to have been in Syria were returned to Israel in an exchange of POWs following the war.

Reports that Israelis may be operating, even in non-combat capacities, in an enemy state can be compared to information indicating that American military personnel are operating in North Korea — if North Korea lay on the American border, and if it was consumed by a civil war in which extremist elements were involved.

Yet it appears that Israeli security forces have entered Syrian territory to identify wounded Syrians and administer basic medical care across the border.
A senior Israeli source told GlobalPost that wounded Syrian rebels who have received medical care in Israel "are transported across the border only once they are positively identified and receive initial emergency medical treatment while still on the other side," meaning on Syrian soil.

This indicates a much higher level of activity by Israel in rebel-held lands than has previously been acknowledged. It also is a sign that Israel is willing to put some of its own personnel in significant peril in order to retain some semblance of order at the national boundary line.

Late last month, after 11 Syrian citizens were treated in Israeli hospitals, AFP reported that the Israeli army set up a field hospital on the Israeli-Syrian border to provide emergency care on-site. The army spokesman has refused to comment on the report.

Standing on the northern Golan Heights, a white tent-like structure is visible within Israeli lines, on the grounds of military base 105.

"I think behind the scenes there are steps being taken to prepare. We haven't set up a field hospital for thousands. But there is some preparation, more ambulances, more doctors, more medical equipment. We're ready. It's only logical," Ret. Col. Eshkol Shokron, who commanded the Golan Division until his retirement last August, told GlobalPost.

"It’s a terrible situation there. Injured people are dying in the field because of a lack of medical treatment. Sometimes they just bleed. If possible, caring for them on the border without bringing them into Israel is better. I think the army is doing things in the field."

When asked by GlobalPost if non-combat military personnel are operating across the Syrian border, Israeli Defense Forces spokesman, Capt. Eytan Buchman, did not deny the possibility.

In a written statement, he replied, "The IDF places a great deal of importance on the provision of humanitarian care when necessary. As such, we have provided initial medical assistance to a number of Syrians over the past few months. We cannot at this time comment on the process that takes place during such incidents. The IDF's primary goal is to provide for the safety and security of the State of Israel and its residents."

Whether there is an established base of medical operations on the border itself, or whether Israelis are operating just across the frontier, "the State of Israel doesn't need to take sides in the war," Shokron said.

He added that there is reluctance in Israel to address the matter head on because of concerns that wounded Syrians, both civilians and combatants, could flood the Israeli border.

"If we advertise that there's a hospital here, the whole world will come. If they understand there's an option here, and no one will shoot at them, that the army is moral and will take care of them, of course it is their best option."

Ret. Brig. Gen. Shlomo Brom, an expert on Israeli military strategy, says the significance of any Israeli presence across the Syrian lines would be tactical, not strategic, and that he doubts there exists a "permanent Israeli presence" across the border.

"It may mean there are ties or communication developing with some of the saner, more secular rebel groups," he said. "Dialogue like this is essential to cope with new security demands. Israelis may go in and out as the situation demands. But I'd say its farfetched to believe that any Israelis are sitting there in a permanent capacity."

Brom draws a line between necessary border vigilance and Israeli incursions into Syria "when our own security is involved," such as in the case of an Israeli air force strike against a convoy carrying weapons from Syria to Lebanon two months ago.

"It’s the type of situation where everything is falling apart on the eastern side of our border, like on our border with Sinai," said IDF spokesman Col. Peter Lerner. "It is becoming a no man's land and a breeding ground for extremist Islamic organizations like Al Qaeda and the likes of them."

The Iraqi wing of al Qaeda has claimed that a rebel group active in the Syrian rebellion is its affiliate.

When asked about widespread reports that Israeli drones have flown over Syria, Lerner declined to comment.

About 20 wounded Syrians have so far been treated in several hospitals in Israel's north. Dr. Hany Bahouth, the director of Acute Care Surgery at Haifa's Rambam Hospital, told GlobalPost of a case in which one injured Syrian arrived at his hospital after having already been operated on in another unidentified Israeli medical facility.

"A severely wounded patient came to us after having been operated on elsewhere," Bahouth said, adding that his surgical records were written down in Hebrew, on unmarked pages. "The patient arrived with gunshot injuries to the stomach and left chest, liver and diaphragm injuries and also chest wall right lung injury. He arrived here to the surgical ICU two days after initial surgical interventions were performed."

The unidentified patient eventually regained consciousness and was weaned from a ventilator. He remains under 24 hour a day guard. Doctors expect to release him soon.

Asked whether he knew anything about the identity or the provenance of his patient, Bahouth replied, "I never ask. I have no idea. I'm not interested. I received the information I received and we managed his care and stabilized him. We did our job."

"In general," he said, reflecting on years of trauma care, "I've learned not really to believe what patients with gunshot wounds or the victims of knifings tell you. They always have something to hide. So I don't ask."