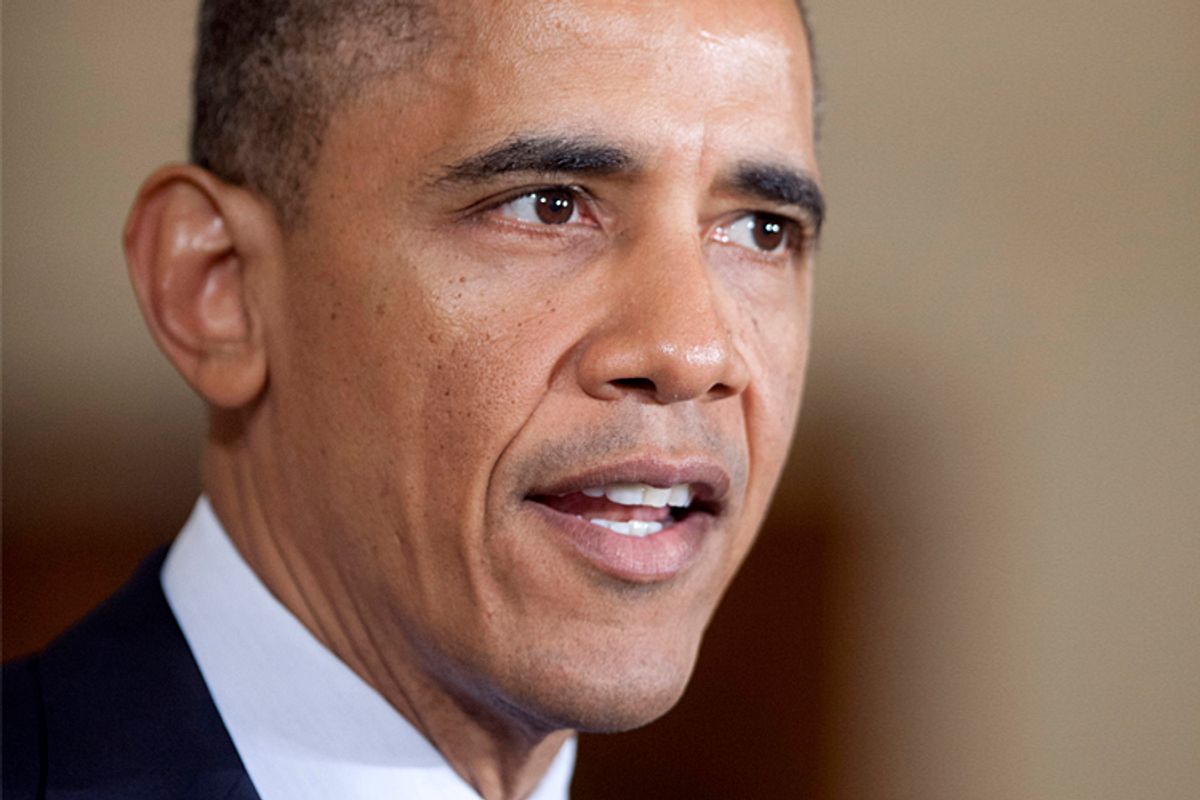 WASHINGTON (AP) — President Barack Obama is sending Congress a $3.77 trillion spending blueprint that seeks to achieve an elusive "grand bargain" to tame runaway deficits by raising taxes further on the wealthy and trimming popular benefit programs such as Social Security.

The president's proposal being unveiled Wednesday includes an additional $1.8 trillion in deficit reduction over the next decade, bringing total deficit savings to $4.3 trillion, based on the administration's calculations.

It projects that the deficit for the 2014 budget year, which begins Oct. 1, would fall to $744 billion. That would be the lowest gap between spending and revenue since 2008.

But instead of moving Congress nearer a grand bargain, Obama's proposals so far have managed to anger both Republicans, who are upset by higher taxes, and Democrats upset with cuts to Social Security benefits.

The president's spending and tax plan is two months late. The administration blames the delay on the lengthy "fiscal cliff" negotiations at the end of December and then fights over the March 1 automatic spending cuts.

The president's plan tracks an offer he made to House Speaker John Boehner, R-Ohio, during December's budget negotiations, which Boehner ended up walking away from because of his opposition to higher taxes on the wealthy.

The Obama budget proposal will join competing budget outlines already approved by the Republican-controlled House and the Democratic-run Senate.

Obama's plan is not all about budget cuts. It also includes an additional $50 billion to fund infrastructure investments, including $40 billion in a "Fix It First" effort to provide immediate investments to repair highways, bridges, transit systems and airports nationwide.

Obama's budget would also provide $1 billion to launch a network of 15 manufacturing innovation institutes across the country, and it earmarks funding to support high-speed rail projects.

The president also is proposing establishment of program to offer preschool to all 4-year-olds from low- and moderate-income families, with the money to support the effort coming from increased taxes on tobacco products.

The administration said its proposals to increase spending would not increase the deficit but rather are paid for either by increasing taxes or making deeper cuts to other programs.

Among the proposed cuts, the administration wants to trim defense spending by an additional $100 billion and domestic programs by an extra $100 billion over the next decade.

The budget proposes cutting $400 billion from Medicare and other health care programs over a decade. The cuts would come in a variety of ways, including negotiating better prescription drug prices and asking wealthy seniors to pay more.

It would obtain an additional $200 billion in savings by scaling back farm subsidies and trimming federal retiree programs.

The most sweeping proposal in Obama's budget is a switch in the way the government calculates the annual cost-of-living adjustments for the millions of recipients of Social Security and other government benefit programs. The current method of measuring increases in the consumer price index would be modified to track a process known as chained CPI.

The new method takes into account changes that occur when people substitute goods rising in price with less expensive products. It results in slightly lower annual reading for inflation.

The switch in the inflation formula would cut spending on government benefit programs by $130 billion over 10 years, although the administration said it planned to protect the most vulnerable, including the very elderly. The change would also raise about $100 billion in higher taxes because the current CPI formula is used to adjust tax brackets each year. A lower inflation measure would mean more money taxed at higher rates.

In the tax area, Obama would raise an additional $580 billion by restricting deductions for the top 2 percent of family incomes. The budget would also implement the "Buffett Rule" requiring that households with incomes of more than $1 million pay at least 30 percent of their income in taxes. Charitable giving would be excluded.

Congress and the administration have already secured $2.5 trillion in deficit reduction over the next 10 years through budget reductions and with the end-of-year tax increase on the rich. Obama's plan would bring that total to $4.3 trillion over 10 years.

It is unlikely that Congress will get down to serious budget negotiations until this summer, when the government once again will be confronted with the need to raise the government's borrowing limit or face the prospect of a first-ever default on U.S. debt.

As part of the administration's effort to win over Republicans, Obama will have a private dinner at the White House with about a dozen GOP senators Wednesday night. The budget is expected to be a primary topic, along with proposed legislation dealing with gun control and immigration.

Early indications are that the budget negotiations will be intense. Republicans have been adamant in their rejection of higher taxes, arguing that the $600 billion increase on top earners that was part of the late December agreement to prevent the government from going over the "fiscal cliff" were all the new revenue they will tolerate.

The administration maintains that Obama's proposal is balanced with the proper mix of spending cuts and tax increases.

Obama has presided over four straight years of annual deficits totaling more than $1 trillion, reflecting in part the lost revenue during a deep recession and the government's efforts to get the economy going again and stabilize the financial system.

The Obama budget's $1.8 trillion in new deficit cuts would take the place of the automatic $1.2 trillion in reductions required by a 2011 budget deal. That provision triggered $85 billion in automatic cuts for the current budget year, and those reductions, known as a "sequester," would not be affected by Obama's new budget.

The budget plan already passed by the GOP-controlled House would cut deficits by a total $4.6 trillion over 10 years on top of the $1.2 trillion called for in the 2011 deal. The budget outline approved by the Democratic-controlled Senate tracks more closely to the Obama proposal, although it does not include changes to the cost-of-living formula for Social Security.