He talked about urgent action on minimum wage and climate at the start of this term. A few months later: Nada 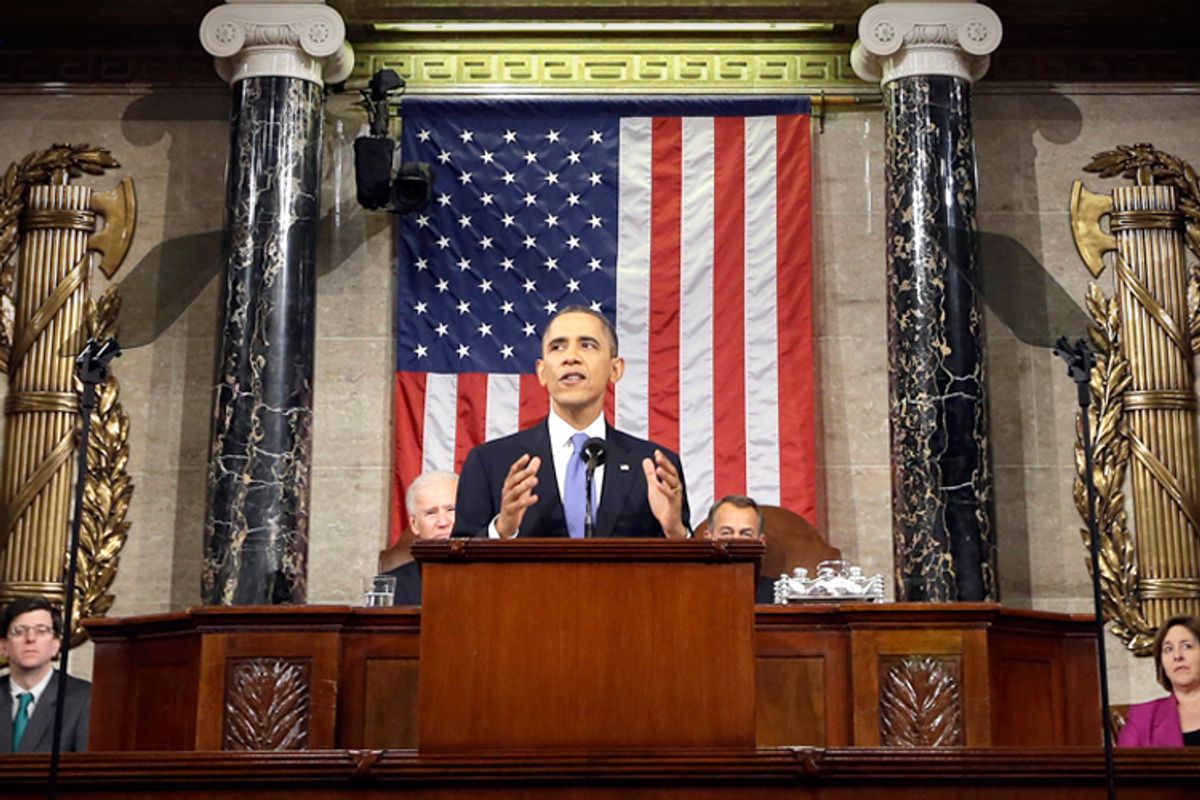 Two months ago this week, an emboldened President Obama laid out an ambitious agenda for a second term in his State of the Union address. Congress and the media have been consumed by important debates over a small array of those issues like gun control, immigration reform and the budget (which he'll unveil today). But other items critical to the progressive agenda of his second term -- especially raising the minimum wage and addressing climate change -- have largely fallen out of view.

And while it's still just a few months in, a look at these important but overshadowed goals, as he outlines his budget, does not suggest much progress -- or urgency.

“I urge this Congress to get together, pursue a bipartisan, market-based solution to climate change, like the one John McCain and Joe Lieberman worked on together a few years ago,” Obama thundered in the February speech, in an aggressive plea to address the crisis. “But if Congress won’t act soon to protect future generations, I will. I will direct my Cabinet to come up with executive actions we can take, now and in the future.”

The pronouncement came after a spate of increasingly strong language from Obama on climate, beginning at the Democratic National Convention last summer and in his inaugural address earlier this year, after several years of silence on the subject.

But some climate activists say the reality has not met the rhetoric, and that it’s hard to blame Republican opposition, because the administration can do much of what’s needed without congressional approval.

Daniel Kessler of 350.org said that while it’s too early to issue a final judgment, “his record right now is not one that inspires confidence that the president is ready to do what it takes to deal with the climate challenge and to take full advantage of the economic opportunities that transitioning to clean energy presents.”

For instance, Kessler said Obama promised to do a publicity tour across the country to raise awareness about the climate, which hasn’t happened, and to bring together scientists, activists and energy at the White House to deal with the climate crisis. “If you look at the White House visitors logs, the scientists aren’t coming, there’s been no great summit with climate scientists,” he said. Also of concern, Kessler said, is the fact that the White House announced in a “Friday news dump” that it's going to delay the release of critical new emissions rules for new coal power plants, which are due later this week. The rules are the first step to the holy grail of administrative action on climate change: rules on existing plants.

And of course activists fear the administration will approve the Keystone XL Pipeline, which rumors suggest is more likely than a flat rejection.

In the president's defense, Melinda Pierce, the deputy director of federal policy at the Sierra Club, told Salon that while she understands the frustration, the administration has been making progress -- if slowly -- toward action. “You’ve got to look at it in the context of what’s been going on in the past two months to kind of set your measuring stick, because I think there are a couple of big reasons why we haven’t seen a bold five-point agenda tumble out,” she said. Sequestration has been particularly damaging, draining funds necessary for funding green energy projects and distracting the White House.

Pierce said Obama’s budget, details of which will be released today, will show strong prioritization for green energy and climate preparation, including the Race to the Top proposal on energy that Obama unveiled in his State of the Union.

And while the Environmental Protection Agency may miss the deadline on some rules, they’re facing difficult institutional hurdles as they wait for a new director and other top leaders to be confirmed. “The administrative process is slow,” Pierce emphasized. “He said the words and we’re just beginning to see the rules go on the books.”

Another pledge that drew interest and accolades in the president's February address was his urgent call to raise the wage floor, which hasn’t been increased since 2007 for most workers and since the 1980s for workers who earn tips. “Working folks shouldn’t have to wait year after year for the minimum wage to go up while CEO pay has never been higher,” Obama said, seeming to suggest he would work to change the policy sometime in 2013.

But Congress has no plans to vote on raising the minimum wage any time soon, and advocates inside and outside the Capitol say a vote probably won’t come until after the 2014 election. Aaron Albright, a spokesman for Democratic Rep. George Miller, the ranking member on the House Education and the Workforce Committee who is leading the push on the minimum wage in the lower chamber, told Salon the bill is in a “legislative holding pattern” until the political winds shift, noting fierce Republican opposition.

Noting that the last minimum wage increase took 10 years to get passed, he added, “We view this as a marathon.”

Judy Conti of the National Employment Law Project told Salon the barriers are especially high because Republican opposition to a minimum wage hike has never been greater. “It’s absolute universal, uniform opposition by every Republican,” she said.

The closest any Republican has gotten to supporting an increase was Maine Sen. Susan Collins, who said she would support raising the federal level to match her home state’s -- but Maine’s minimum is only a quarter higher than the federal limit.

While advocates are glad that minimum wage was featured so prominently in the State of the Union, there is also a danger the president’s word choice and urgent tone gave false hope that something will be done in the short term -- when everyone working on it now says it will be a multiyear effort.

“Well, you could say that about anything in politics,” Albright, from Rep. Miller’s office, said, “but you have to have the argument.”

Obama will still have to wrestle with his allies on one key issue: How much should the minimum wage be raised? Liberals like Miller and Sen. Tom Harkin, who is guiding the effort in the Senate, want to raise it to $10.10 per hour, while Obama called for raising it to just $9. Both sides then want to index the minimum wage to inflation, so it will rise to keep up with costs.

Kelly Ross, the deputy policy director of the AFL-CIO, told Salon that he was willing to cut Obama a little slack on timing, given the demands he faces. "But we wish he would have proposed something higher than $9.”

The White House did not respond to a request for comment.