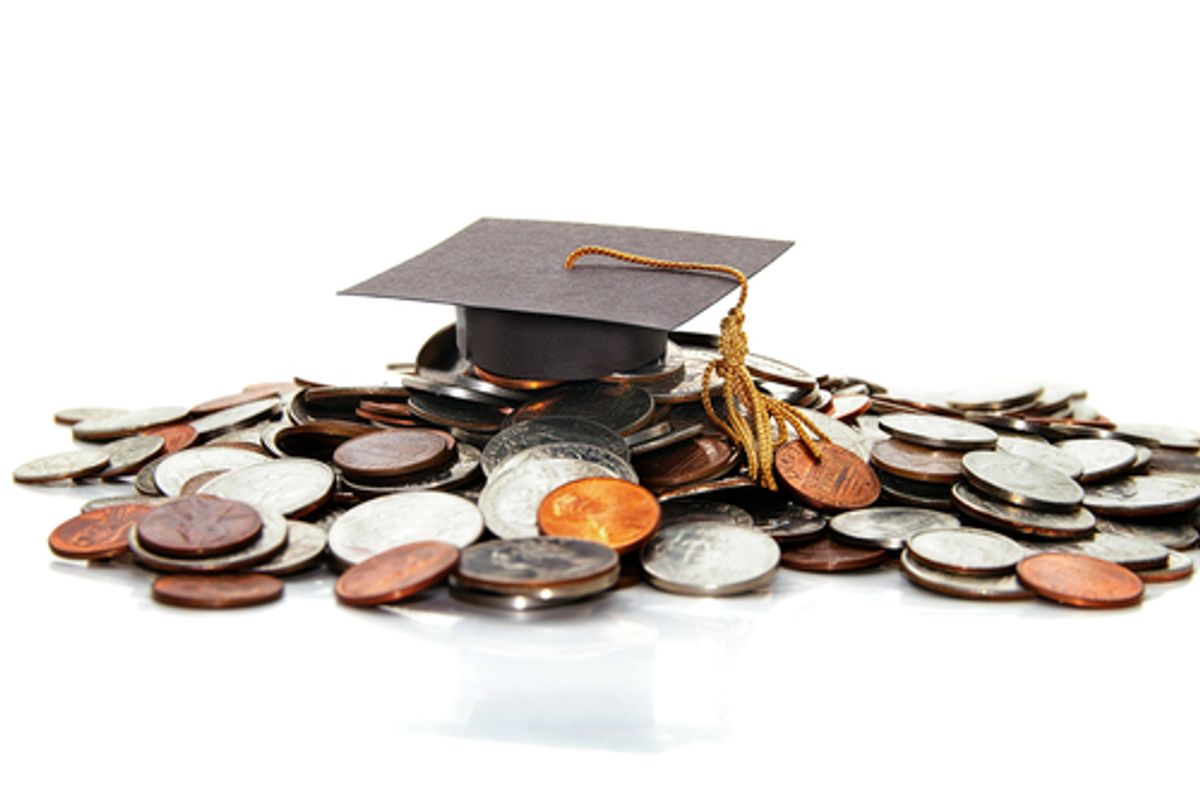 Despite the havoc a generation of heavily indebted young people promises to wreak on the economy, commentators on the student debt crisis have for some time pointed out that the federal government has considerable interest in student borrowers remaining in the red. New figures further back this up. As the Huffington Post reported Tuesday, the Education Department is expected to earn $33.5 billion off student loans made during the 2013 fiscal year, according to budget documents. "The agency’s Direct Loan program delivered a $24 billion profit on loans made in 2012, and nearly $27.5 billion on 2011 loans. All told, over the last five fiscal years, the Education Department has generated $101.8 billion in profit from student borrowers, thanks to low borrowing costs for the government and fixed interest rates for students, budget documents show," reported HuffPo, noting, "Some student advocates have charged that the department is profiting off the backs of students."

Indeed, in an extensive and important piece for the Boston Review last year, Malcolm Harris pointed out that far from being a burden to the federal government, the ballooning national student debt is in fact a boon for government coffers, and a safe investment:

Twenty billion dollars in defaulted loans sounds like a lot of money for the government to back, but that doesn’t take into account the money defaulted debtors will pay on these loans despite defaulting. Of the $20 billion in dud loans the government guarantees, it expects to recover $22 billion from debtors. If you subtract the $3 billion the feds will pay in collection costs, they still recover around 95 percent of principal from loans that default. When you default on your mortgage, you can walk away from the house, but when you default on a student loan, you can’t give your degree back. All you can do is work and pay. There’s no escape from student debt, and the government and markets both know it.

This is, then, the real plan for the education bubble: student debtors will be forced, in one way or another, to fill it in. Not only are student loans not a burden on the federal government, they’re a good investment. In 2012 the DOW estimated its subsidy for student lending at -17 percent. In other words, the DOE “subsidies” actually represent money coming in. Including all expenses, from loses on defaults to debt collection to program administration, the DOE will pull in more than $25 billion in profit from student lending this year alone—billions more dollars than the IRS will assess in gift and estate taxes combined, and more than enough to pay NASA’s whole budget. The DOE explains the negative subsidy through a divergence between “the Government’s borrowing rate and the interest rate at which borrowers repay their loans.” After all, no one can borrow at lower rate than the U.S. Treasury, certainly not college students and their families. Bondholders aren’t the only ones who think student debtors—including defaulters—will pay back every cent they owe, with interest. The government is literally counting on it.