Would Weiner even be a good mayor?

It's the key question overlooked amid the "Will he run?" chatter and sexting mea culpas 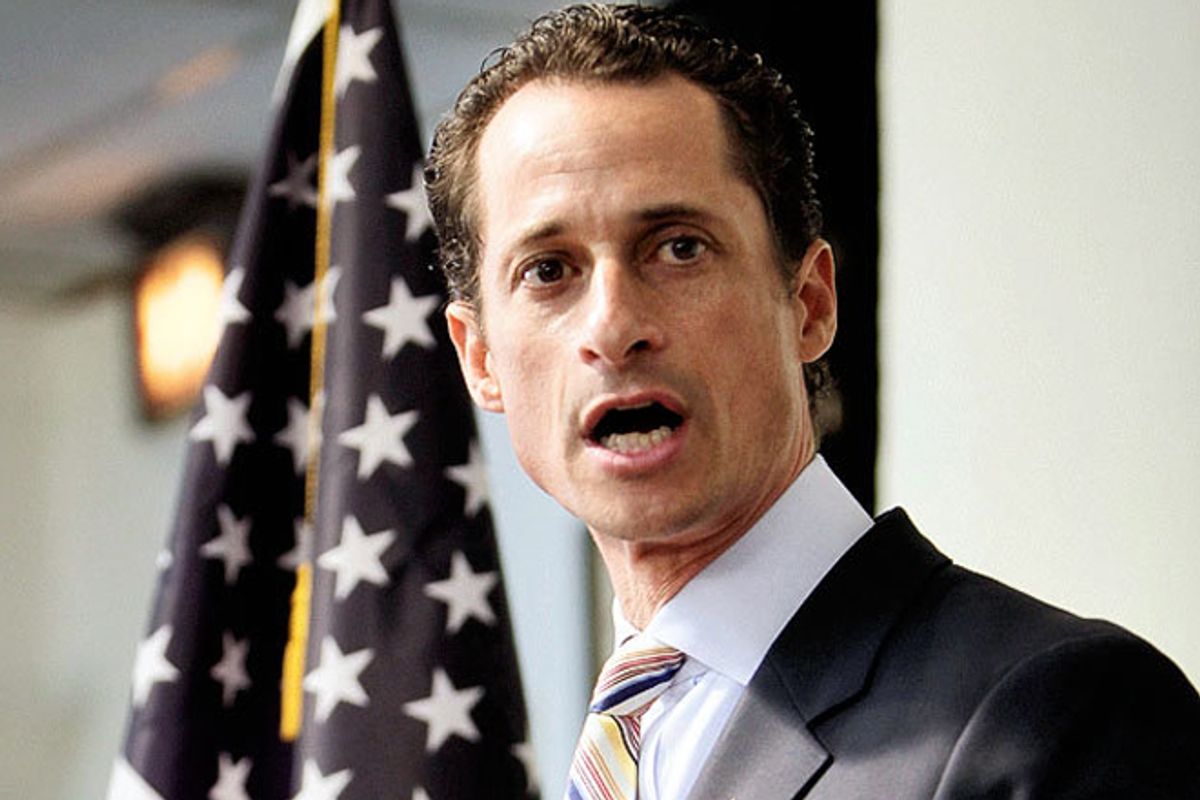 Long before Anthony Weiner was an unfortunately named joke, he was a national TV presence, high-profile member of Congress and a leading candidate for mayor of New York City. For national progressive activists frustrated with their incrementalist in the White House, and fearing an ascendant and unhinged right, Weiner’s bombastic liberalism was a salve and a rallying point -- and he relished the role of movement leader.

But now that the former congressman is hinting at a comeback, with an emotional tell-all interview in the New York Times Magazine and open talk that he's eyeing a run for mayor of New York City, can he recapture that glory on the left? And critically, was he even a good congressman to begin with? Good enough to run the nation's largest city?

Even among his Democratic compatriots, Weiner was always a bit of a divisive figure: a great communicator and powerful leader, but one who didn’t play well with others. “He operated as a lone ranger, giving a voice to the progressive movement, but not operating as a partner with a larger set of House members or progressives on the outside,” one senior strategist for an outside progressive group said, contrasting him with Sen. Elizabeth Warren, who works closely with partners to advance her agenda.

Sometimes, this became problematic. For instance, during the public option fight in the healthcare reform law, a number of groups were coordinating with each other to move forward on one message, when Anthony Weiner popped up on cable TV with a different message.

A New York Democratic strategist recalled when Weiner made an impassioned speech on the House floor slamming Republicans for opposing funding for a health bill for 9/11 first responders. The video of the speech went viral and elevated the bill to top of the news cycle, giving Democrats an effective cudgel against the GOP, but it also blew up the Democratic strategy on the legislation, which had been to try to bring Republicans into the fold.

“That’s the Yin and Yang of Anthony,” the strategist said.

There was nothing he relished more than going toe-to-toe with conservatives, as in his famous ongoing bouts of hate-flirting with Fox’s Megyn Kelly. “He love fucking with them. He knew exactly how to get under their skin. He knew all the pressure points,” the strategist said.

“There’s no one like him left on the Democratic side,” he continued. “He played the liberal bulldog on the floor, and Fox and MSNBC, and he was a guy they could reliably take some of the heat off the other people, like Pelosi.”

Be that as it may, there was no love lost between Pelosi and her unruly and outspoken caucus member. The Democratic leader was one of the first public figures to call on Weiner to resign after the sex scandal broke, and he reportedly still blames her for his demise.

“Why did Anthony Weiner resign and Charlie Rangel not have to?” a progressive activist asked rhetorically. “I think the answer was that Rangel was less of a lone operator. At Weiner’s moment of greatest need, there wasn’t necessarily a community of people who saw that he was valuable to step up and defend him.”

Of course, being mayor is very different from being a liberal movement leader in Congress. Mayors are opinionated, of course, but not necessarily ideological firebrands. Instead they're often judged on pragmatic solution-oriented decision making (think: blizzard response) rather than the kinds of politically charged incremental fights Weiner cut his teeth on in Congress.

And the former city councilman might not even be guaranteed to bring a liberal approach to the office. In fact, a move to the middle would make Weiner 3.0 -- his first bid for mayor in 2005 was that of an “outer-borough moderate in the mold of Ed Koch,” the fairly conservative former mayor of New York, as the New York Times put it at the time.

That year, when dark-horse Weiner became the main challenger to Michael Bloomberg, the New York Post wrote that the congressman was “running as the policy wonk in the field, chock-full of ideas that roll trippingly off his tongue at machine-gun pace in mind-numbingly specific detail.”

Mayors are also managers, of course, and when weighing a potential Weiner administration, critics will no doubt point to the question of how the former congressman handled his House staff. Democratic aides say privately he was a “maniac” and “nightmare” to work for. His management style was infamous enough to earn a 1,600 word A1 New York Times story. One former Marine who joined Weiner’s staff said working for the congressman was “worse than boot camp” -- according to Weiner himself.

Managing staff is an important job for any congressman, but it's less essential than it is for the city's chief executive. House offices tend to have around 25 staffers -- the City of New York has something like 250,000 employees.

The reality is, many observers downplay Weiner’s prospects in a mayor’s race, not just because of the scandal, but because he also may not have a natural base in the city, where most of the typical ethnic or geographic factions already have a candidate. Weiner commissioned a poll, but declined to share it with the Times, which does not bode well. And as Capital New York’s Josh Benson writes, Weiner still may have a substance problem (as in a lack of it).

All of this has some watchers saying Weiner might have a better chance running for comptroller, a less high-profile job where there will likely be fewer candidates. That happens to be the same office for which disgraced Gov. Eliot Spitzer was also once mentioned as a potential candidate.

"I don’t sense any real hunger among progressives in New York for Weiner to get in the race at all," a progressive strategist in New York City told Salon. "If you read the New York Times piece, he doesn’t seem like someone who’s been rehabilitated or has thought much about a policy agenda for the city, or a reason for running. Aside from promoting himself."