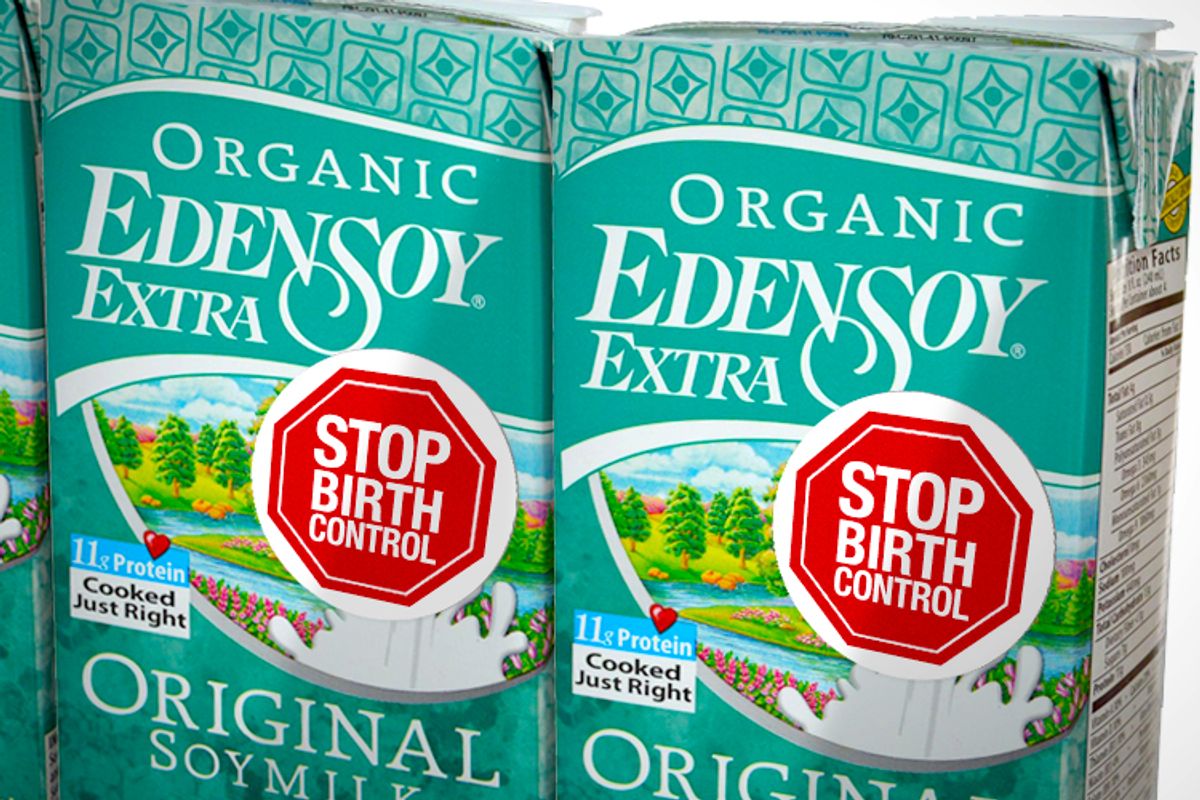 The slogan for Eden Foods, which describes itself as the "oldest natural and organic food company in North America," is "creation and maintenance of purity in food." Its CEO and founder, Michael Potter, has been prominent in debates over labeling of organic food and GMOs. But the company has been quietly seeking in court another form of purity -- to Catholic doctrine about sex being solely for procreation. That goes not just for Potter, but for all 128 of his employees.

That is, Eden Foods -- an organic food company with no shortage of liberal customers -- has quietly pursued a decidedly right-wing agenda, suing the Obama administration for exemption from the mandate to cover contraception for its employees under the Affordable Care Act. In court filings, Eden Foods, represented by the conservative Thomas More Law Center, alleges that its rights have been violated under the First Amendment, the Religious Freedom Restoration Act and the Administrative Procedure Act.

Eden Foods, which did not respond to a request for comment, says in its filing that the company believes of birth control that "these procedures almost always involve immoral and unnatural practices." The complaint also says that "Plaintiffs believe that Plan B and 'ella' can cause the death of the embryo, which is a person." (Studies show that neither Plan B nor Ella interfere with fertilization, which is the Catholic definition of the beginning of life, if not the medical one. In other words, not the death of an embryo. Also, at that stage, it's a zygote, not an embryo -- let alone a "person.") The filing also said that "Plaintiff Eden Foods’ products, methods, and accomplishments are described by critics as: tasteful, nutritious, wholesome, principled, unrivaled, nurturing, pure."

Until now, Eden Foods' conservative advocacy litigation has remained mostly under the radar, even as their marketing seems designed to appeal to liberals, from the slogan "Organic agriculture is society's brightest hope for positive change" to the '60s imagery and the use of the word "revolution" in some of its print marketing. The company's mission statement includes its goal to "contribute to peaceful evolution on earth," "to maintain a healthy, respectful, challenging, and rewarding environment for employees," and to "cultivate sound relationships with other organizations and individuals who are like minded and involved in like pursuits."

It's not the first time a company with a nebulously progressive image has actually been led by someone whose politics would horrify many of its customers. John Mackey, the CEO of Whole Foods, has publicly campaigned against the Affordable Care Act, including recently referring to it as "fascism." And  Lululemon's executive adulation for Ayn Rand became famous when the yoga products company printed bags asking, "Who is John Galt?" But while those companies have been raked over the coals, Eden Foods' efforts have largely gone unnoticed.

Eden Foods' employees are covered under Blue Cross/Blue Shield of Michigan, but until recently, Potter was able to exclude what the insurance company deemed (hilariously) “Lifestyle Drugs.” (Some rare consistency: The exclusion also included Viagra.) But once Potter became aware that the company's plan had begun to cover contraception in accordance with the Obamacare regulations, he teamed up with Thomas More Law Center to sue. The center focuses on violations of "religious freedom," including in connection with the repeal of "don't ask, don't tell." They also represented Pastor Terry Jones, who became famous for his plan to burn Qurans on the anniversary of 9/11.

They filed suit on March 20, 2013, against Secretary of Health and Human Services Kathleen Sebelius and other government parties, demanding an exemption, despite the fact that Eden Foods is a for-profit company. Two days later, District Court Judge Denise Page Hood denied an emergency motion to be exempted, writing, "Courts have held that the Mandate in question applies only to the corporate entity, not to its officers or owners, and that as to the individual owners, any burden imposed on them individually by the contraception mandate is remote[.]" She added, "The purpose of the Women’s Preventive Healthcare Regulations is not to target religion, but instead to promote public health and gender equality." A hearing has been set for May 10.

According to a scorecard compiled by the Becket Fund, another conservative legal outfit that has represented plaintiffs against the HHS mandate, there are 25 for-profit companies that have filed suit over the requirement to cover contraception in employee health plans. Seventeen of those have so far been granted temporary injunctions exempting them from the regulation. Separately, 30 nonprofit organizations, including universities with religious affiliations, have been filed, but many are in limbo as the administration clarifies who will be exempt. This week, the public comment period on revising the regulations ended, and Planned Parenthood's Cecile Richards said in a statement on the policy, "The idea that your employer could refuse to cover a prescription medication because they disagree with one of its uses — that’s unacceptable."

Many customers of Eden Foods may feel the same way about a company marketing itself to a liberal clientele and then quietly harboring a right-wing, ideological agenda.