GOP plots to rig the court 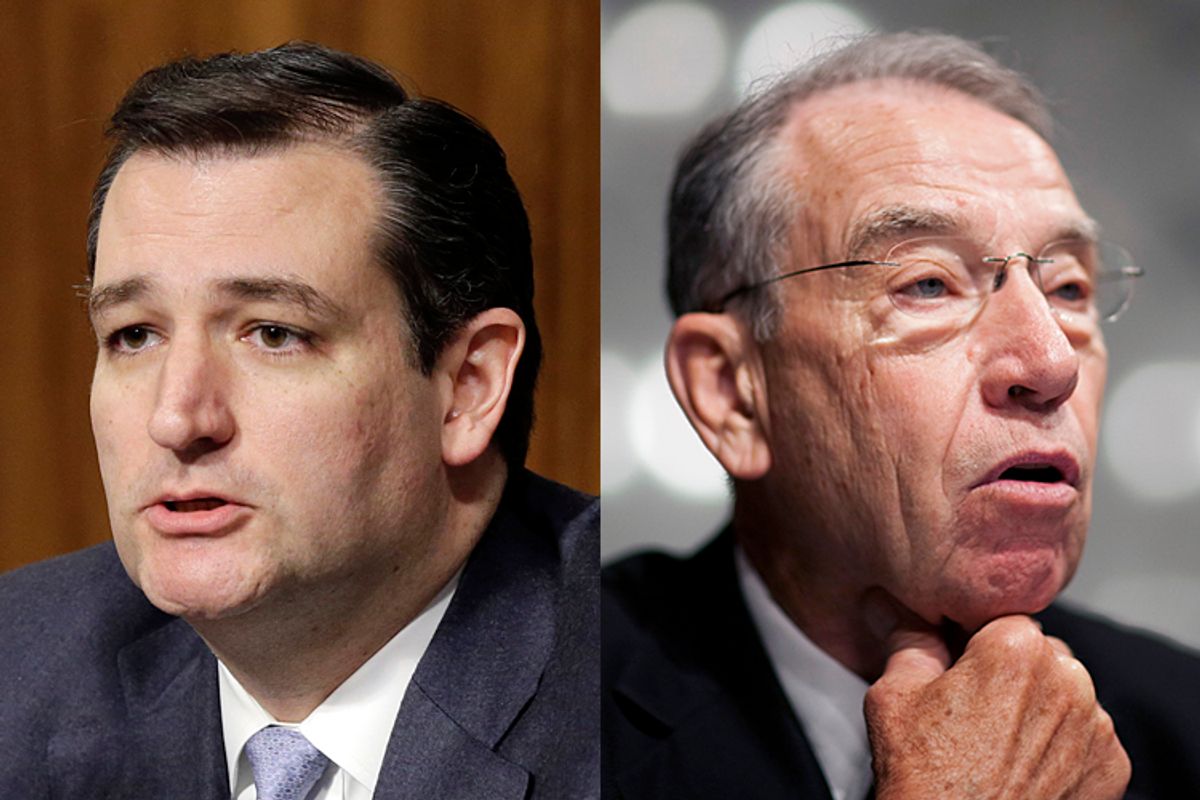 The high-water mark of FDR's power came when he tried to give himself the power to appoint six new Supreme Court justices, which opponents decried as an underhanded scheme to rig the court with justices who favored his agenda.

Now, 75 years later, Republicans are trying to do the same thing, but in reverse. Sen. Chuck Grassley, the ranking Republican on the Senate Judiciary Committee and thus the most important member of his party on such issues, introduced legislation yesterday that seems innocuous enough at first. Here's how he explained it in a hearing yesterday:

Even the name of Grassley's bill, "The Court Efficiency Act," sounds anodyne, but the bill's sponsors -- including Sens. Ted Cruz and Mike Lee, two of the most extreme Republicans on legal issues -- should give one pause.

See, for months, Republicans have been filibustering Obama's nominations to the D.C. Circuit Court of Appeals, among others. Grassley's bill would simply eliminate three of those vacancies, reducing the court from 11 to eight judges, and thus cement the existing conservative majority on the country's second most powerful court, after only the Supreme Court.

Nan Aron, the president of the Alliance for Justice, a progressive legal advocacy group, said the move is just a clever reinterpretation of FDR's "court-packing scheme." "The conservative majority on the D.C. Circuit has used its power to issue decisions undermining protections for workers, consumers, and the environment that affect all Americans. This activism is possible only because there are four vacancies on the court," Aron said.

The stated reason for Grassley's bill is to equalize the caseload between the D.C. Circuit and other courts, but Ian Millhiser, a legal expert at the Center for American Progress Action Fund, calls Grassley’s pretext "highly misleading." "Unlike other federal courts of appeal, the D.C. Circuit hears an unusually large number of major regulatory and national security cases, many of which require very specialized legal research, involve intensely long records, and take more time for a judge to process than four or five normal cases of the kinds heard in other circuit," he wrote at ThinkProgress.

While Democrats deployed the filibuster against judicial nominees under Bush, Republicans have used it far more often by any measure. The slow pace of confirmations has hollowed out the federal judiciary to such a degree that Chief Justice John Roberts warned the courts were facing a crisis and called on Republicans to advance more judges.