Wall Street Dem covers up her past and runs again 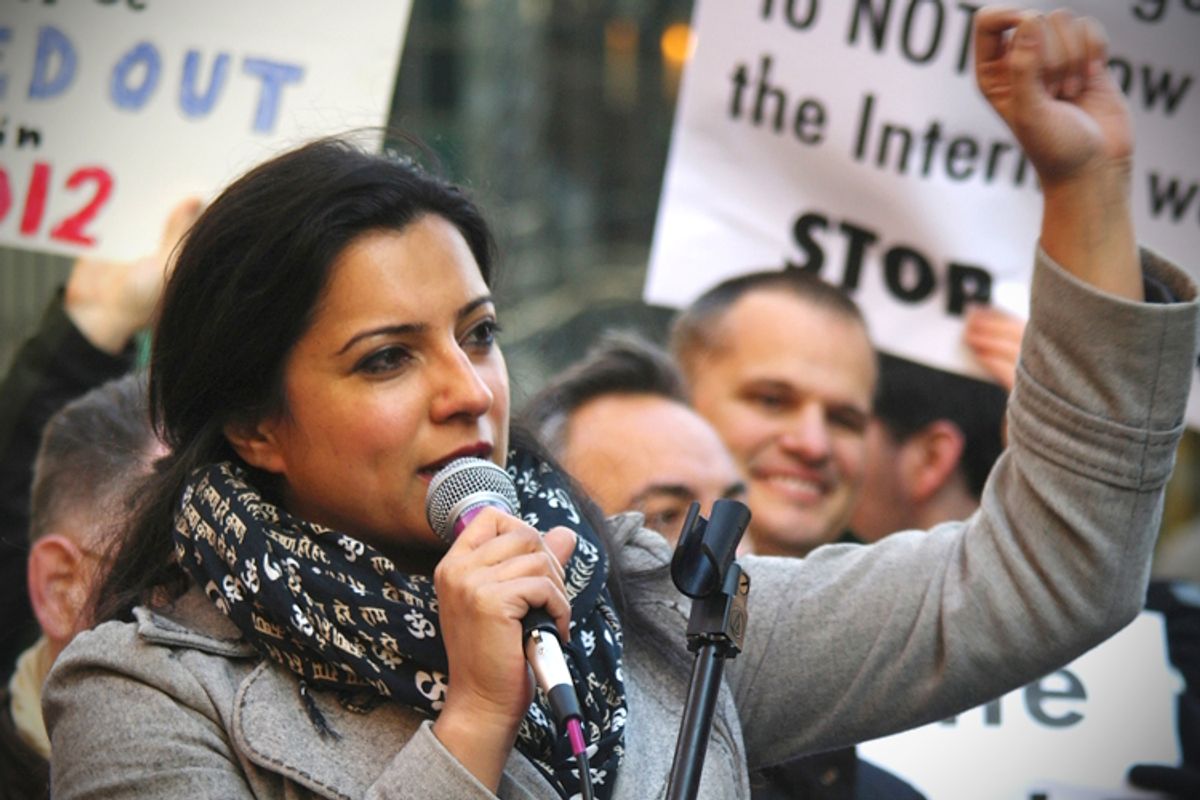 Pity the poor Wall Street Democrat. Well, you don't need to pity them that much, because they're rich, but the Wall Street Democrats are in a bit of a tough place right now, what with leftish ideas once again resurgent in the Democratic Party and everyone in America still hating everyone involved in high finance, with very good reason.

So what are you to do if, say, you spent years working as a hedge fund attorney, and all your friends and colleagues are in the finance industry, but you really, really want to get elected to something in a liberal city as a Democrat? If you're Reshma Saujani, you just pretend you never had anything to do with Wall Street and hope no one digs too deep.

Saujani is running for New York City public advocate. New York's public advocate, one of only three city-wide elected offices, is sort of like the city's "ombudsman." The advocate's job is essentially to annoy the mayor as much as possible, and then run for that office. The advocate is expected, to put it broadly, to look out for "the little guy," against the city's bureaucracy and police department and so on. The job, thus far, has always gone to liberal, populist figures; Democrats have held the post since it was created in 1994, even as the city repeatedly elected Republican mayors.

Saujani, according to her campaign website, is the co-founder of "Girls Who Code," a nonprofit that encourages girls to study and pursue careers in science, technology and math. She is the daughter of refugees, and she earned degrees from the University of Illinois, the John F. Kennedy School of Government, and Yale Law School. She was, briefly, deputy public advocate under current mayoral candidate Bill de Blasio.

Oddly, her campaign biography doesn't mention anything about Saujani's career, which, before she began running for things, was spent working for Wall Street. Tom Robbins got Saujani to give up her closely guarded résumé in 2010. Saujani has worked at one prestigious law firm and three hedge funds. At the law firm, Davis Polk & Wardwell, Saujani defended securities fraud cases. She worked for two years as an affiliate of the Carlyle Group, Carlyle-Blue Wave Partners Management, that invested in mortgage-backed securities. Then she went to Fortress Investment, a fund that "was revealed to own a subprime mortgage lender that foreclosed on New Orleans homeowners who fell behind on their payments after Hurricane Katrina."

None of this material is on Saujani's Wikipedia page, by the way. According to Wikipedia, Saujani's entire career consists of founding "Girls Who Code" and doing pro bono work for asylum seekers. The stuff that she did to actually make money used to be in her Wikipedia entry, but her campaign deleted all of it in January. Seriously. The Saujani campaign confirmed that they vanity-edited the Wikipedia page to remove negative information, a violation of Wikipedia's Conflict of Interest policy. (Amusingly, one of the edits removed a link to one of my pieces.) Saujani's current campaign paints her as the candidate of the South Asian community, the tech community and young people, women in particular. She was a speaker at Newsweek's "Women in the World Summit." Twitter founder Jack Dorsey will host a fundraiser for Saujani later this month. The campaign boasts that a significant portion of her fundraising haul came from the tech sector.

The tech sector is a much more popular sector than the finance sector, which is likely why Saujani doesn't note that 20 percent of contributions to her campaign so far have been made by people connected with finance, according to an analysis of Saujani contributors listed at New York's Campaign Finance Board database. This includes donations of $4,950, the maximum amount allowed by New York law, from Morgan Stanley's John Mack, MasterCard CEO Ajay Banga, and various partners at firms you've never heard of with "Capital" in the name. (This being New York, no one is entirely free of Wall Street's tainted money. Her primary rival for the public advocate job, Daniel Squadron, has also received money from the finance industry. And also from the Winklevoss Twins, for some reason.)

It is almost sad that Saujani feels the need to downplay her actual career, which made her rich and popular enough to now run for office repeatedly. (Again, almost.) Once, she was not so shy.

I am going to be honest: While I do think the story of a finance-connected Democrat doing her best to wipe her entire career from the record in order to win a primary says something quite interesting about the state of the party in 2013, and the economic policy fault lines that could eventually break apart the Obama coalition, I am primarily writing about Reshma Saujani because it brings me joy to remember the awfulness and hilarity of her 2010 campaign, in which she waged a very expensive and doomed primary challenge against Rep. Carolyn Maloney.

In that race, Saujani portrayed herself as a forceful voice for Wall Street, against those that would seek to destroy it. She was supported by -- or perhaps foisted on New York by -- the worst people in New York, in many cases the same ones who tried very hard to get Harold Ford a Senate seat. This is the New York Times story that introduced Saujani to many New Yorkers. Saujani said she was "running on my Wall Street record, not from it." And she really, really was.

“Instead of browbeating Wall Street, I want to invite them to help create jobs,” Ms. Saujani said, talking up an idea to connect investment houses with technology start-ups.

This all seemed to confirm that Saujani thought the district she was running to represent consisted entirely of of people who thought like her and her quite well-to-do friends, rich bubble-dwelling power brokers who were annoyed with Maloney for not being one of them.

The easiest way to understand the confusion is to remember that among New York finance people, it is universally accepted that finance is a virtuous and unfairly maligned endeavor, though for all the maligning they complain of, few of them are ever actually exposed to critical voices of any kind. With people like Maureen White and Diana Taylor whispering in her ear, it is understandable that Saujani thought "I will fight for Wall Street" was a winning political message in a Democratic primary.

Alas, it wasn't. New York has a lot of money, and it also has a lot of people who don't have any of it. The city has more food service employees than financiers.* The 14th District included Manhattan's old money East Side -- and also working- and middle-class Astoria, Long Island City and Sunnyside, Queens. The market-utopian fantasies of the 1990s were long dead, and liberals (and conservatives) nationwide were furious that Wall Street had just survived the disaster it created essentially unbowed and largely unrestrained. Saujani had badly miscalculated.

In 2010, even Sen. Chuck Schumer wasn't defending Wall Street, at least in public. By this point Anthony Weiner, a particularly craven political actor, had gone from parochial outer-borough Schumer-in-training to full-throated economic populist. But Saujani's initial press coverage was full of quotes like the ones she gave to the Times. Take, for example, this Washington Post story -- reported from "cocktail hour on the Upper East Side of Manhattan" -- in which Saujani is quoted saying: "'We need to extend a hand rather than a fist' to Wall Street ..."

It was not long before the Saujani campaign realized they needed to rebrand. So not long after various stories accurately labeled Saujani -- based on her own words, in interviews -- a "Wall Street Democrat," Saujani attempted to paint opponent Maloney as the real candidate of Wall Street, because Maloney had raised money from financial institutions ... just as Saujani had.

Her campaign got intensely, weirdly negative -- partly because of the Maloney's not one of us thing, and also because the people Saujani represented were pissed off and resentful in general for being blamed for breaking the entire world economy -- with Saujani sending out a mailer falsely claiming that Maloney had been the target of an Ethics Committee investigation, and her friends repeatedly insinuating that Maloney was too dumb to represent New York. But it was Saujani who stepped in it every time a reporter was on hand to write down the things she said. This was, possibly, the line that encapsulated the entire Saujani campaign:

Saujani described her ability to mobilize South Asian support as “one piece of a larger strategy, which is getting our Obama-surge voters—people who have not traditionally been part of the political process. Like, we spend a lot of time on Upper East Side moms under the age of 45 who have house parties for us after drop-off.”

After a pause, she added, “I’ve spent a significant amount of my time in Queensbridge and Ravenswood and Astoria housing and in public housing.”

That is quite a specific demographic.

Having spent $1.3 million attempting to unseat Maloney, Saujani received 6,231 votes in the primary, losing the election 81 to 19 percent. (That information, too, was deleted from her Wikipedia page.) Saujani promised to run again, though she apparently meant that she'd run for a different office, as an entirely different candidate.

The fact that Reshma Saujani feels the need to paper over her past is a small sign, perhaps, that finance's grip on America's entire political system is a bit shakier than it appears.