Will the Christian right flee the GOP? 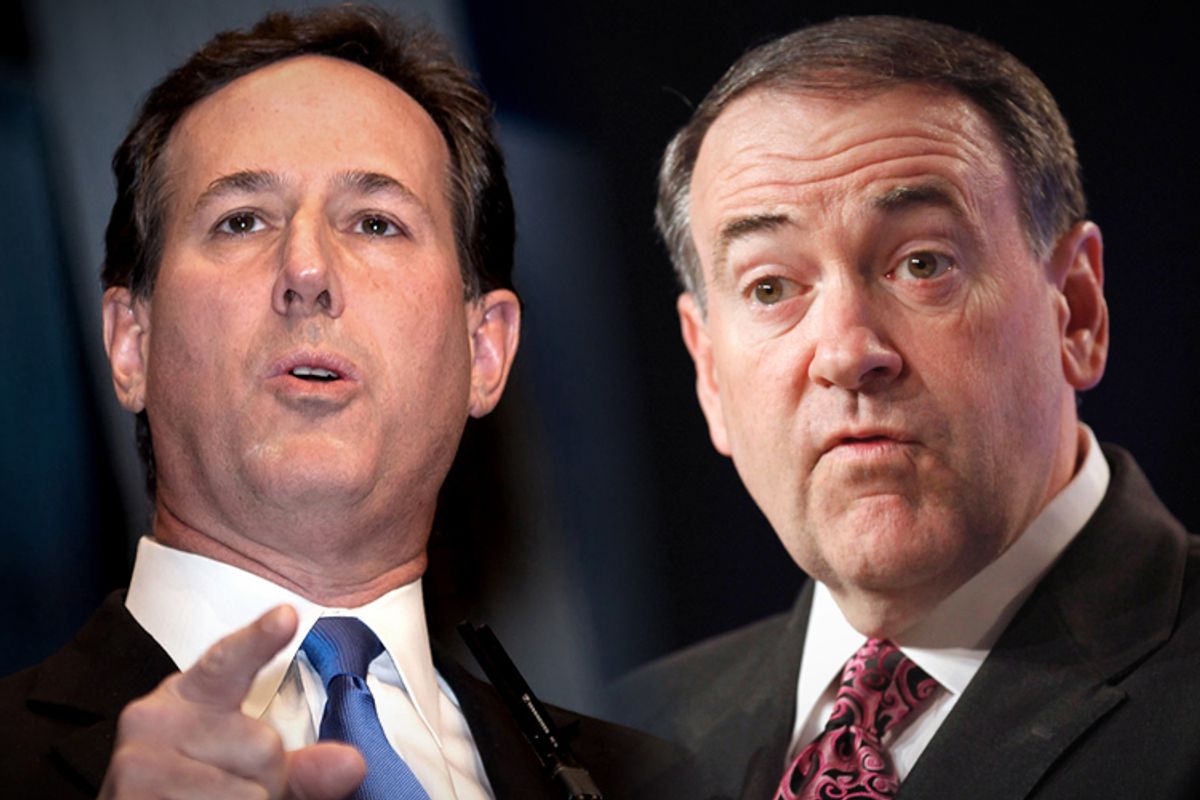 Will social conservatives really make good on their threats, and form their own political party? With the course of history and their own political allies leaving them in the dust, the group is facing an existential crisis that has left them at the nadir of their power with no obvious path to recovery -- and now they're getting desperate.

Inside the conservative movement, the Tea Party has displaced evangelical activists as the dynamic force, pushing economic issues ahead of social ones, while voters affirmed their support for gay rights and punished candidates with restrictionist views on abortion in 2012. In their "autopsy report," the Republican National Committee essentially suggested abandoning social conservatives -- despite leaning on them heavily just a few years ago to elect and reelect George W. Bush -- and even the movement conservatives at CPAC had little appetite for the Christian-right causes of yore.

Needless to say, social conservatives who are not happy about this state of affairs are lashing out against their friends, threatening to leave the GOP if it doesn't join them on the wrong side of history.

“The vast majority of the GOP base believes that marriage is a non-negotiable plank," Family Research Council president Tony Perkins said recently. “If the RNC abandons marriage, evangelicals will either sit the elections out completely, or move to create a third party. Either option puts Republicans on the path to a permanent minority.”

Yesterday, Perkins and a dozen other social conservative leaders warned RNC committee members to affirm their opposition to same-sex marriage at the annual spring meeting, happing now in California, or face the consequences. "We respectfully warn GOP Leadership that an abandonment of its principles will necessarily result in the abandonment of our constituents to their support," read their letter, obtained by NBC News.

Other signatories included American Values president Gary Bauer, who recently threatened, "If you bail out on this issue, I will leave the party and I will take as many people as I possibly can.”

And at least three former Republican presidential candidates are echoing the calls, and even hinting at the creation of a third party. If the GOP gets loose on marriage, "they’re going to lose a large part of their base because evangelicals will take a walk,” former presidential candidate Mike Huckabee told Newsmax the other day. "Many of us, and I consider myself included, base our standards not on the latest Washington Post poll, but on an objective standard, not a subjective standard.”

Just a few years ago, during the 2008 election, Huckabee flatly rejected the idea of forming a third party to push the Christian-right message. "I don't see that being a good strategy for those who really care about pushing a pro-family, pro-life agenda," he said, explaining that social conservatives should work from within the GOP to advance their agenda.

Meanwhile, Rick Santorum warned supporters in an email this week that “an alliance of political consultants and unprincipled politicians want to throw social conservatives like you and me out of the Republican Party."

Santorum told the Des Moines Register last week that "it would be suicidal if" the GOP walked away from the fight on marriage.

Shortly after the November drubbing, Herman Cain was even more forthright. “I never thought that I would say this," Cain told social conservative extremist Bryan Fischer, "but we need a third party to save this country. Not Ron Paul and the Ron Paulites. No. We need a legitimate third party to challenge the current system that we have."

In California yesterday, the RNC resolutions committee passed a measure to reiterate the party's belief that marriage should only be between one man and one woman, and the full committee is likely approve the measure tomorrow, but it's unclear if that will do enough to apease social conservatives. There are plenty of planks in the platform the party never discusses, and same sex-marriage could easily be something that is opposed in name only, without any real rhetoric or organization heft thrown behind it.

And why should the Republicans bend? Third parties have almost uniformly failed in American history, and nothing -- neither demographics, money nor public opinion -- is on the side of the breakaway traditionalists.