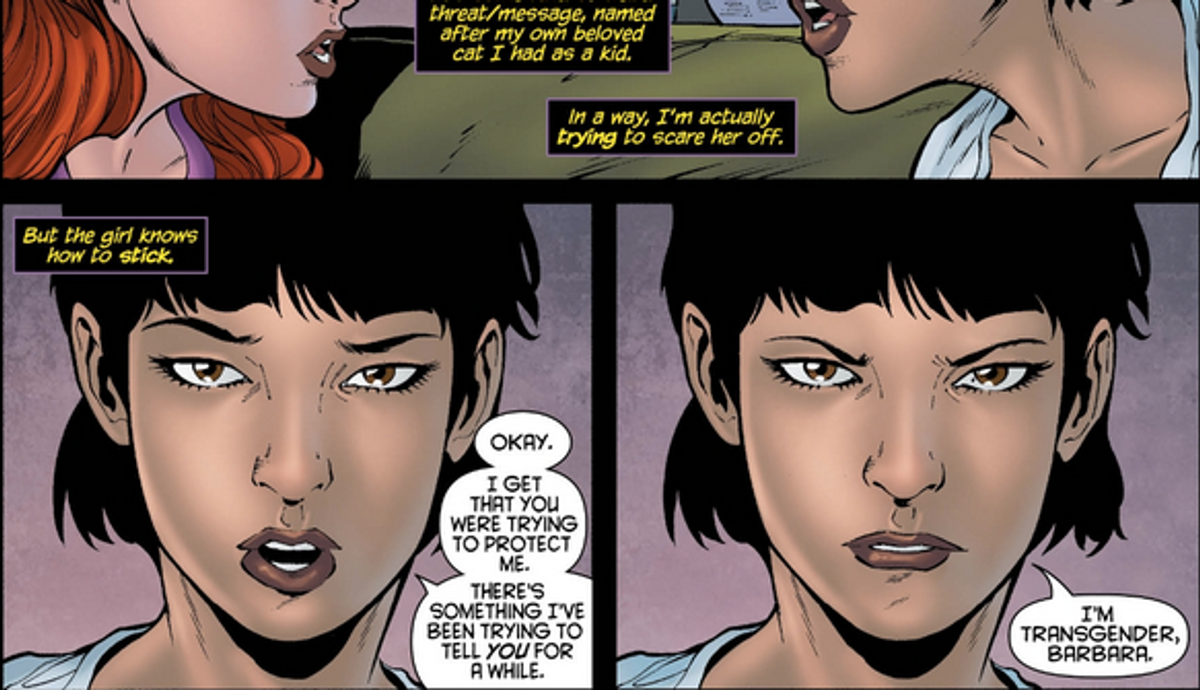 The character Alysia Yeoh will come out to Batgirl as a transwoman in the current issue of of the comic "Batgirl." The gender reveal is a first for a featured character in a mainstream comic series, and for plenty of other cultural mediums devoid of trans representation.

"Batgirl" writer Gail Simone told Laura Hudson at Wired that the inspiration for the character came from a conversation with a fellow writer -- and a desire to mirror the diversity of comic readers themselves:

“I looked out into the audience, saw dozens of faces I knew well — LGBTQ folks, mostly — all avid comics readers and superhero fans and DC supporters,” said Simone. “And it just hit me: Why was this so impossible? Why in the world can we not do a better job of representation of not just humanity, but also our own loyal audience?”

Simone suggested the story to DC Comics Co-Publisher Dan DiDio at lunch one day, prepared to offer a passionate defense for the idea of a transgender character. ”I thought I might have to sell it, so to speak,” said Simone. “But he just paused for a moment, asked how this would affect Barbara’s story, and immediately approved it. And we went back to our excellent nachos.”

Still, Simone believes that diversity isn’t just a continuing issue for superhero comics: “It’s the issue for superhero comics. Look, we have a problem most media don’t have, which is that almost all the tentpoles we build our industry upon were created over a half century ago… at a time where the characters were almost without exception white, cis-gendered, straight, on and on. It’s fine — it’s great that people love those characters. But if we only build around them, then we look like an episode ofThe Andy Griffith Show for all eternity.”

As Hudson notes, shapeshifters and other magical conceits have long given comics a kind of gender fluidity uncommon in other mediums, and transgender characters have previously been featured in smaller indie and mature (read: sexy) comics. But Yeoh's coming out plotline is a big first for such a mainstream series.

And if readers are upset by the introduction of a transwoman into the Bat universe? Too bad, haters. As Simone told Wired: "I just could not care less about that. If someone gets upset, so be it; there are a thousand other comics out there for those people.”

A page from issue 19 of Simone's "Batgirl," with art by Daniel Sampere and Vicente Cifuentes: