Pretending to know about North Korea

Want to know what's going on in the Korean peninsula? So does the entire American press 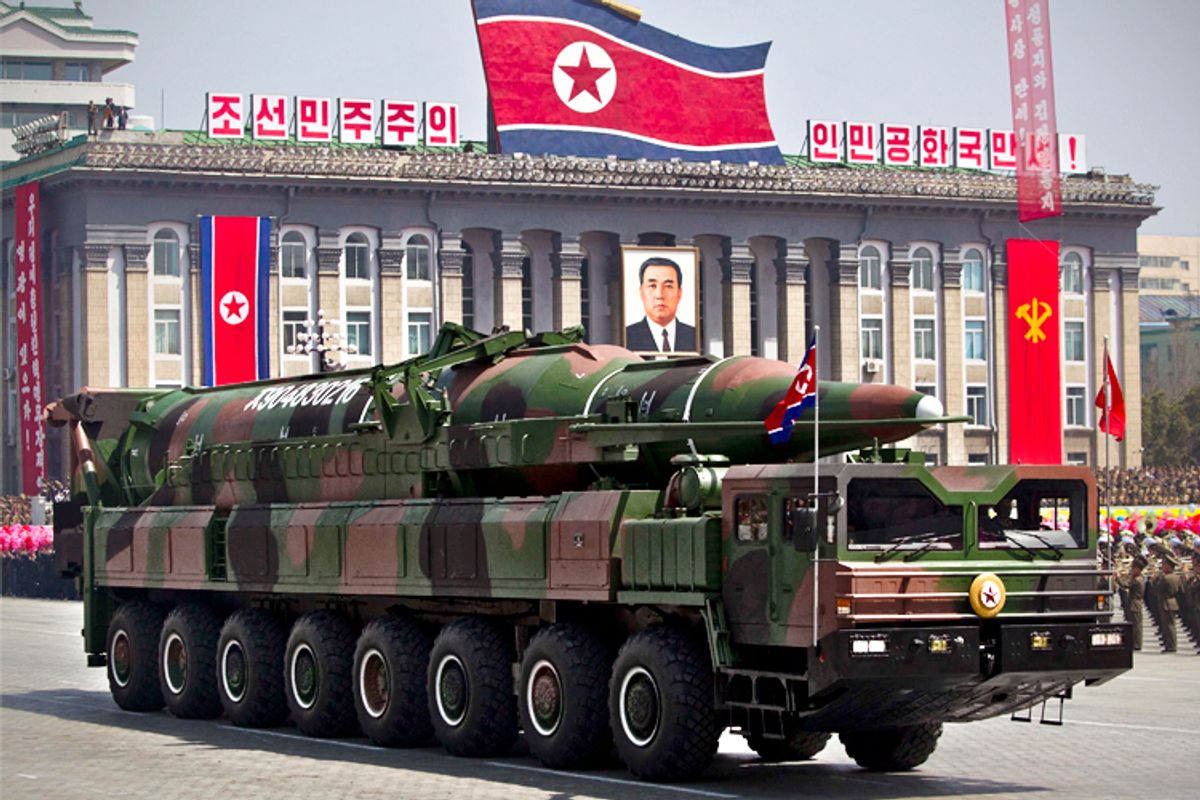 A North Korean vehicle carrying a missile passes by during a mass military parade in Pyongyang's Kim Il Sung Square to celebrate the centenary of the birth of the late North Korean founder Kim Il Sung. (AP/David Guttenfelder)
--

Here's what I know about North Korea: Its tween dictator keeps saying he might have to nuke everyone if they don't stop bugging him and no one agrees on whether he has the ability to nuke anyone. The Defense Intelligence Agency says North Korea has "low reliability" missiles that could carry nuclear warheads. But that is not the consensus view of the intelligence community, according to other sources. Officially, the U.S. does not believe that North Korea could launch a nuclear armed missile. But, you never know! Seriously, you never know, because no one knows what North Korea is thinking and what it is capable of. That lack of knowledge does not stop our intrepid news-content creators, though!

This is the sort of story that our newsmedia is absolutely awful at covering. Most people on cable news are brainless idiots hired primarily for their ability to talk on camera for long periods of time without saying "uh" that often, and even when they have a simplistic-but-workable grasp of domestic affairs they rarely know shit about the rest of the world. North Korea is a secretive hermit state that even the CIA can't penetrate, and every report on the capabilities and motivations of the primary actors there will by necessity involve a lot of guesswork.

Making matters worse is that our political press frequently moonlights as our foreign affairs press. And that press thrives on partisan conflict and has an innate bias in favor of "action." (Every Sunday show features a foreign policy panel in which multiple participants inevitably agree that America needs to "do something" about the situation in some other country. "Do something" is always considered sound, serious advice.)

Honest reporters usually acknowledge that no one knows anything. I mean, maybe John Kerry and Chuck Hagel know something, but I bet even they are operating based on a lot of educated guessing right now. But do you know who certainly don't know shit about North Korea? Pundits. The great Jack Shafer already described the various clichés beat reporters have to cycle through when covering North Korea. "Pyongyang reliably remains defiant; talks have resumed or been proposed, canceled, or stalled, while a U.S. envoy seeks to lure the North back to those talks to restart the dialog ..." While actual reporters have to put in effort to explain, again, as always, that they don't know shit, pundits, who know less than shit, can just freely pretend to have very well-thought-out opinions about what we must do.

The Daily Beast's Eli Lake talked to a bunch of proper, accredited experts and all those experts were basically like "we're mostly guessing here." Bruce Bennett from the RAND Corp. has no clue:

Charles Ferguson from the Federation of American Scientists has no clue. (But he is pretty sure the North Koreans couldn't hit America with a missile, so far.) Simon Henderson from the Washington Institute for Near East Policy has no clue, but he is very concerned.

This rampant uninformed speculation seems harmless until you recall the sort of effect hysterical uniformed speculation has had on America's foreign policy in the past. It became clear in the run-up to the Iraq War that the news media was a very useful tool to get the public on board with wars. Through insinuation and misdirection, the false notion that Saddam Hussein was in some way responsible for 9/11 was spread with very few examples of actual lies from the administration -- they just made the suggestions and let the idiot-media run with it.

Terrifyingly, our ruling elite generally consume much of the same media that our dumbest blog commenters comment on. On the conservative side, especially, this is worrying. Republicans are naturally bellicose and belligerent -- they act, in fact, basically exactly like our political class always claims rogue regimes in places like North Korea and Iran act -- and hence will basically always demand immediate war everywhere.

The National Review has a guy who just keeps writing these long-winded faux-erudite blog posts saying diplomacy is useless and makes us look weak so we must immediately restart the Korean War. (The fact that, thus far, North Korea has not yet attacked anything would seem to be an argument in favor of talks and diplomacy, but that is apparently just more Weakness talking.) Readers of the right's premier magazine of ideas are getting analysis from a guy who thinks this is good advice:

We never respond as we should, which is to dare them to shoot off a missile, and then answer by trying to knock it out of the sky or spending a few million borrowed dollars on fostering instability inside the country so as to embolden what opposition forces may be hiding about.

I am pretty sure "dare them to nuke someone" is bad advice, and also we are surely already spending a fortune of our black budget on "undermining" their regime, with comical results.

Because American politics is frequently more ridiculous than satire, House Republicans were briefed on the North Korea situation by Dick Cheney. He was wearing a cowboy hat and he told Republicans that Kim Jong-un is sort of like Saddam Hussein because "you never know what they're thinking." These people run an arm of the federal government, and this is the knowledge base they're working with: Kim Jong-un sort of reminds Dick Cheney of Saddam Hussein.

It seems highly unlikely that North Korea will develop the ability to attack the United States with a nuclear weapon in the near future. In a reasonable world, that would be the salient fact repeated early and often by the press, instead of vague and conflicting reports of intelligence suggesting nuclear annihilation. As North Korea and Dick Cheney have repeatedly demonstrated, this is not a particularly reasonable world.