And the Keystone XL pipeline could prove even more catastrophic than the oil spill in Mayflower, Arkansas 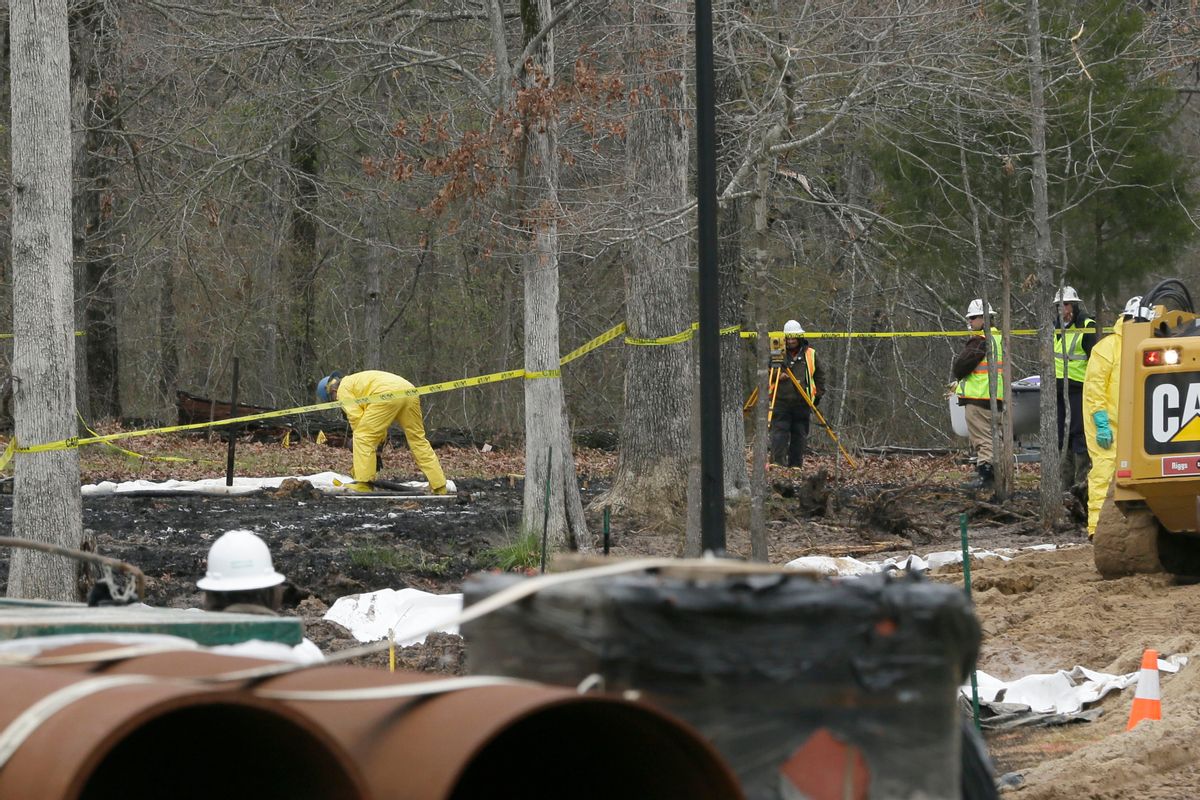 Crews work to clean up from an oil pipeline spill in a Mayflower, Ark., neighborhood. (AP/Danny Johnston)
--

It's now been almost two weeks since ExxonMobil's Pegasus pipeline spill put at least 500,000 gallons of tar sands crude and contaminated water into the Arkansas community of Mayflower. Many of the evacuated families still haven't been able to return to their homes.

Sierra Club organizer Glen Hooks, who grew up about 20 miles southeast of Mayflower, in Gravel Ridge, attended a meeting for the displaced families at Mayflower High School: "I had to really stare down some ExxonMobil goons who told me to leave because it was a private meeting. I politely explained that it was a meeting in a public building about a public subject with numerous public officials in attendance, and that I was planning to stay."

Glen's soft-spoken, but he's not easily intimidated. Arkansas Business Journal named him an "Eco-Hero of the Year" for his work in helping to stop new coal-fired power plants. During the Mayflower meeting, Glen listened as an ExxonMobil executive apologized to the families and said that the focus was on safety and helping the homeowners. "The meeting then moved into a phase where ExxonMobil met with individual family members about their claims in a side room guarded by no fewer than six uniformed police officers."

Here's something that ExxonMobil probably didn't tell those homeowners: In 2010, it was fined $26,200 by the U.S. Department of Transportation's Pipeline and Hazardous Materials Safety Administration for failing to regularly inspect each point where the Pegasus line crosses under a navigable waterway.

This is a pipeline that crosses under the Mississippi River (just one of the places ExxonMobil failed to do inspections). It's hard to say which is more shocking: That "safety first" ExxonMobil has been so cavalier about pipeline inspections or that it was fined such a pittance for its irresponsibility. By my calculation, $26,200 comes out to about .00009% of ExxonMobil's net income for 2010. Let's put that in perspective. If ExxonMobil's income were the same as the median family income in Faulkner County, Arkansas, which is where its pipeline leaked, then ExxonMobil's fine for putting the Mississippi River at risk would have been not quite four cents.

No matter how much ExxonMobil ends up spending to clean up the mess in Mayflower, the impact on its profit statement will be miniscule. Unfortunately, no amount of cash can buy peace of mind for the families whose homes were violated by tar sands. Tar sands crude is both more toxic and much harder to clean than ordinary crude. Just ask Enbridge, which has now spent almost $1 billion and two years trying to clean up the Kalamazoo River after the largest onshore oil spill in U.S. history. Enbridge has experience, too. There were 804 spills on its pipelines between 1999 and 2010.

No wonder ExxonMobil is doing everything it can to keep reporters and everyone else as far away from the Mayflower disaster as possible. The more the American public learns about the real cost of tar sands crude, the more opposition to the Keystone XL and other tar sands projects will increase.

Keystone XL opponents often point out that Americans assume all the risk of tar sands pipelines, while oil companies will rake in all the profit from tar sands exports. But let's be clear about the sort of risk we're talking about. If the pipeline is built, it's not a question of whether it will fail, but of when and where. We're not risking a disaster. Disaster is certain. We just don't know what the exact magnitude of the disaster will be. What if the Pegasus pipeline had failed under the Mississippi rather than in Mayflower?

Here's something we do know: The first Keystone XL disaster will be far worse than what happened in Mayflower, since TransCanada's pipeline will pump ten times as much tar sands crude as the Pegasus does.

I wish the disaster in Mayflower had never happened. Now that it has, though, I hope we heed its two biggest lessons: 1. How oil companies talk about safety has no connection to how they act. 2. The last thing you want to wake up and find in your backyard is a tar sands spill.

We have a few days left. Tell the president to keep his climate promises.