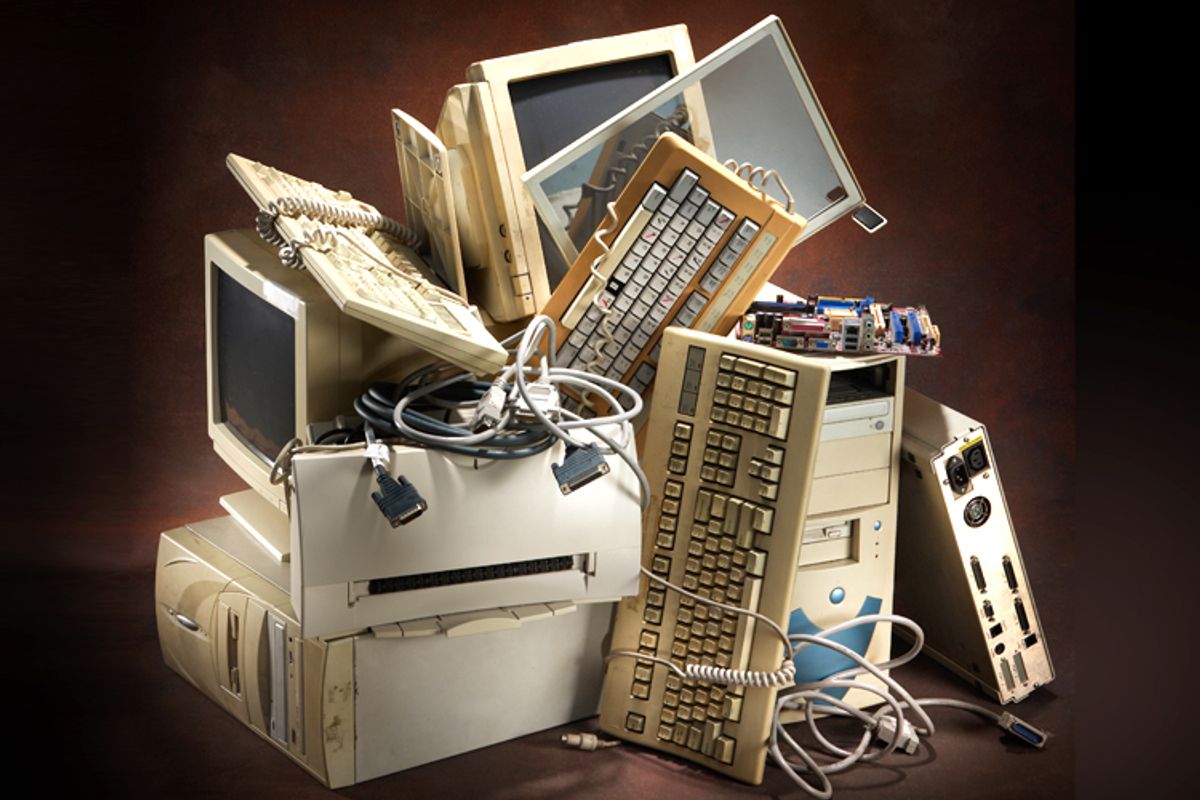 Waiting for a stoplight to turn green on my way to the post office, I pulled my phone out of my pocket to check the score of the Giants game and see what was popping on Twitter. I saw a link to a Wall Street Journal headline: "Computer Sales in Free Fall." I clicked and read the first line: "The personal computer is in crisis ..."

And then the light turned green, and the phone went back in my pocket, accompanied by a furrowed brow. The personal computer is in crisis? How can that be? More so than ever before, everyone I know, everywhere I go, is tethered to a personal computer, even if we still call them "phones." We're addicted to the damn things, constantly distracted and interrupted and obsessed by them. We check them at stoplights, while waiting in line, in the bathroom, in the middle of real live conversations with human beings who are standing right in front of us. The personal computer isn't in crisis -- we are!

OK, it's true: If you define a "personal computer" as that clunky old desktop monster that you used to replace every two or three years or that lead-weight laptop that was once your faithful companion, a "crisis" of sorts is occurring. According to reports released this week by industry analysts IDC and Gartner, sales of PCs just recorded their worst quarter since 1994. The word "carnage" is getting a lot of play. Sales had already been dropping fast for the entire past year, but the rate of implosion is accelerating. Although some industry observers are pinning the blame for 2013's plummet on the stark lack of interest displayed by consumers in Microsoft's Windows 8 operating system, the real reason for this phase shift is obvious: We've outsourced a vast portion of our computing lives to phones and tablets. We just don't need our desktops and laptops very much anymore. Saying the personal computer is in crisis right now is kind of like saying the horse-and-buggy sector went into a "crisis" when motorcars arrived on the scene. Same as it ever was!

The ongoing transition will be tough for the companies that are heavily invested in the PC sector. Free fall is no joke if you are Dell or HP or Microsoft. But the sales drop is not really a crisis in the sense that it threatens the larger economy or requires some kind of government policy response. We're still spending plenty of cash on tech. This is market evolution in action, and just as a matter of historical interest, it's fascinating to watch, a speeded-up time-lapse video of extinction-in-action. "Disruption" has become a bit of a dirty word in some sectors lately, a piece of jargon that means less and less the more it is integrated into marketing campaigns, but that doesn't mean disruption isn't happening all around us. We've watched the Internet "disrupt" existing business models for journalism, music and maybe education. Now we're watching the personal computer industry disembowel itself!

But my exclamation point is probably misplaced, a signifier of my ability to remember a pre-PC era, a consequence of belonging to a generation that still can be surprised by sudden technological change. Maybe the most intriguing thing about "the death of the PC" is how hard it is to explain its significance to someone who has grown up in an era characterized by constant technological disruption and incessant phase transitions. My son just shrugs: So what else is new? The deep structure of contemporary life -- as it intersects with technology -- is now in a state of permanent ADHD revolution. PCs are going the way of the woolly mammoth -- so what? This is how we live now. Yesterday's hot app or Facebook meme or new smartphone model is today's woolly mammoth. Our default stance now incorporates inevitable ephemerality.

Matt Buchanan published a thoughtful post in the New Yorker on Wednesday noting that "the rise of Snapchat among the under-twenty-five set ... is wholly unsurprising" once you grasp the attraction of instantly deleted photos in the context of a life where too much of what you share sticks around forever. I was struck by his post, but not because after watching my daughter use Snapchat over the Christmas break I had made essentially the same argument in January. Instead, I was reminded that just three weeks ago, when I visited my daughter at her college, she casually told me that "Snapchat was over." Her friends had mostly moved on to other obsessions.

Now, from what I can tell, Snapchat is still growing rapidly. One anecdote doesn't necessarily spell doom for one of the year's breakout apps. But uneasy lies the head that wears the crown! New data suggesting that teenagers are already abandoning Facebook and Twitter and even YouTube for who knows what has to be sending scary tremors through everybody who has a business model based on capturing the attention of the mobile generation. Youth has always been defined by a predisposition to fickle passion, but there's something deeper happening now. The way we use our technology is training us to be ever more fickle.

The creative destruction of the old PC industry at the hands of the mobile generation is a perfect metaphor for today's techno-zeitgeist volatility. The stream of P.R. pitches I get promising that the newest app will disrupt, oh I don't know -- the established order of flower arranging! -- is both irredeemably moronic and yet at the same time on to something important. We live in a state of constant disruption. Distraction is disruption. The merger of social media and mobile devices has trained us to click on anything that promises a quick thrill -- that hilarious squirrel video or great Russell Brand essay on Margaret Thatcher -- or to join the latest craze -- Harlem Shake, anyone? -- and then abandon it just as quickly. That training also psychologically prepares us to thrive in an era where today's Facebook is yesterday's MySpace and tomorrow's smartphone is next week's paperweight. We are evolving into drunken dragonflies, flitting spastically from one evanescent passion to the next, from app to app and meme to meme.

Just a month ago, I heard science fiction author Bruce Sterling express his amazement at SXSW that in just the span of his life he would witness the rise and fall of the "personal computer." A month later it’s hard to deny the premise that this instant-Ozymandias obsolescence is the new normal.