Top 5 investigative videos of the week: Somali pirates are not what they seem

From would-be Jack Sparrows to deadly-real U.S. soldiers, a look at the best docs YouTube has to offer 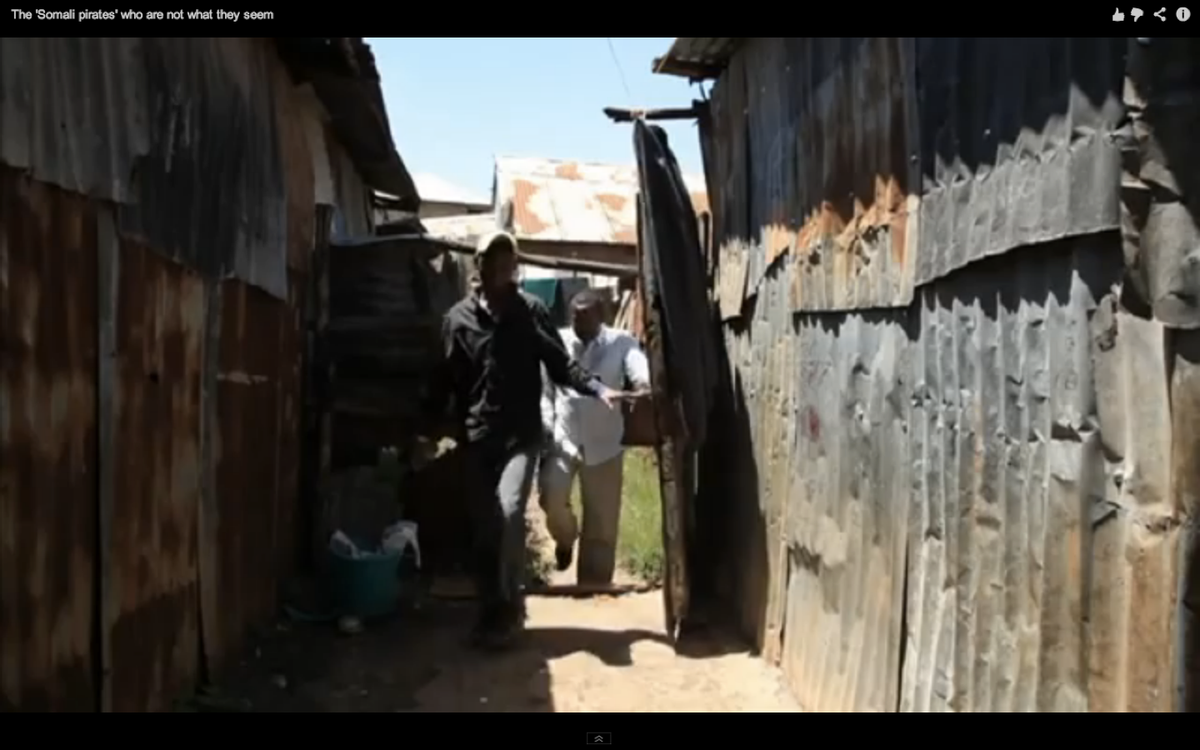 Scene still from "The 'Somali pirates' are not what they seem"
--

This week’s picks include investigations into the burgeoning business of drones, fake pirates and several all-too-real wars.

In our ongoing partnership with Salon, the editors of The I Files have compiled our selections of the week’s best investigative videos culled from traditional news outlets and independent producers. These include breaking stories, as well as archival pieces that offer deeper insights into current headlines. But these are just our choices – let us know what you think.

For a first look at the latest investigations that you might otherwise miss, please take a moment to subscribe to The I Files channel on YouTube. Subscribing costs nothing, requires no commitment and is 100 percent pain-free. Think of The I Files as a friendly drone whose sole mission is to go out into the Internet and gather the best videos for your perusal – only without the whole creepy, big brother, robotic angle.

“The Bombing of al-Bara,” Olly Lambert for PBS FRONTLINE

While shooting a documentary for FRONTLINE, filmmaker Olly Lambert went to meet with a Syrian rebel commander in the village of al-Bara, in the northern part of the country. As tea is being served, a government bomb strikes a house about 300 meters away. After contemplating whether to flee the area (as his driver vigorously urges him to do), Lambert decides to investigate and keeps his camera rolling. The result is this incredibly immersive and deeply riveting account of the fallout of the attack.

In his commentary, Lambert tries to make sense of the gruesome events that are unfolding in front of him. At one point, you can hear his frustration bleed out into the scene. When bystanders hold up an ambulance so he can film the injured man inside, you can hear him yell, “Get him to a hospital, you idiots!”

As he deals with his fear that government planes will return and drop more bombs, Lambert senses that this scene, while horrific, is also strangely routine for Syrians who have lived through two years of a violent civil war. Amid the carnage and devastation, Lambert notices small revealing details, like a mother blithely pushing a baby carriage past the huge plume of smoke from a bomb or the man standing in a doorway, casually lighting a cigarette as he watches horribly injured civilians being evacuated.

“When I first arrived in Syria, people would often say to me, ‘Here, your life can end in a moment. Any minute now, you could be dead,’” Lambert recalls. “And at first, I didn’t believe them, but certainly after an experience like this, it’s hard not to feel that they’ve got a point.”

“The ‘Somali Pirates’ Who Are Not What They Seem,” Channel 4 News

I have to confess that this Channel 4 News piece about fake pirates and gullible journalists is one of my favorite stories I’ve seen in a while. Somali journalist Jamal Osman travels to Kenya to meet a group of men who make a living “pirating the pirates,” posing as Somali pirates for Western film crews.

Apparently, fake pirating is a big business in Kenya. Western journalists pay local fixers to find them pirates to interview for their TV reports on the dangerous trade. Would-be Jack Sparrows can earn up to $200 a day, if they can play their roles convincingly.

Osman tracks down a soft-spoken man who has been featured as one of the most feared Somali pirate leaders in Time Magazine and at least one European TV documentary. “Bashir” (that’s his nom de pirate) confesses with a laugh that he’s never even been to Somalia (although he has “seen Somali people”). He seems surprised that anyone believed he was a pirate in the first place.

“Why would a pirate act in a film?” he asks. “They don’t have time to tell their stories to white guys for money.”

Neither the “pirates” nor the journalists involved seem too ashamed by the revelation of this deceit. The Danish filmmakers who had been tricked by Bashir shrug off the deception, claiming one fake pirate doesn’t sully their overall reporting. Time Magazine failed to respond to Channel 4’s inquiry and has yet to remove the story from its website as of this writing.

“The Gatekeepers” – the Israeli film that prompted soul-searching in the nation – delves into the inner workings of the Shin Bet, the secret agency that provides security for Israeli leaders and spies on the occupied territories. Director Dror Moreh gained unprecedented access to six former directors of the service, who talk publicly about their experiences for the first time. These men – some of them quite old now – reflect on their tenures with bracing candor and relate some of the dilemmas they faced while in office. Several still are conflicted about decisions they made for an organization in which “there was no such concept as an illegal order.” They all come to the conclusion that Israel has no choice but to negotiate a two-state solution with the Palestinians.

In this excerpt from the Oscar-nominated film, former Shin Bet commanders discuss the ethics of targeted killing and the culture of impunity that prevailed in the upper echelons of the Israeli government. One former leader of the spy agency considers the moral burden of what it is like to have the power to order the instantaneous deaths of others.

“We all have our moments,” he explains. “You say, OK, I made a decision. And X number of people were killed. They were definitely about to launch a big attack. No one near them was hurt. It was as sterile as possible. Yet you still say, ‘There’s something unnatural about it.’ ”

“Be kind, be courteous and be ready to kill anybody.”

That’s how one U.S. soldier in Afghanistan describes his platoon’s motto. “In the counterinsurgency fight, you have to be … ready to be switched on because you never know who’s going to attack you.”

After a week in which five Americans were killed in a suicide bombing in Kabul, I was struck again by this simple piece from NPR’s archive about an Army unit serving a tour of duty during some of the bloodiest fighting of the Afghanistan War. Although the story was published in 2011, it still feels distressingly relevant as America’s longest war draws slowly to its conclusion.

Blending still photos and audio recordings, “Combat Post Chakrh” offers a snapshot of one unit as it faces the coming of spring in Afghanistan, when there is typically a spike in violence.

The most striking thing about the piece is just how tired these young men sound as they wait for their tours of duty to be over. When this story was recorded two years ago, they wondered when the war was going to end. Many still are asking the same question.

It seems like everywhere you look these days, there is talk of drones and concern over their growing use – from an announcement that the U.S. military has developed a new laser to shoot down enemy drones to new “Stealth Wear” clothing designed to help shy fashionistas avoid detection from above. Meanwhile, the Florida Senate just voted unanimously to ban law enforcement agencies from using surveillance drones on its own citizens, and many other states are considering similar laws.

This New York Times story goes to one of the epicenters of the nascent domestic drone industry: North Dakota. Here, entrepreneurs are preparing for what they see as a coming boom in the drone business, where unmanned vehicles can one day be used to inspect crops, scout fires, spy on suspected criminals and run search-and-rescue missions. In fact, North Dakota boasts the first university to offer a degree in unmanned aviation (and you had better not try to cheat in that class).

The drone industry is currently restricted by Federal Aviation Administration rules that regulate how commercial airspace may be used. However, the FAA recently predicted that once new airspace guidelines are approved, there could be as many as 10,000 commercial drones in the air by 2020. This video asks what the sky of the future might look like if unmanned aviation advocates have their way.