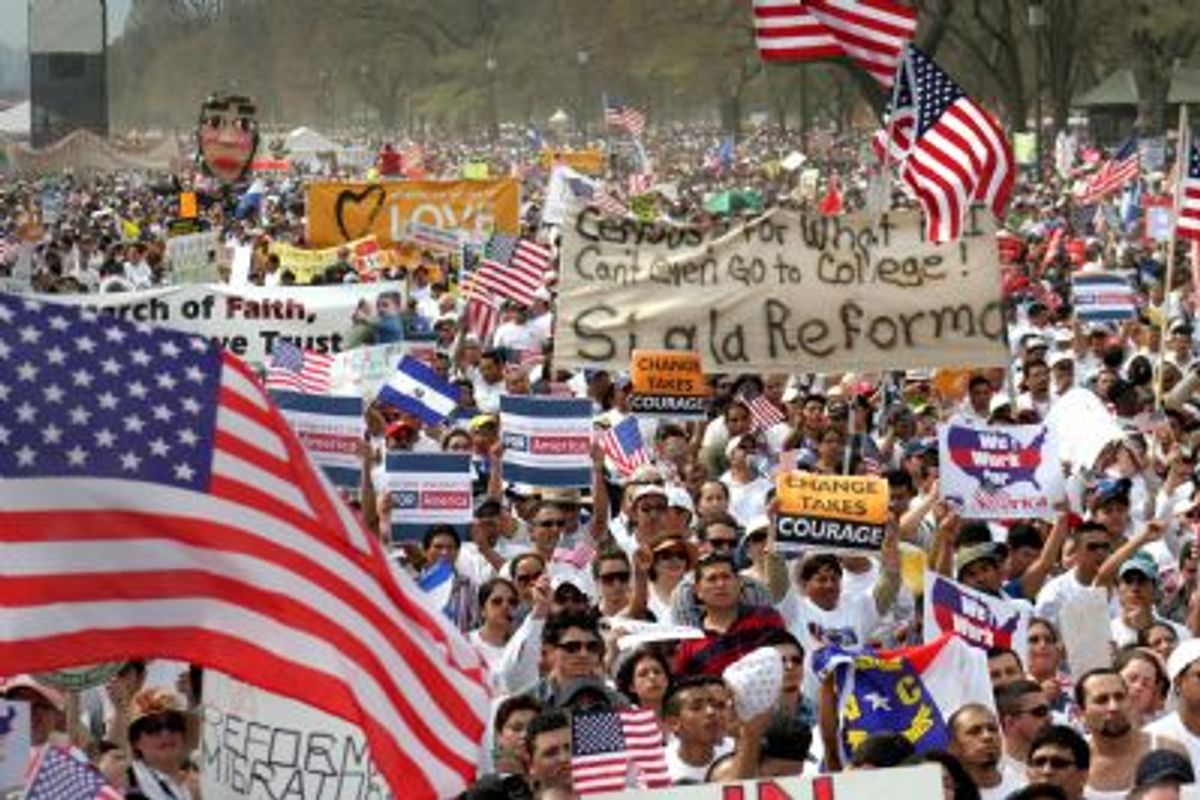 As Congress prepares to debate an overhaul of a dysfunctional immigration system, pro-reform Democrats may have new allies in Christian Evangelicals. A coalition of Evangelical leaders has begun a political push for a path to citizenship for undocumented immigrants, making a name for conservative Christians outside of the issues of marriage equality and abortion.

As reported by The New York Times:

On Wednesday, evangelical pastors will converge on Washington for a day of prayer and lobbying on Capitol Hill.

Guiding the campaign is a coalition called the Evangelical Immigration Table, which includes the top pastors of more than two dozen evangelical denominations and at least 20 heads of Christian colleges and seminaries. “It is very remarkable the degree to which there is consensus,” said Galen Carey, the vice president of government relations for theNational Association of Evangelicals, an umbrella group for the churches. No prominent pastor has spoken out against the immigration effort, although some pastors of the largest churches have remained silent.

Many of these pastors have been inspired to act by the growing influence of immigrant congregations in the Christian community and an upsurge in Latino “born-again” evangelicals, according to the Times:

For the Rev. David Uth, the head pastor of First Baptist Orlando, there was no mistaking the evolution of his traditionally white congregation, as he discovered in recent years that immigrants speaking at least 32 different languages had flocked to his doors. Mr. Uth is one of the pastors going to Washington this week.

His church offers ministry in seven foreign languages, with simultaneous translation of Sunday services in Spanish and Portuguese and a separate Brazilian service on Sunday evenings.

“The stories out there in the pews are stories of people from all over the world who have made friends and who have become close with people here,” Mr. Uth said after his service last Sunday. “I think that’s why there’s movement in this church, there’s momentum, there’s an openness to try to do something to address their needs.”

Despite a public push to let compassion and fairness shape proposals for reform, Christian leaders have splintered with other immigrant rights advocates over the inclusion of the rights of gay and lesbian immigrants in legislative reform. In an interview with the Christian Post, CEO of the Christian Community Development Association and pro-reform (for some immigrants, at least) evangelical Noel Castellanos stated his belief that immigration reform and gay rights should be handled as separate issues: "Right now, I can say as a general coalition we have talked to the President about trying to keep those two issues separate. It's very problematic."

But groups like United Latin American Citizens and the National Council of La Raza have backed the inclusion of provisions for gay immigrants and their families, citing the importance of family inclusion for all families: "Family unity has always been the cornerstone of our immigration system. We must address the unnecessary separation of families who are kept apart by extraordinarily long wait times for certain family visas, including the families of bi-national and same-sex couples," said National Council of La Raza president and CEO Janet Murguía.