I was a political astroturfer

The next time you see what looks like a grassroots rally, you may really be watching a form of performance art 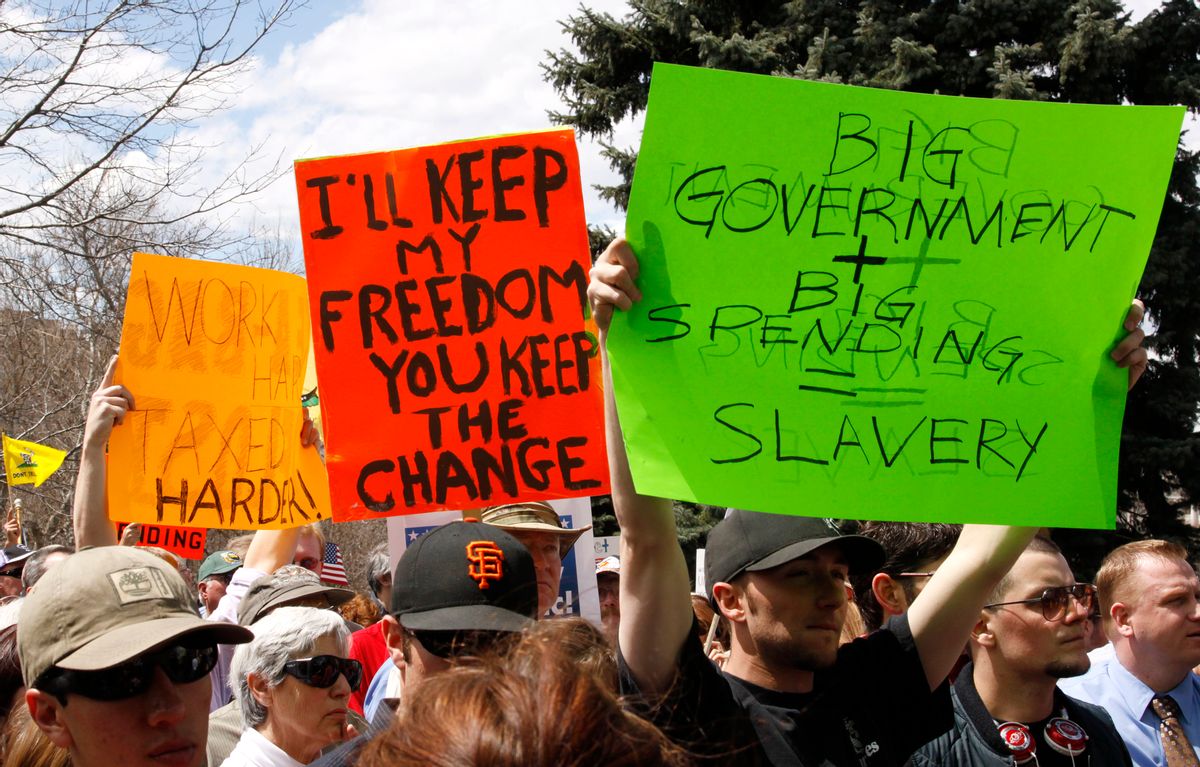 People wave signs at a "tea party" protest on the grounds of the Colorado state capitol in Denver April 15, 2009 (Reuters)
--

“There’s a movement building, and it’s spreading like wildfire,” announced Rafe Lieber of Citizens for Access to the Arts at a rally on the steps of Brooklyn Borough Hall early in January. With politicians, celebrities, a brass band and a screaming crowd, any passerby would conclude that some popular uprising was in the works.

Speaker after speaker, including City Council members and even Brooklyn-native actress Rosie Perez, gave impassioned speeches about the importance of providing access to art to young people, leading the crowds in chants of, “We’re not gonna stop!” “Fuel our dreams!” "We're coming for you!" and, most frequently, “Save Ovation!”

The participants were decrying the decision of Time Warner Cable to deny the arts network Ovation TV to poor and minority viewers. Cheering along with them, I suddenly heard a cell phone ring. The woman behind me, a fellow protester, answered, saying, “Can you call me back? I’m at work.”

While I had considered the rally more of a quick buck than work, her statement wasn’t technically wrong. Like me, many of the rally’s participants had arrived via the same November Craigslist ad for “TV Press Rally Extras.” A week before the rally, we received an email from Warren Cohn, an employee of the power lawyers David Schwartz and Bradley Gerstman’s lobbying firm Gotham Government Relations. In part, it read:

We will be on the steps of Brooklyn Borough Hall next Thursday, January 10th at 12 PM (noon) for a little less than an hour. This event is for the same client [as a previous rally in December], Access to the Arts, which is protesting the fact that Time Warner Cable is taking away the arts channel, Ovation TV Network.

The job will once again be to stand behind elected officials and cheer, hold signs, be enthusiastic. If you have already worked the previous event then the rules, payment, instructions, sign-in and EVERYTHING is the same, except location. For those of you that have not participated in the past, this is a very easy and quick job. This client pays $20 an hour for a little less than an hour. All you really have to do is show up and support our rally. We ask that you DO NOT under any circumstances talk to the press or media on our behalf or discuss anything about your attendance or compensation with them.

The little-known cable arts network Ovation TV had recently lost its contract with Time Warner Cable due to low ratings. Now the network was fighting back with online petitions and social media efforts targeting Time Warner Cable. The strategy was to frame their network as a public service of sorts, a way that the less fortunate might expose themselves to high culture. The freshly minted Citizens for Access to the Arts took the argument further, arguing Time Warner Cable was participating in systematic racism.

The truth is that paying protest participants is hardly a rare occurrence. In 1985, responding to an influx of mailers promoting insurance company interests in his district, Senator Lloyd Bentsen (D-Texas) reportedly said, “A fellow from Texas can tell the difference between grassroots and AstroTurf.” He was referring to the difference between an actual, organic uprising among constituents and a manufactured movement often paid for by corporate or other interests to simulate the real thing. The name stuck, and since that time, the term “astroturf” has been used to describe these contrived public campaigns.

The Tea Party may be a movement that blossomed as a result of this kind of corporate astroturfing. A study by the National Cancer Institute found the tobacco industry paid millions to fund free-market oriented “grassroots” groups that were aligned with their interests against cigarette taxes, the Clinton health care plan and the EPA’s findings regarding the dangers of second-hand smoke. Many key players in the Tobacco-funded groups Citizens for a Sound Economy and FreedomWorks went on to play a major role in the formation of the contemporary Tea Party. Likewise, Americans for Prosperity, FreedomWorks, and CSE are funded by the notorious billionaire Koch brothers, who have poured their wealth into causes such as abolishing social security, welfare and public schools.

Fortunately for astroturfers, costly forms of the practice, such as the building of physical crowds, are less necessary today now that so much of the public sphere has moved online. As a result, other forms of message control are blooming. Wikipedia is targeted by politicians, corporations and SEO advertisers desperate to improve their images on a neutral but participatory platform. The regularity of these editing campaigns can even be used to predict political appointments or running mates. Consumer input sites like Yelp, TripAdvisor and Amazon are also constantly influenced by the businesses advertised, sometimes with humorous results. Writing favorable reviews for businesses on these sites is another job you can find online. Reddit has seen its share of manipulation, from sock-puppet accounts that accumulate large amounts of “karma” and then are sold to the highest bidder, or viral marketing schemes like this recent Olive Garden receipt controversy.

Even journalists, who should be aware of such deceptions, often play into the narrative. One article depicting the rally I attended referred to us as “protesters from the community.” Journalists can be similarly manipulated to cover events by being offered free perks like travel and hotel rooms to sponsored conferences like SXSW in Austin or the Mobile World Conference in Barcelona in exchange for blogosphere buzz.

Reflecting on the Citizens for Access to the Arts rally, some might surmise that, despite the group’s name, it really had nothing to do with art. Lieber, the organizer, is a businessman and political insider who was spinning a private concern for personal and political capital. But another way to look at it is that he and his associates are artists working in the high-modernist medium of the crowd. In this sense, the rally was indeed about the arts — it was, itself, a piece of performance art in which politics and business blended and became indistinguishable.

A.M. Gittlitz is a fiction writer, essayist and bike delivery boy living in Brooklyn, New York. He formerly wrote for Arthur Magazine blog, and a contributer to Death Panel Press and Modulo Magazine.