Society has come a long way toward accepting gay marriage. Could the same ever be true for my polygamous family? 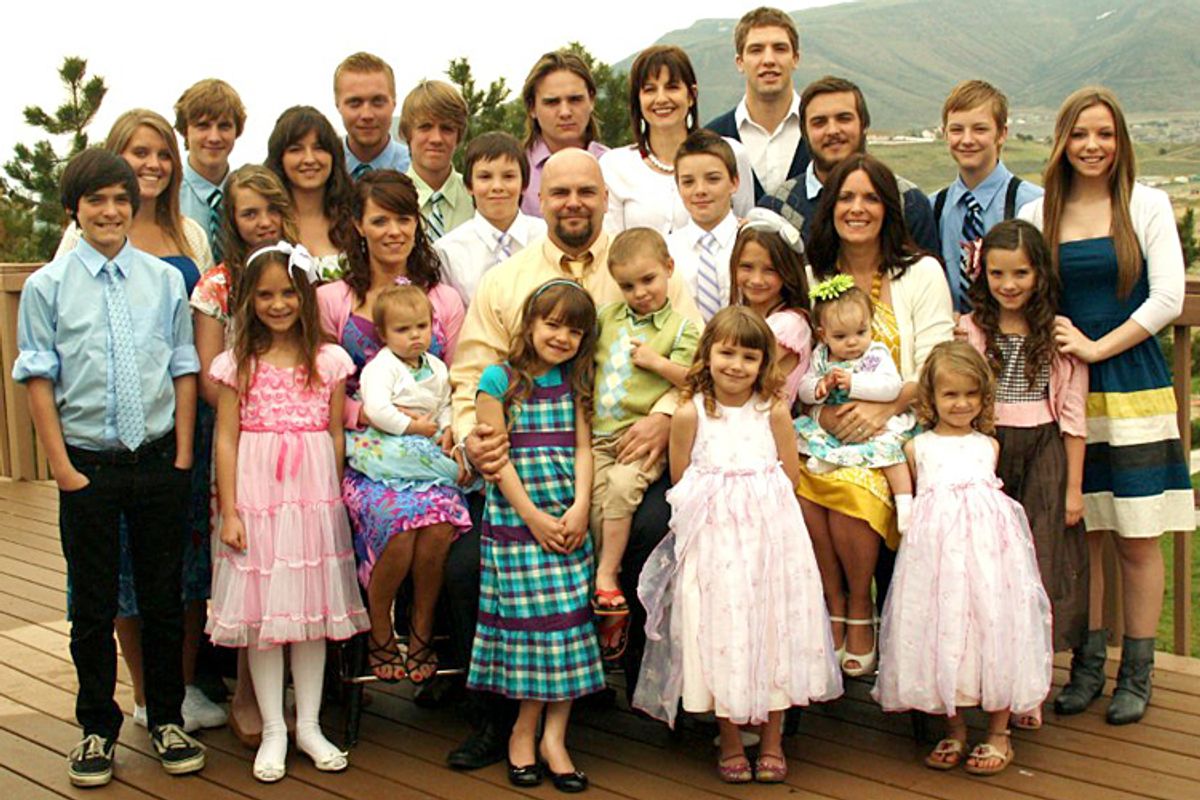 Photo of author with his three wives and 24 children
--

Lately, the debate about gay marriage has led to many conversations about what makes a marriage and who can have one. It’s an interesting question for me because I’m married to three women. I’ve written a book about our family, and my wives have appeared on "Oprah." We weren’t always this open; for years we lived in secrecy and shame – afraid that people would find out, afraid of losing jobs and friendships. But we grew tired of the silence, and it became our mission to help people understand our way of life. Recent stories have wondered if the acceptance of gay marriage could lead to a better understanding of polygamy. I don’t know the answer – but I certainly hope so.

Plural marriage, as we call it, has always been a part of my life. From an early age, I understood my family was part of a peculiar group trying to live according to old Mormon ways. Both my grandfathers went to prison for polygamy, and I grew up hearing stories of their sacrifice for the “Principle.” We lived in a middle-class area of Salt Lake City, where most of our neighbors were mainstream Mormons (the church banned polygamy more than 100 years ago), and church representatives would show up and try to convert my father. All he had to say was “polygamy,” and they were gone.

At the time, my dad only had one wife, but everyone knew we were different because we didn’t attend Sunday services at the local LDS Church. When I was 13, my dad took a second wife -- and I really started to feel like an alien. Some neighbors refused to let their children come to our house or play with us. In time, we were no longer welcomed at church functions. I entered junior high scared that my friends would find out. I was always ready for a fight to protect myself from rude comments.

On the rare occasions someone saw my other mom, she was my “aunt.” I never invited friends over or talked about my family until I was sure I could trust them. I figured if I stayed cool enough and popular enough, I could keep the secret hidden. In high school, I was captain of the football team and wrestled on the varsity team. I still wasn’t sure I wanted a plural marriage, though. I wasn’t convinced it was right for me.

During the summer of 1987, I noticed two girls always hanging around together. Vicki and Alina were cousins, raised in plural families, and they often “happened” to show up at my family gatherings. It became clear that both of them were interested in me. Rather than compete for my attention, they joined forces and pursued me as a team. When I realized they were willing to date me at the same time, with the possibility of a plural marriage, I was scared. I had college in front of me. I knew how difficult it could be to court two women at once.

Even in our culture, it was unusual. Men would usually marry one wife, establish a family, and prove themselves before they married a second. I was overwhelmed dealing with the inevitable jealousy and complexities of starting out such a relationship. In addition, we worried about the legal ramifications of making such a step: who to make the legal wife and how to perform the marriage and who to announce it to. What about the jealousy issues? What about the legal ramifications? I prayed for guidance. Ultimately, I knew I would not be happy unless I lived according to my conscience and pursued what I felt to be God’s highest commandments. It would be a challenge, but Vicki, Alina and I were ready for it. We dated for two years, building trust and trying to figure it all out.

Ultimately I fell in love with both of them. I knew I could never choose between them. I loved them each deeply. As consenting adults, we made a choice to start a family together. In 1990, I legally married Alina. I also married Vicki that same day in a religious ceremony that was not recognized by the state. Ten years later, at the urging of Alina and Vicki, I married Vicki’s twin sister Valerie as a third wife.

In the past five years, shows like “Big Love” and “Sister Wives” have helped to humanize relationships like ours. Those shows could have been cheap and exploitative, but they manage to dig into the nuance of the relationships and illustrate how the marriage is about much more than sex, power and control. It’s about family, and ours is complex, each wife bringing her own personality to the dynamic. Vicki is analytical and deliberate. She likes creative dates and needs plenty of quality one-on-one time with me. She’s also the peacemaker. Alina comes from a boisterous family and is strong-willed and assertive. For her, nothing expresses more love than acts of service, such as when I take over her Sunday breakfast duties when she isn’t feeling well or replace a broken fan in her room without being asked. She is funny, and gets along great with the teens. Val is a great listener. She wants affirmation of my love through physical touch, holding hands, hugs and kisses. I would also add that Val is patient and nurturing in her relationships. Among us, we have 24 children. It’s a big love, all right.

But those two shows also capture the fears and challenges faced by plural families: the need for constant hiding, the fear of repercussions at our jobs and from the authorities – all of which we have experienced, too. I worked at a building supply company where I did well, becoming one of the youngest managers in the company to run my own store. But I once lost a lucrative contract because a competitor “outed me.” I was asked to leave a volunteer organization I loved when they discovered my background; it was heartbreaking to be cut loose like that. As a little league coach, my team made it to the championship game year after year. When a new coaching position opened up, I was a front contender. But then came the call: There had been a controversy because of my religious practice. The job would be given to another.

The final straw came in 2001. My 5-month-old daughter Kyra had died at home. An autopsy would reveal she had a heart defect. The state began a routine investigation. But as the investigation dragged on, we became aware that our polygamous family name brought us into suspicion. Did they think we were religious extremists? Or that we neglected her medical care? Alina had a lot of self doubts, but we knew we were not guilty of anything they were alleging except polygamy, which we never did admit to them, either.

An investigator from Child Protective Services came to our house and questioned our children about how they were disciplined, if they felt safe at home and if they ever went to the doctor. Our children are happy and well-adjusted; they play sports and take music lessons, just like other children, and it was unthinkable that we would do anything to harm any of them. It took three agonizing months for child services to close the case.

I was angry and vowed to do everything in my power to save other plural families from going through that pain. Kyra’s death would not be in vain.

I could see that fear and ignorance were the enemy. So I began to meet with state agencies to help them understand what plural families really were like. I joined a non-profit advocacy group called Utah Children. That led to an invitation to serve on Utah Children’s Polygamy Study Group subcommittee. I also visited editorial boards of several Utah newspapers to convince them to stop painting polygamists with a broad brush. All my life, my motto had been “neither confirm nor deny.” It felt good to be open. My wives and I continued to work behind the scenes -- educating social workers, state agencies and police officers about our culture and moving toward decriminalization of polygamy. We were making good progress.

Then, in 2006, Warren Jeffs, the leader of the FLDS church that practices polygamy, was placed on the FBI’s "Ten Most Wanted" list. I watched with abhorrence as his brand of forced religion – his child brides and abuse – came to define my faith and my family.

I knew we needed to give our own side of the story, but legal threats loomed. Vicki, Alina and Valerie agreed to interviews on "Larry King Live" and "Oprah" using aliases, but I stayed in the shadows. Simply purporting to be married to Vicki and Valerie is a third-degree felony in Utah. It’s more serious in state code than an assault, lewdness involving a child, negligent homicide, DUI with injury and theft -- all of which are class-A misdemeanors.

Living with the constant threat of prosecution has created terrible isolation and fear in polygamous communities. I believe that fear of government allowed someone like Jeffs to use the law as a tool to manipulate others into silence.

Eventually, I’d had enough. In the fall of 2011, we published a book, “Love Times Three: Our True Story of a Polygamous Marriage.” There was no going back. The story of my three wives and 24 children was public information. That moment was both terrifying and liberating. I could not control what people thought of me, but I no longer could allow fear to dictate how I behaved. I could declare my true self without hiding. It was a revelation.

And now, the gay marriage debate has turned the spotlight back on us. It’s been fascinating to watch both sides strike out against polygamy. Some conservatives argue against gay marriage because it could be a “slippery slope” to polygamy -- therefore abandoning their platform of limited government and calling for yet another law of government intervention. On the opposite side of the aisle, many liberals call for acceptance of gay marriage but claim that polygamy cannot be good for women and their rights, therefore it should remain illegal -- thus abandoning their belief in a woman’s right to choose.

As for me, I just don’t want anyone telling me who I can or cannot love. Nor do I want to dictate that for someone else. Perhaps injecting government into the business of marriage is what is wrong in the first place. That is why I won’t be petitioning them for a marriage license, but I will continue to petition them for decriminalization, my freedoms and full rights as a citizen.

I respect any consenting adult’s right to marry whomever they want. Can you ever respect mine?

Joe Darger is the co-author of "Love Times Three: Our True Story Of A Polygamous Marriage." He lives in Salt Lake City with his three wives and has 24 children.