For the beloved American fiction writer, conventional narrative kills the life inside language 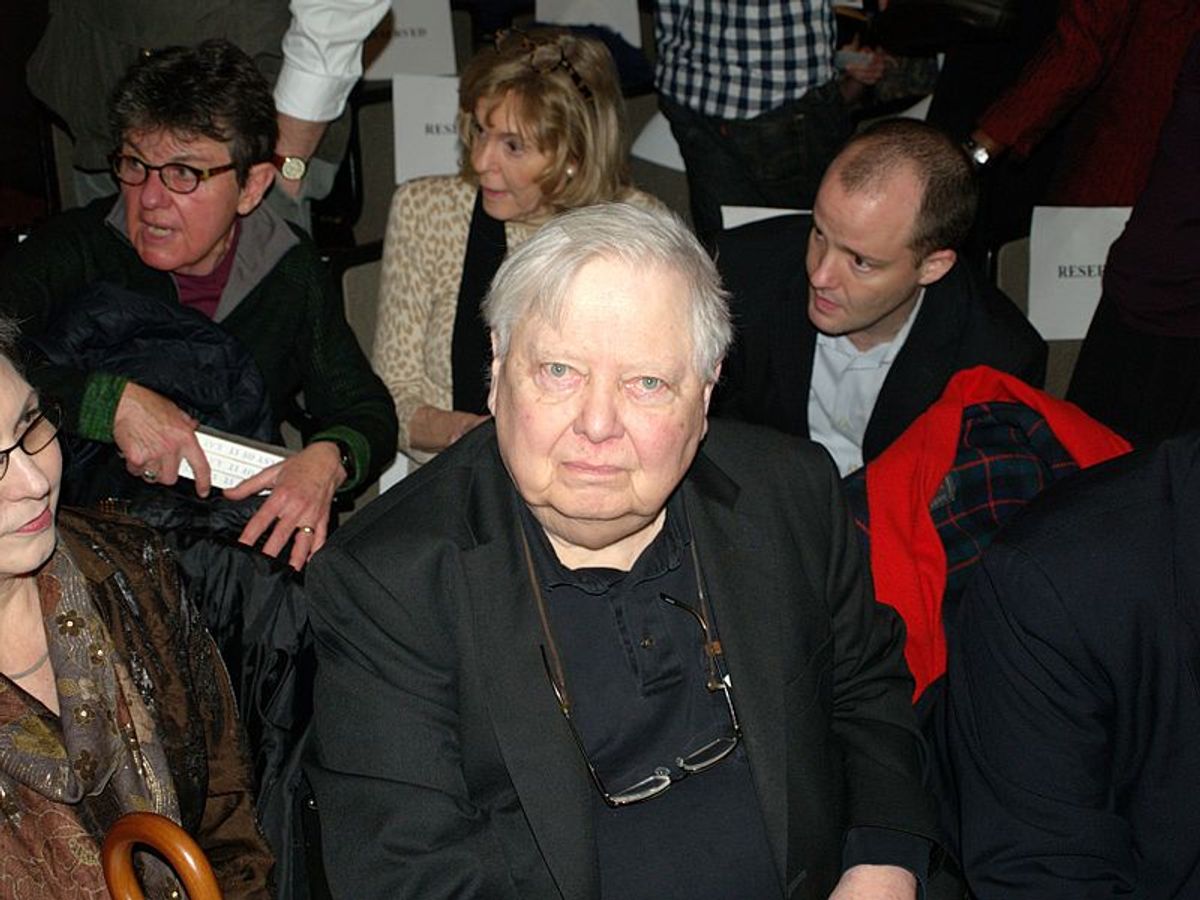 JOHN GARDNER, THE NOVELIST (and author of "On Moral Fiction"), was the first editor to publish Gass — a remarkable novella-length story called “The Pederson Kid,” in Gardener’s magazine, MSS. As the years passed, Gardner went on to call Gass one of his all-time favorites (as did Donald Barthelme and many others), but wished there were more morality pulsing through the veins of his novels and stories. Thank God Gass would have none of that. Thank God that morality for Gass is the ugly truth laid bare, grotesqueries and all, and that simple punishments, happy endings, and “lessons learned” are not suitable for the big reality of his fiction. What he has to say about humanity is communicated not by plot but through the radical vitality and violent inventiveness of his language.

Gass’s relationship to language is at once baroque, modernist, and extremely post-post-everything. He’s bent and invented more words in English than any wordsmith I can think of. His "On Being Blue," a meditation on the color blue, is one of the most unique philosophical poetic riffs in world literature. Gass is so often pure music. You can’t find a single book review or any of his utterances in print where he’s not totally on point, being beautiful and perfect with his prose. Over the course of a 60-year career, his style and big fat word riffing has never dropped, nor has his tonal range narrowed. He can be bawdy, Byzantine, prudish, priggish, sexual, hilarious — “She felt clean as a creamery, of course, but he was sure his sperm could not live inside a womb so under the influence of soap.” — self-effacing, encyclopedic, nursery rhyme-ish:

In the revised and expanded preface to his first collection of stories, "In the Heart of the Heart of the Country and Other Stories," William Gass writes about searching for the better word, since in his mind there always is a better one, and that insistence, that personal demand and writerly pressure, is central to his achievement as a fiction writer and critic. That contract with himself has also influenced several generations of writers. David Foster Wallace comes to mind. But his effect on other writers is not as traceable as the Barthelme-absurdist influence. Gass’s heirs are diffuse, his lineage is less specific, his talents, the full complex rainbow; those who’ve fallen under his spell have also spread far and wide.

Gass emerged from rural Ohio and turned himself into a writer to save his soul from sure destruction. According to Gass, his father was a racist and an anti-Semite, and becoming a writer was a way of discovering the opposite, the path toward mental freedom and a means of understanding the world. “Good little clerk, my father hated workers, blacks, and Jews, the way he expected women to hate worms.” But those ugly childhood years set the table for a lifetime of literary examination.

Life-long readers of Gass know this: the man has never written a sentence that isn’t astonishing. He has the humility, scope, and all-embraciveness of Montaigne, the promiscuity of Bataille, and he is a despiser of plots. Conventional narrative is like rat poison to Gass. Not in my house, not on my page has always been his wide postmodern stance. Conventional narrative, to him, is the great stifler. It sends the wrong message to the world, of rigidity and unpleasant imposed order, manipulative hygiene that smells like ammonia. For Gass, conventional narrative kills the life inside language.

Gass has divided his publishing life between the divine small press Dalkey Archive and big honcho Knopf, and he is one of the few major league writers who regularly traffics back and forth like that, between little and large publishers. Why? Because the big houses are not comfortable giving the writer total control, because they think they know better, because they retch at the word “novella,” a form Gass quite likes. A short story longer than 30 pages. What’s that? It’s a thing from outer space.

Beginning with his earliest fiction and continued into his magnum opus, "The Tunnel," narrative complexity and wild word play are always on tap, 24/7. In his latest novel, "Middle C," Gass continues blasting forward in experimentation-land. "Middle C" features a family with a patriarch named Rudi, a fiddler from Graz, who decides to rename himself Yankel Fixel; his wife Nita shifts to the name Miriam. They extract themselves from Austria before World War II, move to England, and pretend to be Jewish. Good timing for that mock-conversion. Their goal is to rid themselves of all Austrianess, something Thomas Bernhard would have fully understood, having spent his entire literary life comically hating all things Austrian. For Rudi/Yankel to have any shred of Austrianness in him is to somehow tolerate the barbaric acts of killers and general mayhem and massacre of the war. Yankel insists that their son, Joseph, or Joey, the central protagonist of "Middle C," be born in London. There, Yankel changes into Raymond Scofield, a man keenly interested in Gilbert and Sullivan — and, in the blink of a page, abandons his family, acquires an improvised passport and papers in an effort to reinvent himself in Canada. A lot of odd amusing things occur before the real story begins.

The novels leaps once again, from London under siege to Urichstown, a lonely little town in Ohio, the new Germany. He attends Augsberg College, where he meets the humor-deprived Gunter Luthardt — i.e., Austria right back in your face, minus the mayhem — and later bluffs his way into a position as music professor at Whittlebauer College, the institute of high learning where Joey, now Professor Joseph Skizzen, throws his uncertain weight around in a small world of incompetent, amateur music people. These flip metamorphoses are quick and seamless and set Skizzen on a life path of perpetual close calls, where he does everything he can to seem as Viennese as possible. Americans are gullible and Skizzen succeeds, though just barely.

The name Skizzen evokes friction and the sound of rubber tire burns on asphalt, of a bottled-up mind, poised for rupture, division, a crack in the road. Joseph is a nervous, insecure teacher, an ostensible Schoenberg scholar with Schubert and Tchaikovsky on his mind, compelled to coach himself out of fear of the classroom. He figures out that hurling any aesthetic opinion around is better than nothing. “Late Liszt is as atonal as autumn,” Professor Skizzen observes in his Ohio classroom. Gass takes great pleasure in inventing Skizzen, making him a big patchwork fraud of music theory, never sure of the accuracy of what he is saying, hoping that scowls, pursed lips, and chin rubbing count for something in the direction of heavy thinking. He discovers snobbery as his greatest tool and how wonderfully it works on everyone around him.

Herr Skizzen’s real curiosities lie inside his own house, where he produces a museum of his own, devoted to the world’s atrocities, which he calls the Inhumanity Museum, and which occupies the entire third floor:

Although he was, himself, in no hurry to advertise the existence of the Inhumanity Museum, in case of death or injury he might change his mind and allow a few special friends and respected visitors limited access. All of his careful notes, literally hundreds, were on small, easily filed, but not easily copied, cards.

Some of Gass’s darkest humor appears in the passages about the museum. Its walls become crowded with grim information on war crimes, ethnic cleansing, rigged elections, and general human cruelty. It’s a conceptual artist’s atrocity installation: scenes of staged violence and film stills from snuff films, mass killings in 416 BCE, the Athenian decimation of the male population of Melos Island, Genghis Khan’s mass murders, the My Lai Massacre retold, and much rumination on Nazism. There are also bad reproductions of Goya, Grunewald, and Grosz. There are news clippings of seal cubs as they’re being beaten. Flypaper hangs from the ceiling with little horror attachments, brushing Joseph’s ears as he walks by. The full horror blend: I wouldn’t be surprised if a lifted version of this room appeared in the next Whitney Biennial.

Gass’s abhorrence for plot does not extend toward his interest in character. He doesn’t enjoy or practice the art or arch of character development so much as craft character disintegration, and in "Middle C," his lead man spirals into dust.

When language-sensitive readers talk about high water marks in literature, they invariably cite poetry as being the true form for words used at their best; William Gass, the fiction writer, has always demonstrated that the world of sentences and paragraphs — prose writing, stories, and novels — is equally adept at gem creation, and Gass himself is the top beauty dog.

“Literature once held families together better than quarreling,” Gass wrote in the introduction to "In the Heart of the Heart of the Country." Robert Frost said he had a lover’s quarrel with the world, and yes, quarreling is clearly in a writer’s job description. Gass’s literature lays bare the truth that quarreling with oneself — and the world and the reader and with the way we tell stories — is what great literature is made of.

Benjamin Weissman is the author of a book of short fiction entitled "Dear Dead Person." He lives in Los Angeles.