A Missouri town where teachers carry guns and parents approve

The staff provide their own guns, and must pass annual drug and mental health evaluations to carry at school 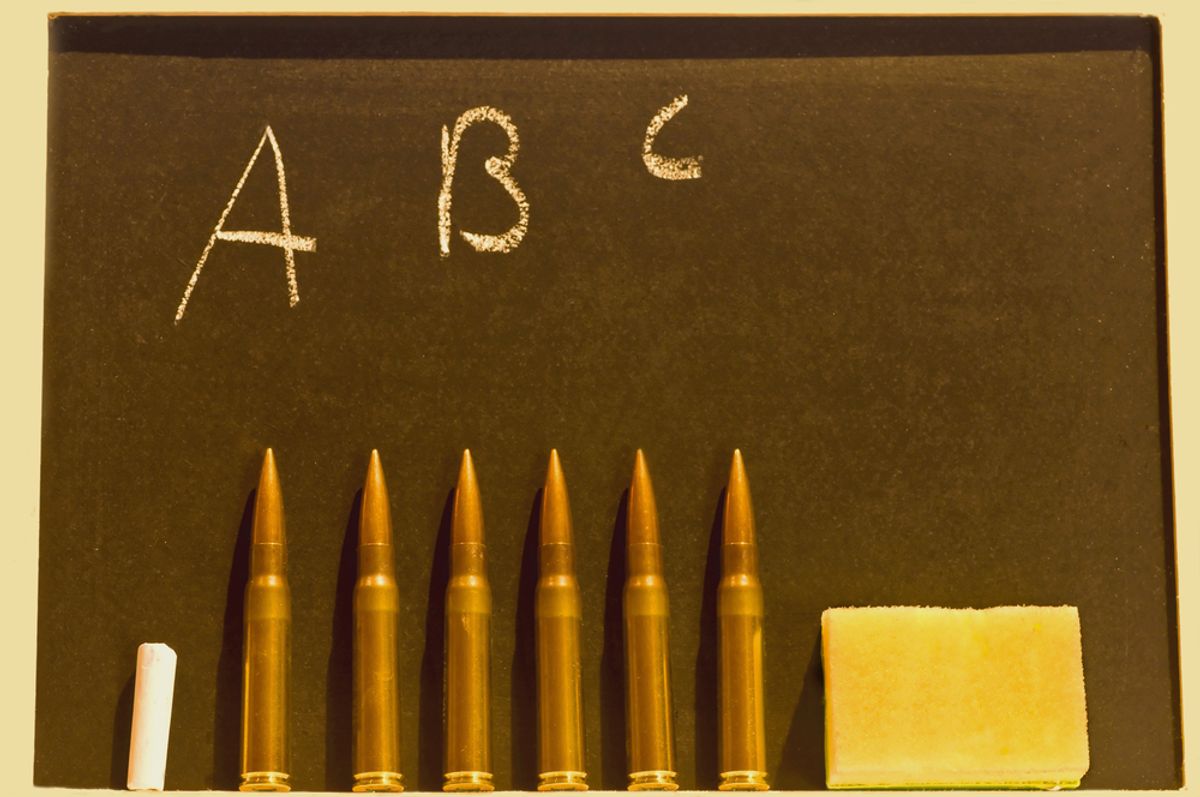 As the result of a new administrative policy, staff at Fairview School in West Plains, Mo., have been trained to carry concealed weapons, to the delight of many local parents. In order to carry a gun at the school, which runs from kindergarten through eighth grade, a group of Fairview employees underwent a 40-hour training course administered by a private security company. The staff, who provide their own firearms, must pass annual background, drug and mental health evaluations to maintain their carry license.

“Sooo very glad to hear this,” a woman whose grandchildren attend the school wrote in response to a local newspaper report touting the new policy, adding, “All schools in America should do this.”

As The New York Times reports, arming teachers didn't cause a stir in West Plains, a community "in which the idea of guns in classrooms is not necessarily intimidating":

By the time they are 6, many young boys and girls already have learned how to safely handle a weapon and have shot their first deer. Some live in homes where guns are not under lock and key, or on vast prairies where they shoot skeet with their families.

Sherri Roy, who has four children at the school, said in an interview that she “was really pleased” that some staff members were armed.

“If I didn’t know anything about guns, if I wasn’t raised with it, I’m sure I would be more uncomfortable,” she said. “But in this area guns are pretty much a normal, everyday part of your life.”

But parents and school officials haven't uniformly cheered the policy. “I was really upset more about the way it happened, the back door,” Eileen Wilson, a Fairview parent, told the Times. Wilson was also angry that the school informed parents of the decision through a press release, rather than a public meeting where it could be debated: “I just don’t think something of this magnitude is something you just put out in a press release. ‘Oh, by the way, we got 10 people packing weapons now in school.’”

And in rural communities near West Plains, administrators have called the idea dangerous, choosing instead to increase security at school entrances and other safety measures.

“Traditionally in this area, schools have already been a very safe and welcoming community,” Karen Moffis, principal of a nearby school, told the Times, adding: “Nobody’s ever thought about needing that kind of thing at school.”

But Fairview officials insist the decision has been met with little controversy, and that arming their staff is just a part of the school's overall safety initiative. The teachers, it seems, are adjusting, too. As one armed staff member told the Times: “You put your pants on, you put your belt on, that’s just what you do. Nothing awkward about it at all. I’ve been hugged many times before and since, and it’s never been any kind of an issue or question.