After Boston explosions, a scapegoat emerges on the right

Following the New York Post's lead, a belief is affirmed: The Boston explosions must have been done by Muslims 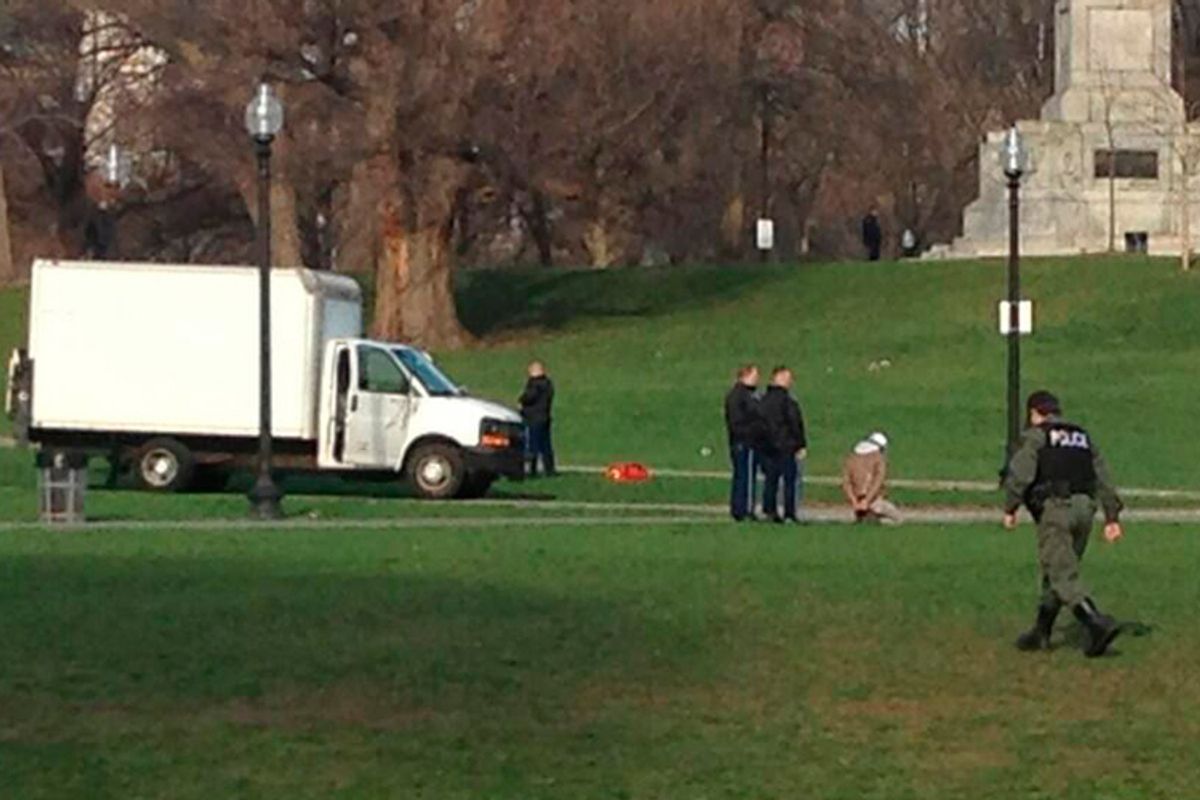 A report alleged that a Saudi suspect was in custody. (Reuters/Eric Twardzik)
--

Should we even be surprised that after an event like the bombing of the Boston Marathon today, immediate suspicion would turn to Muslims? Muslims themselves were not. “The thought of every Muslim right now," tweeted Dubai-based Al-Aan TV journalist Jenan Moussa: “Please don’t be a ‘Muslim.'”

It's easiest to explain unexplainable -- or yet unknown -- things by forcing them into an existing worldview, so when a shred of evidence came along, such as an unsubstantiated New York Post report that police had detained a Saudi national, many on the right immediately took it and ran with it.

Of course, the Post's report -- which Fox News picked up -- has zero named sources, zero quotes, and was contradicted by the Boston commissioner, who said authorities have no suspects in custody yet, but why let that get in the way of what you're sure is true.

As if to anticipate such a meme spreading, every major Muslim group in America sent out press releases condemning the attacks and offering their sympathy, something no other racial or religious group is expected to do after such events (though many do). “American Muslims, like Americans of all backgrounds, condemn in the strongest possible terms today's cowardly bomb attack on participants and spectators of the Boston Marathon," CAIR executive director Nihad Awad said in a statement.

But that didn't stop the speculation, and not just from people like Pamela Geller or Fox News regular Erik Rush. Or Bryan Fischer, who said on Twitter, "NBC: suspect a student who was here on a student visa. Anybody want to rethink Muslim immigration?" These people have made careers peddling inflammatory rhetoric. If Pam Geller didn't immediately blame Muslims, it might be a good idea to send someone over to make sure she's feeling OK.

But what's notable were the people just beyond the committed fringe who were quick to jump in at the first provocation. "Muslim" is now trending on Twitter, for instance. Then there's Daily Caller White Correspondent Neil Munro, who played out the fantasy. Under a picture of the 9/11 hijackers, he noted that "the United States has had tragic experience with Saudi jihadists" and helpfully explained that "Saudi Arabia’s population is entirely Muslim." He even explored the potential policy fallout, writing it could lead to action on the U.S. travel policy toward that country, which was recently relaxed.

This isn't new by any means. After the Oklahoma City bombing (which happened on the same holiday, Patriots' Day, almost two decades ago), CNN identified four Arab Americans in connection with the bombing, who later all turned out to be innocent, of course. CBS interviewed Steven Emerson, a controversial self-styled Islam expert who throws in the Gellers of the world. And that should be a note of caution to anyone trying to jump to conclusions now.

That includes the Alex Jones set, now joined by former congresswoman Cynthia McKinney, who see the attack as an inside job, but they will be laughed out of town and never taken seriously.

On the left, a theory of its own was hatched, with more than a few whispering about the possibility of right-wing extremists (as was the case with the Oklahoma City bombing). Monday, after all, is Patriots' Day, an important day on the fringe right, as well as Tax Day. But few liberals would actually articulate this notion, knowing that if they did, they'd get pilloried for it. A CNN correspondent incurred the wrath of the right-wing blogosphere for even mentioning it as a possibility along with other possible perpetrators.

But while the Alex Joneses of the world will be mocked, and anyone who even mentions the possibility of right-wing terrorism will be run out of town, the people who are ready to blame the Muslims yet again seem to see little incentive to stop.