After my report on soy company's anti-birth control agenda, its CEO calls to talk Obama, abortion and contraception 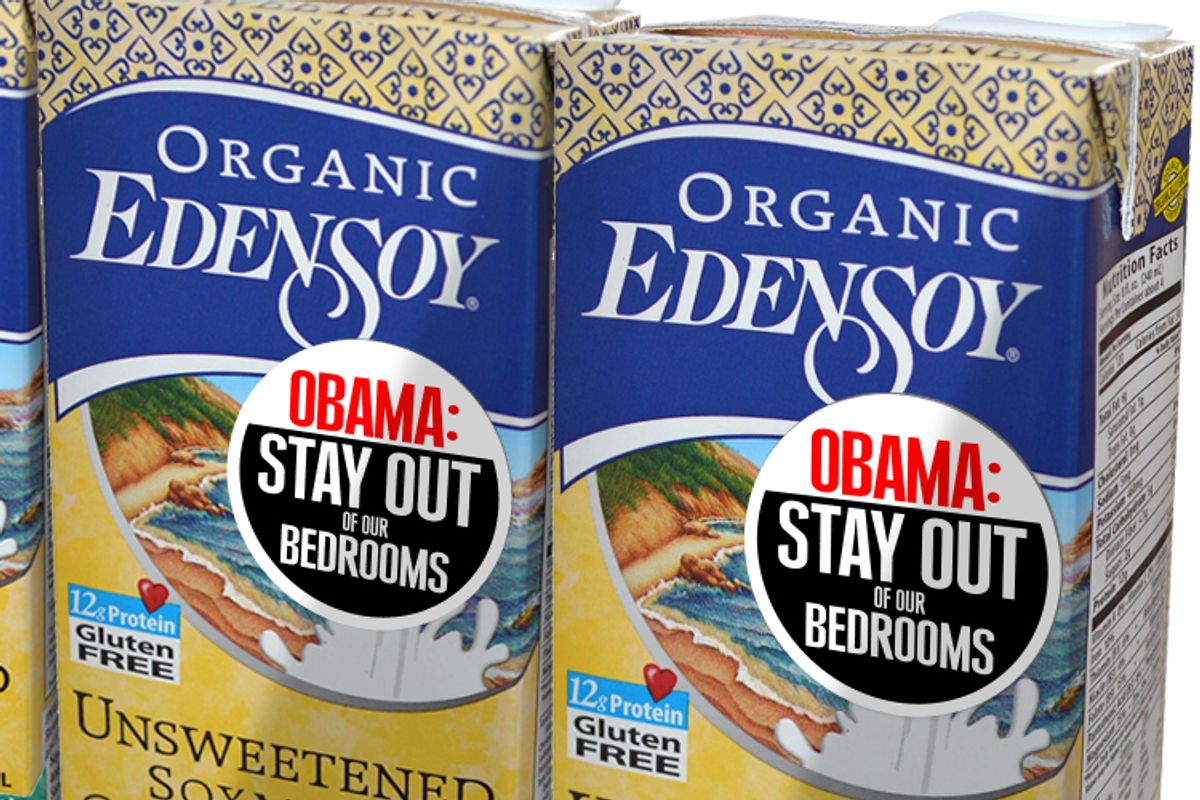 "I've got more interest in good quality long underwear than I have in birth control pills," the unfamiliar voice on the phone said to me.

It was Michael Potter, the Eden Foods founder and CEO. He was calling to respond to my Salon report from last week, which revealed that his organic food company -- which markets itself to a crunchy, liberal crowd -- was quietly suing the Obama administration over its requirement that his company's employee health plan cover birth control. Mostly, he said in the most amiable, avowedly Midwestern way imaginable -- at one point he called himself "a pretty simple guy, a Midwestern homemade-soup guy" -- he was calling to apologize to me.

It wasn't that he was upset about my reporting or what his company was doing. He was just sorry my request for comment had gone unanswered due to an oversight. I accepted the apology, and asked why he said he didn't care about birth control, since he filed a suit about it and all.

"Because I'm a man, number one and it's really none of my business what women do," Potter said. So, then, why bother suing? "Because I don't care if the federal government is telling me to buy my employees Jack Daniel's or birth control. What gives them the right to tell me that I have to do that? That's my issue, that's what I object to, and that's the beginning and end of the story." He added, "I'm not trying to get birth control out of Rite Aid or Wal-Mart, but don't tell me I gotta pay for it."

But the federal government tells him to do a lot of things, I said. Why sue over this if he had no particular issue with contraception, as the suit -- “these procedures almost always involve immoral and unnatural practices,” his court filing explained -- clearly alleges he does out of religious conviction? Well, he said, he opposes "using abortion as birth control, definitely." But the mandate doesn't cover abortion, I reminded him, only contraception, and emergency contraception is not abortion.

"It's a morass," Potter said. "I'm not an expert in anything. I'm not the pope. I'm in the food business. I'm qualified to have opinions about that and not issues that are purely women's issues. I am qualified to have an opinion about what health insurance I pay for."

I floated by him the fact that contraceptive coverage is cheaper to pay for than, say, maternity coverage.

Potter replied, "One's got a little more warmth and fuzziness to it than the other, for crying out loud."

I asked him what he was hearing from customers about the lawsuit. "As you can imagine we're getting a lot of feedback," Potter said delicately. Indeed, since the story, Eden Foods' Facebook page has been inundated with complaints and boycott declarations. "Your company's unfair, judgmental and misogynistic treatment of your employees has lost you yet another customer," was a typical comment.

He did sound annoyed to be receiving emails telling him to stay out of people's bedrooms. "I'm not in your bedroom," he clarified. "Obama's in your bedroom."

Did he worry about the impact on his bottom line? "Oh my god," he said, "from what we've seen the last couple of days, it's a big deal."

But he isn't prepared to back off. "I worked my ass off at figuring out what to do on it. I worked hard on it and I made a decision," he said. "The federal government has no right to do what they've done. No constitutional right, no standing." Apparently, his apology only goes so far.