Her obsession with weight

As my grandmother faded, I struggled not to blame her for the body issues I inherited, the ones she never overcame 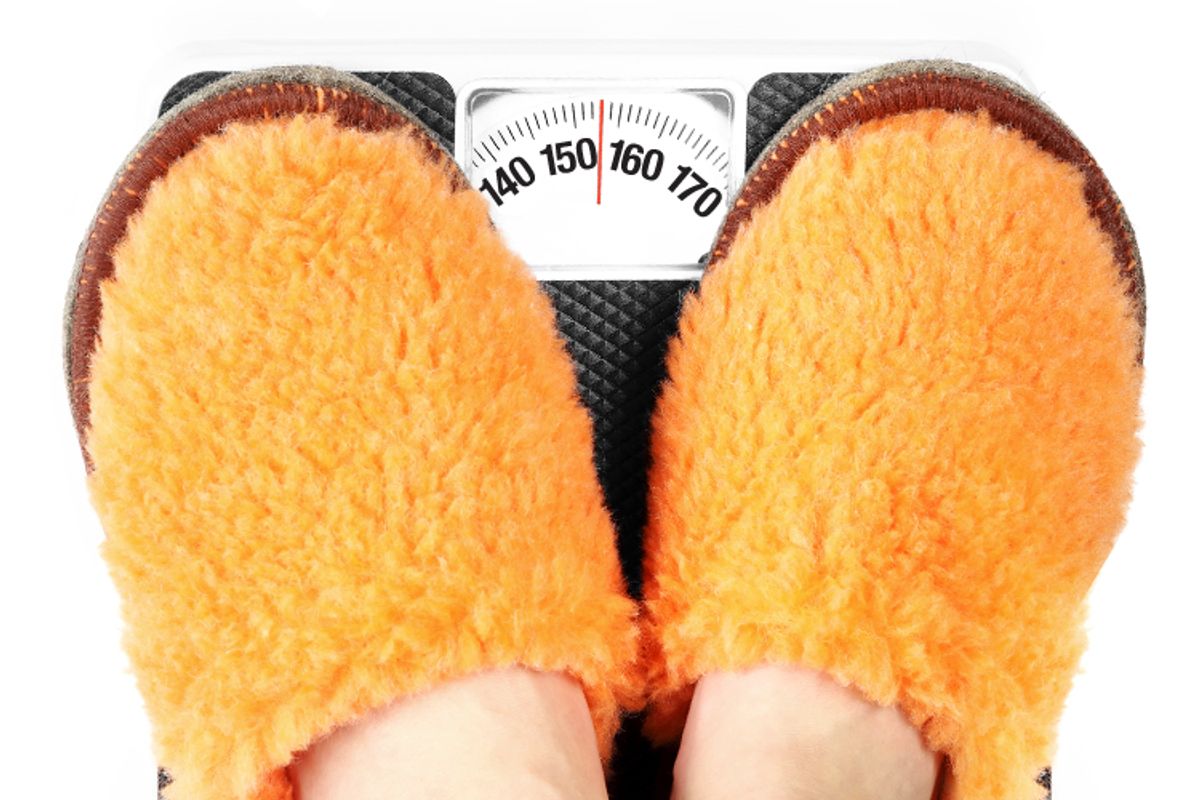 My grandmother was diagnosed with cancer when she was 85, but it progressed slowly — everything does at that age, the doctors said — and it wasn’t for five more years that family started descending on her home in Santa Monica, Calif., to say goodbye.

I flew across the country and found her in what had once been called the music room, where she started sleeping once it became too difficult to climb the stairs. The cocktail bar was filled with her clothes and other necessities — diapers, a walker, a bedpan. The bed was where the piano used to be. I went over and took her hand. The skin on her face was sunken down around the bones and the skin on her arms fell off her in loose folds. “You look so thin,” I said.

“I know, darling,” she said, breathing raggedly. “Isn’t it wonderful?”

I was 19 when I started associating my worth with weight. It was summer, and I was living in my grandparents’ rickety beach house in Cape Cod.

I moved there in June knowing it was a place I could live rent-free while I tried to avoid the final machinations of my parents’ divorce. Technically their split had been a little over a year in the making, but in actuality things had started unraveling much earlier. By the time they made the decision to separate, a month after I moved out, their lives were in such personal disarray that I only found out when I called home on my 18th birthday. Offhandedly, my mother mentioned that my dad had found the new apartment he’d been looking for.

My grandparents' house had four bedrooms, but I opted instead to sleep on a makeshift couch in an enclosed porch on the second floor. For the first month I lived there alone, so there was no one to keep me from gradually neatening the mess of my mind into a solitary goal. I would lie on the porch at night, going over everything I’d eaten that day, the exercise I had done, the weight I had lost. And then I would lie there in the morning, going over everything I planned to eat that day, the exercise I would do, the weight I would lose. It was incredibly clean to be so purely devoted to one purpose, or at least this was how it felt. Though it’s now clear I didn’t really know much about how I felt. The noises of that summer, crows cawing, for example, which they did for about an hour just after dawn, still bring back a visceral experience of that time, but it took me years to even recognize the feeling for what it was — loneliness.

I was working as a waitress at a diner, a one-room building with 10 tables and an American flag by the entrance. My shift started at sunrise. Early in the morning local fishermen would sit around drinking coffee, leaving me quarters for tips. Later in the day came the tourists, the tanned college kids working as lifeguards and the wealthier families in their worn Lacoste shirts. All of them filled up my notepad with such a lengthy succession of eggs over easy and omelets “hard!!” and whole wheat toast “DRY” that by the time my shift was over, at 1:30, I would have managed to eat next to nothing since 6 a.m. that morning, if it was a good day, even while my head remained filled, constantly, with food.

Breakfast was oatmeal, after work I had a coffee, dinner was chicken and a vegetable. I remember pretty much everything I ate that summer because I consumed the same thing at almost every meal. Occasionally I’d let myself drink a blueberry smoothie during my shift, and one day the chef found it stashed away behind the orange juice. Before he’d stopped drinking he’d been in the Hell’s Angels and he was gruff, but with a clear-eyed intuition. “That girl’s got a lot of things figured out,” I heard him say to the line cook. “But there’s one thing she doesn’t understand — nobody’s gonna love her more if she’s skinny.”

He was right, and part of me knew it. But the thought skimmed across the surface of my mind without sinking in. I still have trouble accepting that idea, when you get down to the bones of things, although it no longer has the power over me that it used to. And I blamed this, squarely, on my grandmother.

As long as I could remember, my grandmother had wanted to be skinnier. You could count on it, just like you could count on her insatiable curiosity and her ability to charm anyone with her stories. There was the one about the time her mother won every raffle at the county fair and they drove away in the new Cadillac with the basket of fruit on the front seat and the new dress hanging in the back. Or the one about the time she discovered that if she dropped down on all fours, the stutter she had as a young woman disappeared. Many of these had a tinge of magic to them and reflected an understated amusement at the state of things that, in moments, I recognized in myself.

But there were other kinds of stories, too, about how fat she was as a child, or about the diet her mother was on, which she then took up, following the nutritional recommendations, the calisthenics, until she lost weight and felt pretty for the first time in her life, which was right about when my grandfather proposed. And these, too, planted assumptions that carried down through the generations, ideas I didn’t even know I had until years later, living alone in a big creaky house that let the wind in at night, my parents in the middle of a divorce.

As my grandmother got older, she gained back the weight she lost as a young woman, and she talked frequently about how much more grandfather liked her when she was thinner. “But how do you know that?” I would ask, trying to comfort her. “He told me,” she would claim, like it was a talisman she had never ceased to believe in. Yet whatever she was grappling with had little to do with him.

When I was 26 and living in Wyoming, she visited me, and I took her to the county fair. My grandfather had died three years earlier and at 88 my grandmother was traveling across the country accompanied only by a friend, a younger man she’d fallen for in a way I didn’t realize was possible past 14. He didn’t reciprocate her feelings, and at some point when my grandmother and I were alone she told me about his girlfriend, of whom she was very jealous. “She’s very thin" — this was how she described her.

At the fair she needed to use the bathroom, so I brought her to the industrial barn where they were held. Eventually I walked in after her, worried because she was taking so long. She’d caught sight of herself in the mirror, it turned out, and locked herself in a stall to cry. When I found her there, my ears still ringing from the tinny noise of the rides, she was consumed with a sadness so potent it felt contagious.

She loved food, though, particularly meat and ice cream, and her feelings about her weight didn’t usually keep her from eating if something she enjoyed was put in front of her. In Cape Cod that summer I baked her and my grandfather dessert after dessert, none of which I touched, taking a perverse pleasure in knowing I could deny myself what she couldn’t.

She did sometimes have a Slimfast shake for lunch, and one afternoon I found her in the kitchen trying to make one. As soon as my cousins and I were old enough we were taught to always help her with whatever she needed, but that day I stayed in the doorway, watching.

Part of what made helping her hard was that her incapableness often felt willful. She grew up with maids and cooks, and never seemed to get used to not having servants.

“Wouldn’t it be lovely if I had some salt?” she would say to no one in particular at the dinner table. She expected to be served and almost always was. When I was a child my extended family spent all of August in Cape Cod, and the summer she had back problems she was given a bell to call one of her granddaughters whenever she needed something. “Slaves!” she would call, ringing the bell, her voice trilling through the thin walls of the house, “Oh, slaves!” She found this very funny. “Dreadfully amusing” is the term she would have used. She spoke like that, with contradictory adjectives mashed up together. Life was terribly wonderful and marvelously awful. People were frightfully interesting.

But even beyond any of that, what kept me planted in that doorway is that I knew what I was doing was destructive and I wanted her to try to help or at least notice something was wrong. Instead she just complained day after day about her own weight. Over a decade later I am still ashamed to admit this, but here it is: She wouldn’t help me, and so I didn’t want to help her in return.

I watched as she reached for the tub of Slimfast in the cabinet. I watched as she put it in the blender with the milk and turned the blender on, without putting her hand on the lid. And I watched as the powdery mixture exploded all over the kitchen. Still, I waited another full beat before going to tell her to lie down while I cleaned it up.

The week she died, the whole family spent time sitting with her. When it was my turn I stroked her tight white curls and rubbed the worry lines between her eyes. Every woman in my family has struggled with her body and sitting there with her it started to feel like maybe whatever had caused all of that had also carved those two lines into my grandmother’s forehead, that underneath it all was just this impossibly vulnerable desire to be loved.

It is ridiculous, being angry with a dying person. Especially when that person and you share the same sense of humor and the same curiosity about strangers. How is it possible to blame someone for anything when you also know that for decades she cried every day at 5 p.m., steady enough to set a clock? When you know her father, sending her off to college, told her the best way she could improve her life would be to lose weight? Yet I still held it against her, as if the way she shaped herself around whatever pain she experienced was her own fault.

A day before she died my cousin Sophia was holding her hand. “You can go now,” she said. “You can let go, leave your body behind.” My grandmother looked up at her. In the last days of her life her eyes always seemed to me like those of a whale, peering out from this great heavy wasted body.

Molly Langmuir is a reporter at New York magazine who has also written for the Village Voice, the Christian Science Monitor and BuzzFeed. She blogs at mollykay.tumblr.com
MORE FROM Molly Langmuir