The shooting death at NRA-sponsored race highlights the gun violence that results in the most fatalities: suicide 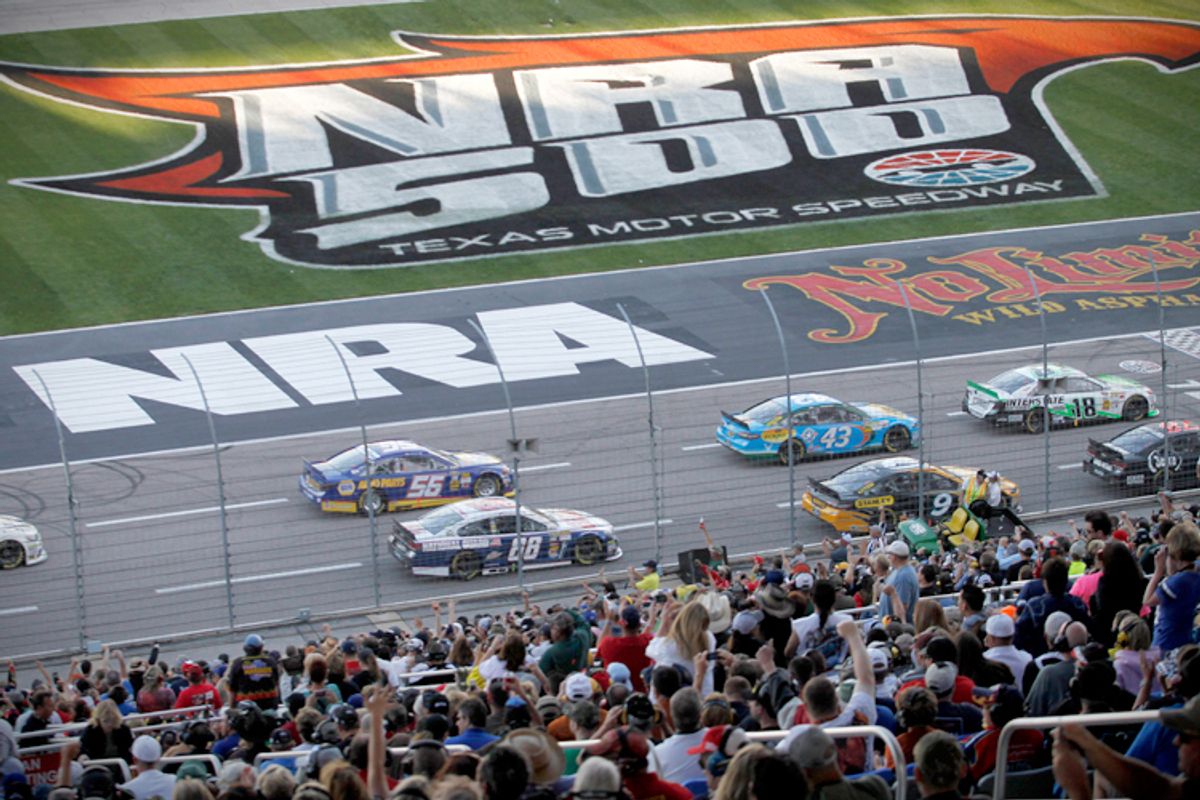 News that a man shot and killed himself at a NASCAR race sponsored by the National Rifle Association Saturday night is sure to launch a thousand columns and politicians' statements making liberal use of the word "irony" -- and rightly so -- but it also underscores a type of gun violence that is the least talked about in Washington but also the most common: suicide.

Here's what we know about the incident: 42-year-old Kirk Franklin was found dead in the infield of the Texas Motor Speedway, where he had been camping. Police say the man died of a “self-inflicted” gunshot wound, apparently after getting into an argument with other campers. Alcohol may have been involved.

Of the more than 32,000 firearm-related deaths in 2011, almost 20,000 -- 62 percent -- were suicides. While horrific mass shootings like the one in Newtown, Conn., provoke national outrage and demands for legislation, they represent less than 1 percent of all gun deaths. It's the kind of quotidian but lethal admixture of mental health issues, interpersonal dispute and the presence of a firearm that is responsible for the majority of all gun deaths in this country.

“Gun suicide is our ‘hidden’ epidemic -- the type of gun violence that results in the most fatalities, yet which is rarely discussed by the media or legislators," Ladd Everitt of the Coalition to Stop Gun Violence told Salon this morning.

"More than anything, Kirk Franklin’s death provides additional proof that the NRA’s ‘guns make us safer’ claim is a cruel lie. In the end, the gun that Franklin brought to the NRA 500 offered him no protection. Instead, in an intense moment of anger or depression, it allowed him to snuff out his own life in an instant—without any recourse to a second chance," he added.

And these suicide attempts need not end in death, gun safety advocates say. Sure, people will find other ways to attempt suicide, but nothing is nearly as deadly as firearms, which are fatal 85 percent of the time they're used in an attempt to take one's life. By contrast, "Many of the most widely used suicide attempt methods have case fatality rates below 5 percent," according to data from the Harvard School of Public Health.

"Easy access to guns by mentally ill people, even if it's temporary insanity like among teenagers, can lead to depression turning into a death," John Rosenthal of Stop Handgun Violence told Salon. "A gun in the home is three to five times more likely to be used against somebody in the home -- in a teenage suicide or a domestic argument turning into a homicide. So many of these deaths are preventable."

Meanwhile, the fact that an interpersonal dispute with some fellow campers, which might otherwise have run its course and been forgotten, became deadly is all too common. Indeed, it's all too common that a domestic or other personal dispute leads to death simply because a firearm was available, as researchers from Johns Hopkins University have explained.