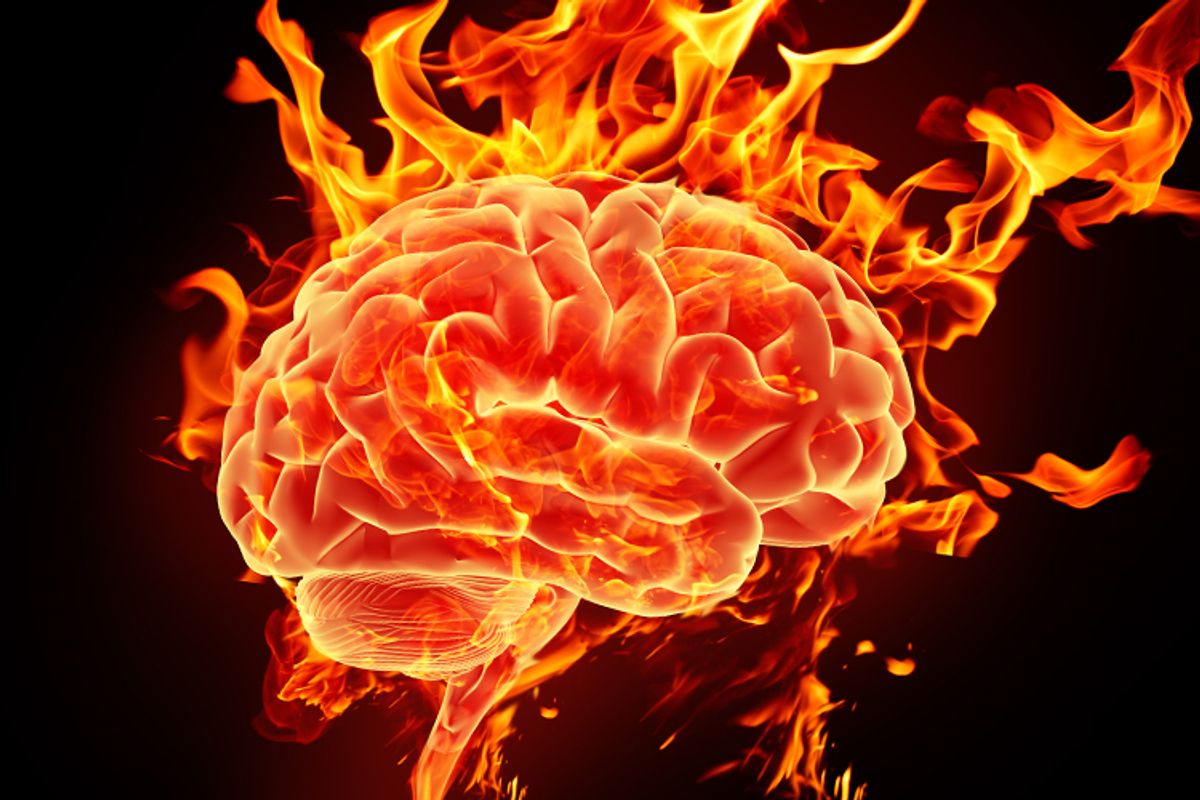 If only we had access to technology that would allow us to accurately map all the brain activity going on at a single moment inside the skull of a particular human. Such technology would allow us to conduct some fun and instructive neuroscience experiments. For example, we could compare the changes in synaptic action in the brains of neuroscientists before and after they read a letter sent April 12 by Larry Swanson, the president of the Society for Neuroscience, to all 42,000 members of his association. (Hat tip to science writer extraordinaire, Ed Yong, for the news.)

BEFORE: Your everyday snapshot of the neurochemical and electrical activity in the brain of a scientist going about her or his normal business. Incredibly complicated, yes, but nothing particularly out of the ordinary.

AFTER: All hell breaks loose! We've got damage reports pouring in from every sector, captain!

In his letter, Swanson addressed the vigorous debate that has taken place among neuroscientists since President Obama recently unveiled his BRAIN initiative, a plan to spend hundreds of millions of dollars a year for ten years on research that would develop technologies that could "uncover new ways to treat, prevent, and cure brain disorders like Alzheimer’s, schizophrenia, autism, epilepsy, and traumatic brain injury." (Such technologies might include, for example, ways to comprehensively map brain activity!) The news has sparked a ton of commentary. Discussants questioned the project's goals, funding structure, marketing, and basic theoretical feasibility. And like good scientists will, they also criticize each other's criticisms.

But in Swanson's view, the debate was a little too vigorous.

While we should all continue to explore and discuss questions about the scientific direction, it is important that our community be perceived as positive about the incredible opportunity represented in the President’s announcement. If we are perceived as unreasonably negative or critical about initial details, we risk smothering the initiative before it gets started.

Oh boy. There is nothing, I mean nothing, that gets a person's neurons spiking wildly like being told that they are "unreasonably negative." The reception to Swanson's letter has not been kind. Justin Kiggins, a Ph.D. student in neuroscience at UC San Diego, captured the mood of many in an open letter to Swanson published on Monday.

Not only do I find it offensive and patronizing that you would ask us to be disingenuous to the very public which supports our efforts, but I think that your request is short-sighted and undermines the work of neuroscientists who seek to cultivate a public that is informed and literate in matters of the brain.

Kiggins included a handful of fascinating links to criticism of BRAIN. I worked my way through all of them, though my expertise in neuroscience is primarily limited to my status as the son of a neuroscientist.

What I discovered was exhilarating: There's a lot going on in neuroscience today. Our understanding of the human brain is constantly expanding, and there are great many research areas that deserve funding. But there's also little consensus on the best way to proceed in tackling an incredibly difficult problem: figuring out how the mind works. So disagreement and criticism of the biggest government research project in neuroscience ever is utterly normal. A lot is riding on targeting the most fruitful avenues of potential exploration. This is the kind of thing you want to get right.

What I saw, basically, was the practice of science: peer review in action, a democratic society doing what it should do best, engage in rigorous debate. If Swanson's fears are realized and the Obama administration and Congress can't handle the truth of informed response, get scared and retreat from the field altogether, well, fine. We might as well just let the Chinese figure it all out, because we'll have proved that we don't have the gumption to get anything big done, anyway.