Organic restaurant ad "jokes" that "beer should be like violence: domestic"

Proof that eating micro-greens is not a cure for stupid 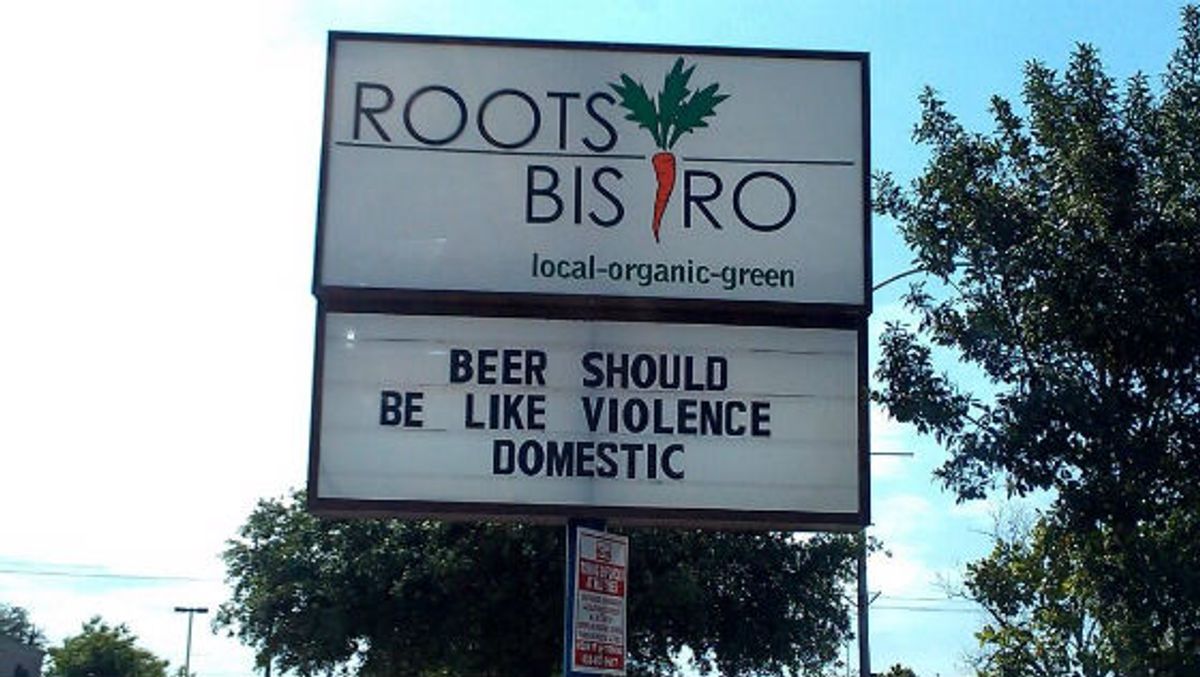 As a Brooklyn resident, I have read my share of ridiculous cafe signboards. ("I drink therefore I am," "Make pie, not war," "Death before decaf," etc.), but this Texas organic restaurant takes the (gluten- and dairy-free) cake.

As reported by the Houston Press, local eatery Roots Bistro posted the tone-deaf message that "Beer should be like violence: domestic" on its marquee this weekend. And while the manager claims the sign was only up for 10 minutes, the "joke" outraged local residents and almost all of  the Internet.

According to the House Press:

When contacted about the sign and its intentions, a manager on duty who identified himself as Kenneth offered the following explanation: "That sign is not up now. It was up literally for 10 minutes and it was pulled down..."

"Obviously no one here would condone any type of violence, domestic or otherwise," Kenneth said, although he couldn't explain why no one thought the sign was tacky, tasteless or offensive until a customer dining on the patio pointed it out...

"Everyone makes mistakes," said Kenneth. "We completely deserved the backlash, and I can't be mad at anyone but myself."

But the next message posted to the marquee didn't exactly sound contrite: "Seriously, focus your energy on equal rights," the new sign read. As in: "Seriously, learn to take a joke, uptight members of the Houston community and Internet."

Like many others, Andrea Greer Texas-based blog Nonsequiteuse wasn't buying the apology, as she told the Press: "The tone of this sign, needless to say, doesn't suggest genuine contrition so much as 'get over it, ladeez, we're just making a joke, so focus on what really matter, 'mkay?'"

Greer added: "I'm pretty sure Roots Bistro has now lost the benefit of doubt with most people who see this."