Sports fandom doesn't have to be miserable

Following our favorite teams can be exhausting, especially when they lose. We can't let it make us boorish or dull 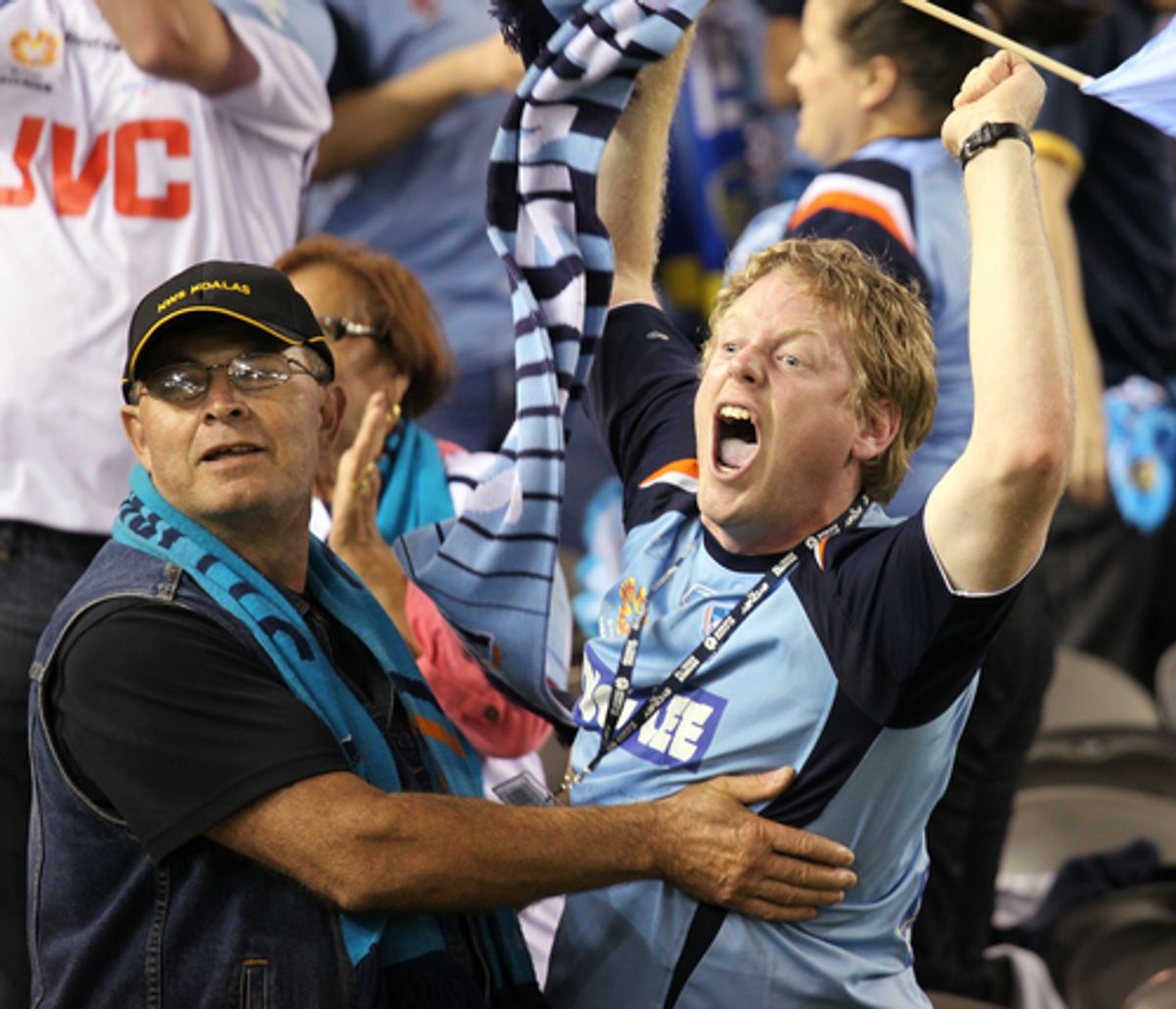 “This really should be the end of it,” someone I wouldn’t exactly call a friend said to me about the Cleveland Cavaliers. “Or something has gone horribly wrong.” He’s talking about, or more accurately issuing ultimatums about, the rebuild through which both the Cavs and their fans have suffered over the past three years. You know the one: LeBron left, team ripped off the longest losing streak in NBA history, Kyrie Irving teleported in from a planet where people believe in themselves but have very vulnerable lower bodies, and that about catches us up. There is reason for hope, but the team is still, at this stage, highly capable of getting blown out by 18 points in Detroit. This means some fans consider Cavs GM Chris Grant to be on the hot seat. They are not the ones whose hands are on the temperature dial, but they are no less certain for that.

I remind my not-friend that he sounds like someone complaining about his government from a couch-bound position. His participation in the process amounts to a pathetic “hey!” at the TV screen while the thing on TV goes on ignoring him. The only crucial difference is that there are legitimate reasons to get angry about, say, the by-fiat deployment of airborne death-robots or, less severely if still annoyingly, Marco Rubio’s douche-chill politicking. Chiding an NBA GM is wholly useless, especially from a seat in a bar and far from that GM. That is, unless you like to get righteous about trivial things, which is to say unless you’re like a lot of people, present company lamentably included. There’s no question, really, about what all this huffing and puffing means, or its sum or effect. Nothing, nothing and nothing. It’s not about that. It’s about wanting to be right.

The human proclivity for wanting to be right—to be told that we’re right, to tell others that we’re right, to believe it in the face of any other thing—is the backbone of sports talk radio and comment sections; the internet in general has made it deafeningly, drearily clear that people will dedicate large stretches of time to explaining how they are right about things. For their trouble, they receive nothing except a fleeting sense of superiority and, if everything breaks right, whatever dull rush comes when one of your tweets gets aggregated by Buzzfeed. There’s a little bit of affirmation, maybe, and with it a deepening hunger for more. We want to prove we’re smart about sports stuff or movie stuff or stuff about life in general, but mostly we want to be told that we are smart about it. This is natural enough.

The issue is the going-about-it. If the argument is pitched so that someone else must be wrong in order for the point-maker to seem more right, as it generally is with sports, things take a turn. More often than not, the losing party is an unfortunate so-and-so who constructs, coaches, or plays for your favorite team. On this premise, a very unpleasant church has been built. It’s indignant and hostile and embarrassing. It’s the lifeblood of ESPN’s shouty, empty Embrace Debate™ ethos and it wrongly empowers—well, not empowers, but maybe tacitly encourages—the type of person who thinks it’s a good idea to tweet “Nice job, dickhead!” at Brandon League after he blows a save. If this isn’t the same as being heard, it does at least make a sound.

And that’s something, or at least not nothing. Fandom is spectatorship, mostly, and we pay for that privilege. Watch while your team trades away its best young player for an overpaid vet, squirm as a sweaty coach is outflanked in the final seconds of a playoff game, wince as unaccountable city and state elders divert your tax dollars into the construction of some big, branded bowl o’ luxury boxes: what else is there to do, after all, but watch and squirm and wince at it? Outside of defecting to another team or, provided you’re fortunate enough in the first place, not renewing your season tickets, it’s hard to feel as if this is anything but a colossal misallocation of energy and interest, a great and repeated throwing of good psychic and emotional energy after bad.

There is one way around this, although it’s a deluded and silly one. That would be to deny all that obvious powerlessness and simply be as imperious and demanding as those making the mistakes and continuing to make them—to confuse emotional investment with ownership to the point of actually mimicking the most feckless, clownish form of ownership.

And so come the declarative statements, as if from a position of authority. The insistences and denunciations of various tacitly accepted “unacceptables,” the namings and barroom shamings. This seems like a miserable way to trudge through fandom, though—being angry or disappointed all the time that a team doesn’t match your vision of it, and knowing, at least underneath all the loud, misplaced frustration, that it never will. That, in fact, the whole idea is that it won’t, or can’t.

The good news is that being a sports fan doesn’t have to be such a despairing predicament. It just requires a regular emptying of the mental cache, a willingness to remember the actual object of devotion, and why, and a willingness to feel what feels good. Which, after all, is a large part of why we cultivate an interest in anything.

I spent five years as a music critic, and so know something about this. What tends to lead people in that scene astray is a confusion in the hierarchy between criticism (the talking about the thing) and music (the thing we all supposedly care about). Some of this is inevitable when pleasure becomes work, but it’s self-perpetuating, and it stinks, and it makes for worse and less happy critics.

Put five music crits in a room, there’s a decent chance they’ll spend most of the time talking about [Pitchfork writer]’s blandness, Spin’s latest flubbed reinvention, and the Twitter fight between [Stereogum dude] and [woman who used to edit at Vibe]. This is at least a little bit fun; it’s natural for a person in a particular field to want to gossip about other people interested in the same thing. But music writing, like sportswriting, is inherently ancillary, and people who only ever seem to want to talk about who gets it right, who gets it wrong, and who gets it stupid are not just drags but point-missing drags. They’re the Tom Townsends of the world, drowning in counterpunching Jeezy crit when they could be listening to The Recession.

Having a discerning eye and a personal aesthetic, or that and a Twitter feed, ensures that we’re all critics to a certain extent, albeit with audiences and megaphones of varying sizes. There is more opinion on the internet than we could possibly need, and most of it is surplus noise; we must know that the games and players we opine on are more interesting than most of the things written or said about them. The talk is supplemental, and anyway it’s out of earshot for most everyone, especially those making the decisions we belabor and bemoan and laud and thrash. We are not the athlete or the coach or the owner. We are the thing that watches and listens.

Watching and listening, not incidentally, is fantastic. We know this, too; it’s why we care in the first place. But we can lose sight of that. We can be jerks for the sake of being a jerk; I’ve done it. I’ve said some spiteful, priggish things about other writers, and after The Decision happened, I grabbed everyone around me by the figurative lapels and explained to them in raving, two-hour detail why my feelings should have been the principal concern in a rich stranger’s employment choice.

But I try more and more not to be that guy, and to realize that it doesn’t help anyone nor is it even particularly fun to get haughty or enraged about a game and the people who talk about it. When we bloviate or scold, it also undercuts what little authority we have. If we’re outraged—the screaming call-in radio show kind—about some workaday bad front office move, then what are we to do when confronted with a jowly fiend like Jeffrey Loria who really, really deserves our ire and thousands of hashtagged dickpunches?

Sports can be exhausting; caring about things is exhausting. But it shouldn’t be un-fun, and it really ought not eat away at you, make you mean or angry or dull. To this end, I say do whatever you need to do. Watch some dunk videos on YouTube. Pore over the SI Vault. Scrounge together some cash and have a hot dog and a beer at a ballpark somewhere. Ricky Rubio’s exhortation works here: “Change this face. Be happy. Enjoy!” There’s something like excitement or fascination or contentment or vicarious transcendence at the heart of why we like sports. It’s important not to lose that. Nothing else about this is as important, actually.