Vote on background checks too close to call 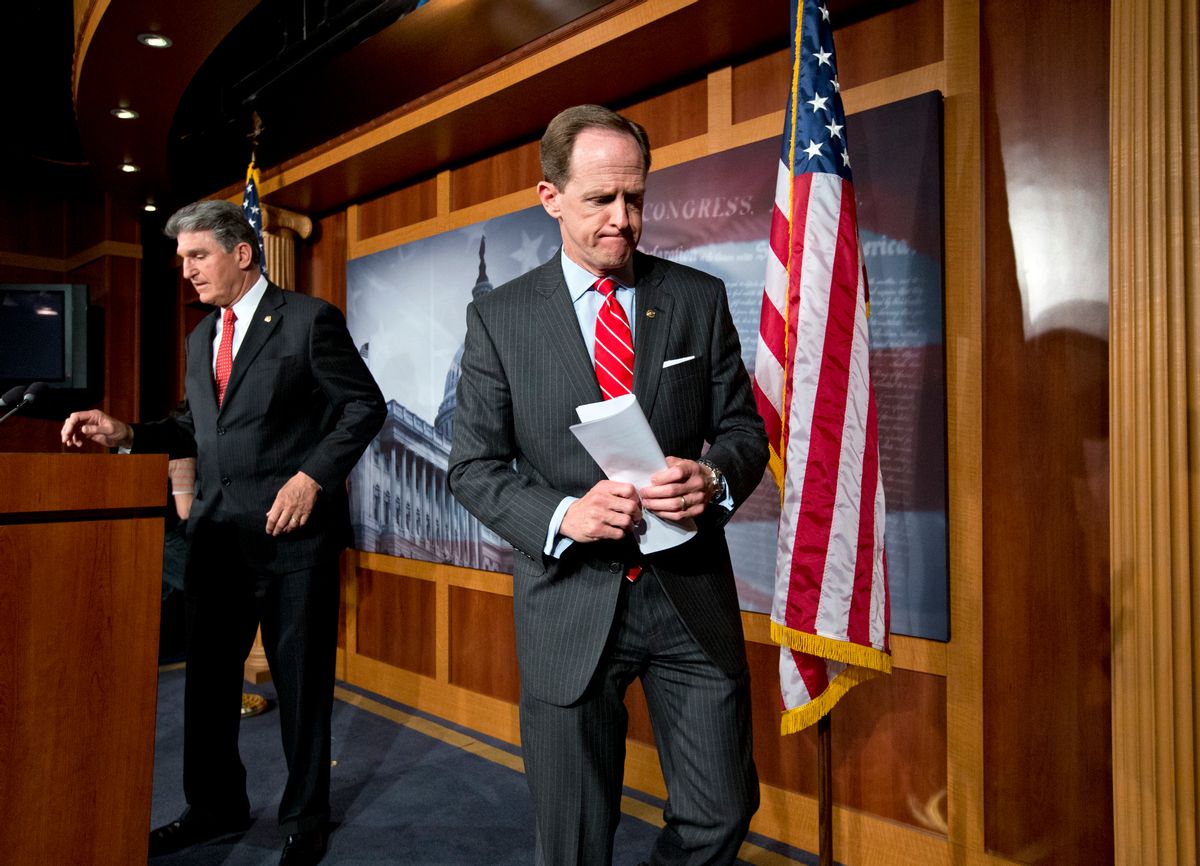 WASHINGTON (AP) — A bipartisan Senate proposal to expand background checks for gun buyers gained the backing of one Republican and the potential support of a second Sunday as sponsors said the vote expected this week was too close to call.

The plan would "strengthen the background check system without in any way infringing on Second Amendment rights," Maine Sen. Susan Collins said in a statement explaining her support for the measure. But she added that "it is impossible to predict at this point" what will be in a final bill.

Arizona Sen. John McCain, who has a B+ rating from the National Rifle Association, said he was "very favorably disposed" to the proposal that has emerged from Sens. Patrick Toomey, R-Pa., and Joe Manchin, D-W.Va.

"I appreciate their work," McCain said. "And the American people want to do what we can to prevent these tragedies. And there's a lot more that needs to be done, particularly in the area of mental health."

It was in McCain's home state that a gunman with schizophrenia shot then-Rep. Gabrielle Giffords in the head during a 2011 rampage in Tucson that left six people killed.

Collins and Sen. Mark Kirk of Illinois are the only two Republicans besides Toomey who are expected to vote for the compromise as of now.

It will take 60 votes to pass, meaning that more Republicans will have to come on board because some Democrats from gun-friendly states are expected to oppose the measure.

"It's an open question as to whether or not we have the votes. I think it's going to be close," Toomey said.

The measure requires background checks for people buying guns at gun shows and online. Background checks currently apply only to transactions handled by the country's 55,000 licensed gun dealers. Private transactions, such as a sale of a gun between family members, would still be exempt.

Manchin urged lawmakers to read the 49-page proposal. He said it should dispel any misconceptions about infringing on the constitutional right to bear arms.

"You can imagine for what, the last two or three months, that all you heard is they're going to take this away from you and that away," and all of the gun groups are trying to outdo each other, Manchin said Sunday on Fox News Channel. "And the bottom line is when you have a group now — Alan Gottlieb, the chairman of the Citizens Committee for the Right to Keep and Bear Arms, said, 'We read the bill, we like the bill' and it protects law-abiding gun owners like myself. And they are supporting it now. That is huge."

Gottlieb did not respond to a request Sunday to provide more details of the position taken by his group.

The Manchin-Toomey compromise was also endorsed late Sunday by the Independent Firearms Owners Association, a pro-gun group that is smaller and more moderate than the NRA.

The bill is the right way to "stand firm in defense of our constitutional rights and the security of our fellow citizens," said the group's president, Richard Feldman, a former NRA official.

The senators' agreement actually includes language expanding firearms rights by easing some restrictions on transporting guns across state lines, protecting sellers from lawsuits if buyers passed a check but later used a gun in a crime and letting gun dealers conduct business in states where they don't live.

"If you are a law-abiding gun owner, you're going to like this bill," Manchin said.

He acknowledged the vote would be tight. Asked how many votes he thought he had now, Manchin said: "Well, we're close. We need more."

The compromise, if successful, would be added to broader gun control legislation to strengthen laws against illegal gun trafficking and to increase slightly school security aid.

Other additions to the legislation also are expected to be debated this week, including a measure that would allow concealed hand gun permits issued by one state to be accepted nationwide as a de facto background check.

Sen. Marco Rubio, R-Fla., said in news show interviews that concealed weapons permits should be applied nationally. He also called for more prosecution of people that are trying to buy guns and fail a background check.

The Senate is also expected to consider, and reject, Democratic amendments to ban assault weapons and ammunition magazines carrying more than 10 rounds.

Manchin and Toomey were on CNN's "State of the Union" and CBS' "Face the Nation." McCain was on CNN.