Family of teen suicide victim claims she was sexually assaulted 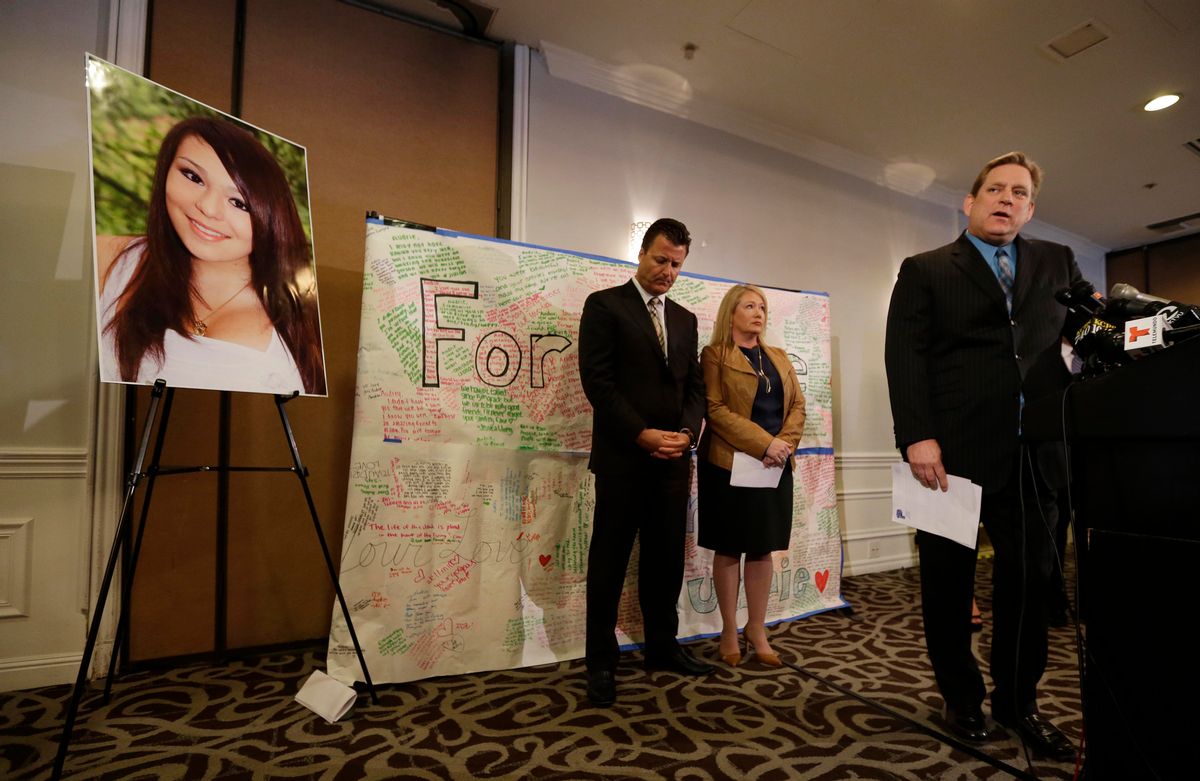 SAN JOSE, Calif. (AP) — Awakening in a friend's bedroom after drinking too much at a sleepover, 15-year-old Audrie Pott looked down and realized she had been sexually assaulted and her attackers had written and drawn on intimate parts of her body, her family's attorney said Monday.

Over the next week, she pieced together one horrifying detail after another. She went online and tried to confront the three boys she had known since junior high who she believed had done it.

At school, she saw a group of students huddled around a cellphone and realized that at least one humiliating photo of her was circulating.

"I have a reputation for a night I don't even remember and the whole school knows," she wrote in one Facebook message to a friend.

"I cried when I found out what they did," she wrote in another.

Eight days after the attack, she called and asked her mother to pick her up at school. She said she couldn't deal with it anymore but would not say what was wrong.

And then she hanged herself.

The Pott family disclosed the new details of the ordeal at an emotional news conference Monday in San Jose, discussing painful details of what their daughter was put through and demanding that three 16-year-old boys arrested eight months after the assault be tried as adults — a move that would be highly unlikely under California law.

The family also filed a lawsuit Monday against the three suspects and their parents, claiming the boys removed Audrie's shorts and "digitally penetrated her, and/or penetrated her with a foreign object, and/or sexually abused her" after she drank alcohol and passed out.

Audrie's mother, Sheila Pott, said she hopes to change that with a new "Audrie's Law."

"I want to take serious steps to see that this doesn't happen to another one of our children," she said.

Sgt. Mike Leininger, a retired San Jose police detective hired by the family's attorney to investigate the case, said interviews of people at the party showed the suspects were sober at the time of the attack in Saratoga, a bedroom community on the fringe of Silicon Valley.

However, a police report obtained by the San Jose Mercury News said the suspects told authorities during the initial investigation that they did drink at the party.

The police report also says witnesses told investigators the three suspects took the drunken Audrie to sleep in an upstairs room then assaulted her.

The report says the attackers pulled off her shorts and partially removed her bra, exposing her breasts, the newspaper reported. Markings were found on her chest, legs, back and near her genitalia.

"They wrote 'Blank Was Here,' on her leg," said family attorney Robert Allard, not using the actual name because the suspect is a juvenile. "They marked her."

Lisa Pott, the stepmother of Audrie, said the three suspects were removed from the football team after her suicide but weren't expelled from school, despite their pleas to the principal.

She said Audrie had been dealing with bullying problems at school prior to the assault, and the family had asked the principal for help last spring.

Jane Marashian, a spokeswoman for the school district, said officials had no comment in response to that claim.

Attorney Eric Geffon, who represents one of the three suspects, told The Associated Press that attorneys representing all three will have a statement Tuesday after a hearing in Juvenile Court.

Geffon said the boys were cited last fall but no formal charges were filed against them until Santa Clara County sheriff's deputies arrested two boys at Saratoga High School and a third, a former Saratoga High student, at Christopher High in Gilroy where he currently was a student. They have been held in the county juvenile detention center since Thursday.

Audrie Pott's father, mother and stepmother said they were outraged by what they see as a refusal to take responsibility by the teens. Lawrence Pott, the girl's father, said he was astounded that defense lawyers for the three denied a link between the assault and the humiliating photo and his daughter's decision to end her life.

"With no assault, with no cyberbullying, Audrie is in art class right now," he said, his voice breaking as he held back tears. "What they did was disgusting."

Audrie spent two days on life support after she hanged herself, according to the family's lawsuit.

The AP does not routinely identify victims of sexual assault. But in this case, Pott's family wanted her name and case known, Allard said. The family also provided a photo to the AP.

The arrests and the details that came spilling out shocked many in this prosperous Silicon Valley suburb of 30,000 and have drawn international attention, especially coming just after two other similar episodes recently in the news — a suicide in Canada and a rape in Steubenville, Ohio.

"I have to say we were unprepared for the amount of media attention that we are getting," said Lisa Pott, mother of Audrie's three younger siblings. "Not only is this scary and intimidating, but just as we thought we might be starting to heal, it rips open the wound and reminds us of everything our family lost."