Heroism at the Boston Marathon: Meet "the helpers"

In the face of darkness on Monday, first responders, runners and perfect strangers fought back with kindness 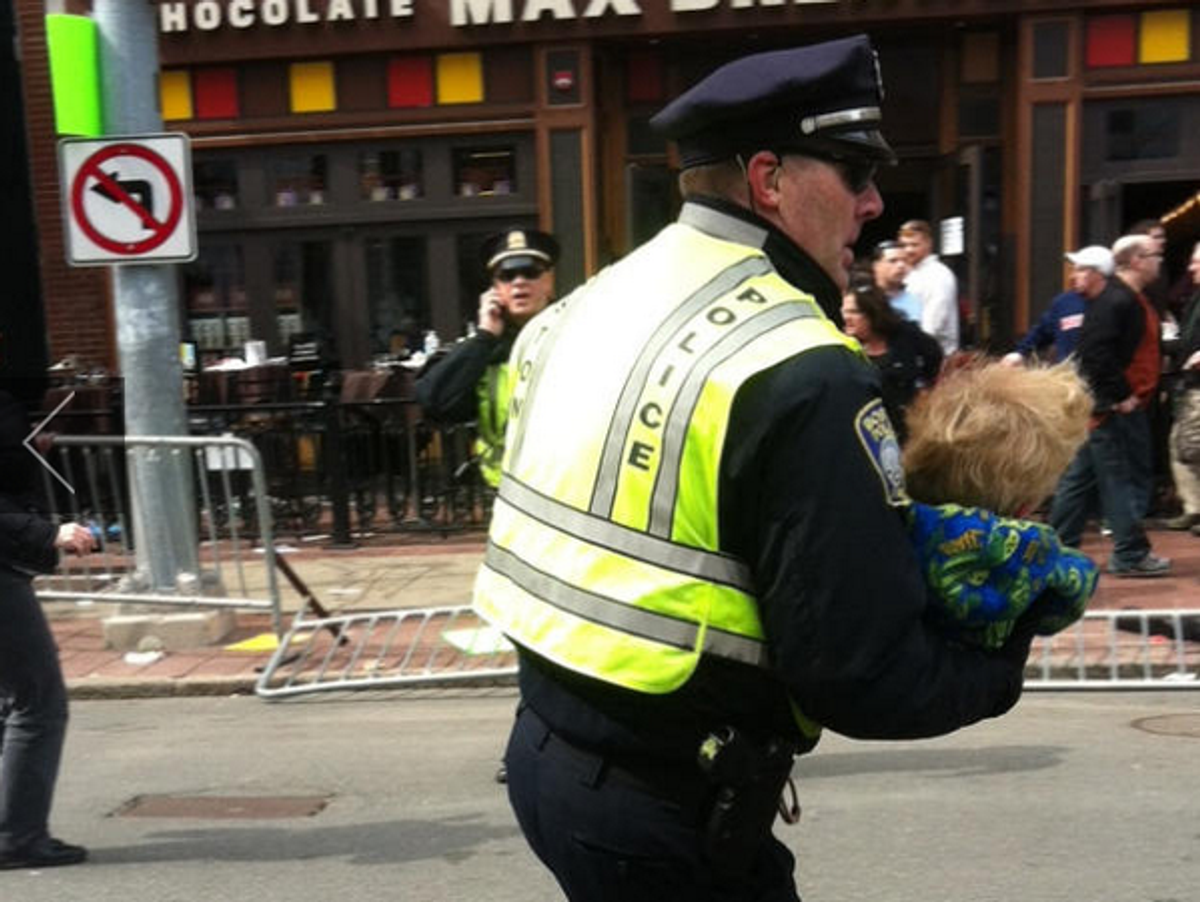 As Boston faced down the terrible violence, fear and uncertainty caused by the Boston Marathon explosions on Monday, thousands of people in the city (and elsewhere) stepped forward to help. First responders, other runners and perfect strangers offered medical attention, comfort, food, shelter and whatever else they could give.

These extraordinary people are, as Mr. Fred Rogers called them, "the helpers": "When I was a boy and I would see scary things in the news, my mother would say to me, 'Look for the helpers. You will always find people who are helping,'" he explained.

As the nation grieves with Boston, a few stories from "the helpers" to remind us that, even in darkness, there is light.

So many of the runners continued to run across the finishing line and onwards to the Massachusetts General Hospital, in a rush to give blood, that they had to be turned away.

"Due to the generosity of our donors we don't need blood at this time," wrote the Red Cross for Eastern Massachusetts on Twitter.

But the volunteers kept on coming, leading the organisation to tweet an hour later: "We do *NOT* need blood at this time. Please schedule a future donation."

So great was the wish to help that the Red Cross was forced to set up a diary to arrange appointments for all those queuing up to give blood.

Others provided more immediate assistance. One man was caught on camera rushing straight to site where the bomb had detonated, where bloodied people were lying dazed on the pavement. He ripped off his belt to make a tourniquet and stem the bleeding, before turning to assist other seriously-injured victims.

From the Boston Globe:

At 6:30 p.m., Marathon volunteer John Gannon drove slowly down Charles Street in his Honda Accord, calling out the window to ask if stranded runners needed a ride or a phone to borrow.

He scoured the streets, trying to help out-of-town runners separated from their family and friends, their phones and their wallets.

He had taken two carloads to Harvard Square and a third to the Newton Marriott.

“I just couldn’t go home. I felt like I had to do something,” said Gannon, a lawyer, his voice faint. “We just felt like our mission wasn’t done.”

Ramsey Mohsen—who has been chronicling his experience at the marathon, including his time in the sidelines before the bombing— posted a photo of a local Bostonian giving people a bathroom to use and orange juice.