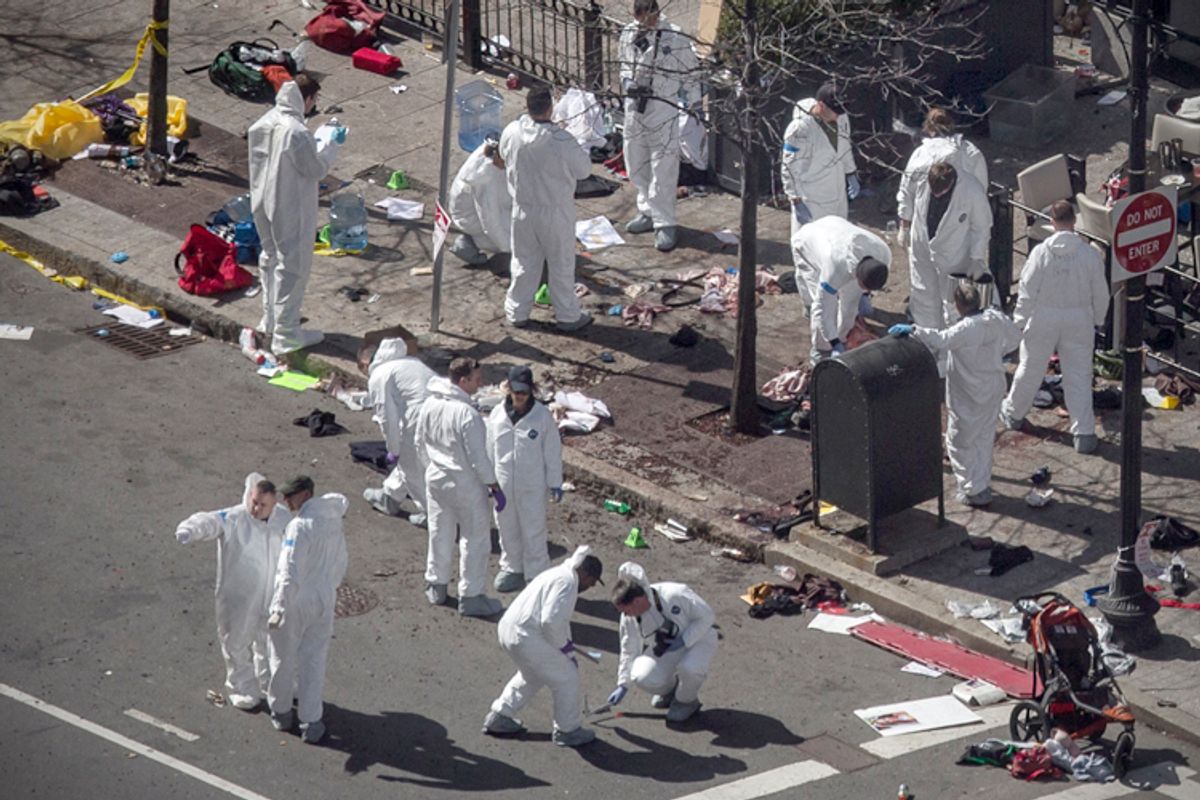 Investigators survey the site of a bomb blast on Boylston Street a day after two explosions hit the Boston Marathon in Boston, Massachusetts April 16, 2013. (Reuters/Adrees Latif)
--

Richard Clarke, a counterterrorism czar under both President Clinton and George W. Bush, posted this essay on his public Facebook page today

How they will investigate the Boston Bombing

While detectives and federal agents have started the laborious process of interviewing thousands of people in Boston, much of the work that is likely to be key to solving the Boston Bombing is technical and forensic.

First, the FBI will stitch together hundreds of hours of video camera recordings from private and public surveillance and traffic cameras, as well as recordings made by private citizens attending the race. They will look for when the bombs might have been left behind and then examine the faces of everyone who was in the area around that time. They will try to put names to those faces, using facial recognition matching software, drawing on drivers license, passport, and visa databases. In the case of the Mossad operation in Dubai, the police in the United Arab Emirates were able to recreate most of the assassination operation by using snippets from dozens of surveillance cameras. For the FBI in Boston, a similar process has now begun.

Second, FBI and NSA will look at phone records. If the bombs were command detonated using mobile phones to trigger the blast, it may be possible to find out what phone numbers were used by seeing what numbers were called on that block or in that neighborhood at exactly the time of the blasts. The FBI will look at calls that went through specific cell towers in the Copley Square-Prudential Center neighborhood of Back Bay. There will be many innocent calls made at that time, but if some of the calls went to unregistered mobile numbers (an unregistered phone is a mobile device bought at a convenience store without providing a telephone company a user name, relying instead on pre-paid calling cards), those “burner phones” may have been the detonators.

The FBI will want to find out who bought the “burner phones” used to make the calls and to receive them. It may be possible to determine where the phones were sold and when. If they were sold at a convenience store like a CVS or 7-Eleven, there may be store surveillance camera video of customers present when the phones were sold. An image of the buyer could then be made public in the hope that someone will come forward to identify the face.

NSA will also look for calls from the Boston area around the time of the blast to suspicious numbers in Pakistan, Afghanistan, Yemen and other Middle East locations. If it were an Islamist attack (which is by no means certain), the bomber may have checked in with fellow terrorists before or after the strike. FBI will check chat rooms and blog posts on right-wing American extremists groups to see if there is any sign that people in that subculture knew about the attack before it happened or have guesses about who may have done it.

Third, FBI (perhaps with help from ATF) will try to reassemble the bombs by gathering as many tiny fragments of material as possible, as they did in the case of the bombing of Pan Am 103 and Oklahoma City. Already they have informed guesses about the explosive material and the fragmentation material. They will collect fragments from the buildings, the temporary crowd control fence that lined Boylston Street and, regrettably, from the severed limbs of the victims. Next, the FBI will try to determine if a bomb design was used based upon a specific “how to make a bomb” web page on the Internet. Law enforcement authorities will try to determine where the bomb materials and the backpack or other carrying case were purchased.

Fourth, Homeland Security investigators will examine who flew out of Boston, especially to foreign locations, around the time of the bombing. In the 1993 World Trade Center attack and the CIA Headquarters-Route 123 shootings, attackers moved quickly to the airport to get out of the country.

Fifth, police and federal agents will contact all of their informants in Islamist cells and American Right Wing and Aryan Supremacist groups. They will offer rewards for leads, for suspicions. Unless the attack was done by a self-initiated loner (which is highly possible), the bomber or bombers will tell someone eventually of their involvement. Alternatively, as in the case of the Unibomber, a family member may call the police when they realize that their brother, husband, or son may have been involved.

In major investigations such as these, the case is usually solved either very quickly due to a lucky break or it takes months of painful detailed work. Sometimes, as in the Atlanta Olympic bombing and the TWA 800 crash, the investigation may go down a mistaken path for a time. However long it takes, these cases do get solved. For me, a Bostonian who grew up watching the end of so many Marathons, spent so many days hanging out in Copley Square, this attack feels personal. The eight year old boy who died was from the Dorchester neighborhood, “Dot,” where I lived when I was an eight-year-old boy. For that boy and the other victims, this case will be solved and the criminal terrorist will be apprehended.