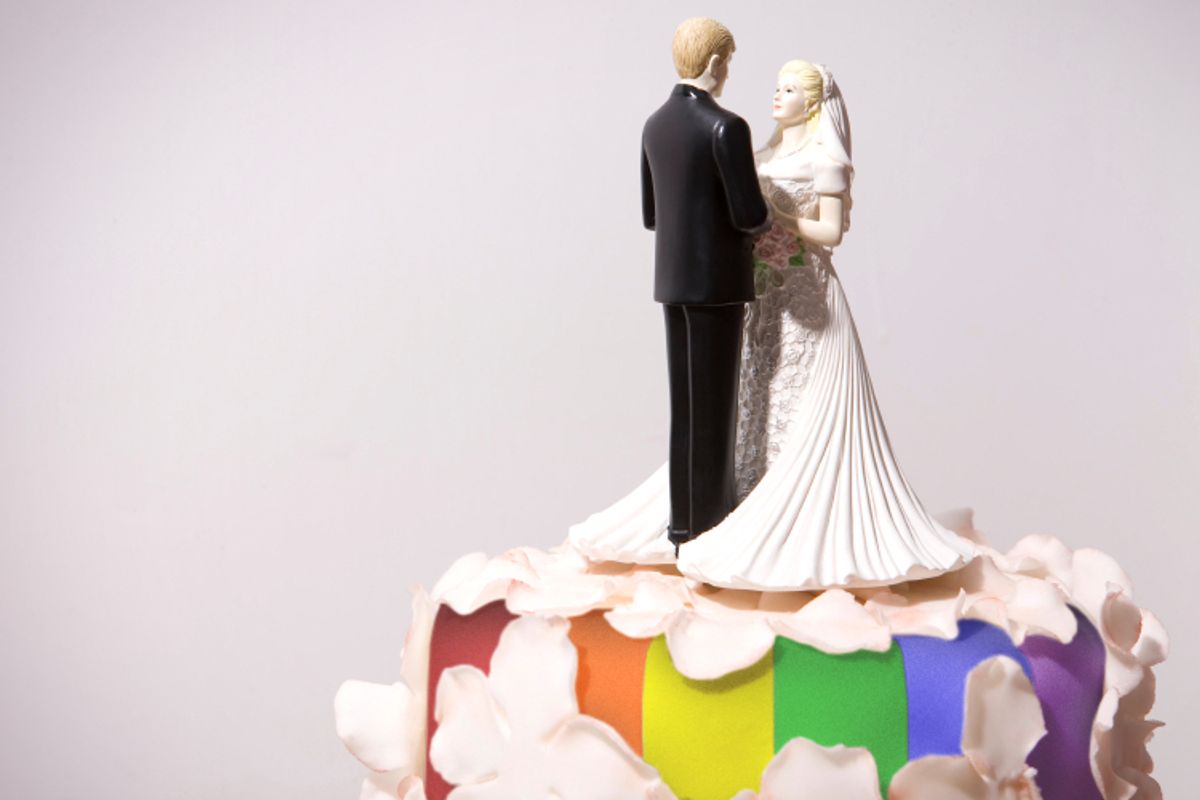 Salon has changed the name of the author and other people in this story in order to protect their identity.

We met up on a recent rainy weeknight at an unremarkable legal office in the outer boroughs. Inside, a warm but appropriately solemn woman sat me down, explained the basics, and told me to sign here, here and here. On the way out the attorney warned Flavia and me that it’d take at least a few months yet for the paperwork to weave itself through the courts. We exchanged resigned glances, sighed semi-dramatically, thanked her for her time, then ducked into a boisterous Greek restaurant a few blocks away for dinner.

When the waiter brought us our bottle of wine we filled our glasses to the brim, mused about the end of an era, and raised a toast: “To divorce!”

After a Mediterranean feast we headed over to her apartment nearby so I could finish up some work emails, and over some more wine flipped through our old wedding album, giggling at some of the cheesy photos from the reception. Conspicuously absent from our little album, which a federal bureaucrat had paged through some years back while scrutinizing us closely, were pictures from our honeymoon, a wild Saturday night spent at the Cubbyhole, a popular lesbian bar in the West Village where, incidentally, we also first decided to get married.

And thus began my new life as a divorcé. For more than five years I was legally married to a lovely Brazilian woman we’ll call Flavia for the purposes of this essay. Flavia, like me, is as gay as they come, and this lent itself to easy jokes about us being unheralded pioneers of the gay marriage movement, in that we got gay-married years before New York state voted in a marriage equality law. But our situation is actually pretty par for the course in big city USA, from what I can tell: I could rattle off at least a half-dozen other gay, but straight-married, friends, colleagues or acquaintances in New York who’ve embraced the institution of marriage for practical reasons. It’s more common than you might think: gay-jacking marriage to take advantage of the legal benefits that the institution bestows on straight married couples, chief among them access to a green card, and a pathway to citizenship.

While working part-time at a small downtown restaurant some years ago I became fast friends with Flavia and the tight-knit crew that kept the place running. Restaurant work creates a certain esprit de corps, and during busy nights of bartending and running food I quickly got to know this funny, down-to-earth, smart person who was working her butt off in New York. And besides liking her I respected her: Over time I’d learned that on a waitress’ salary she’d been sending money to her mom back in Brazil every month for years to pay off a home construction loan, and to pay for her younger brother’s school fees. Pretty badass.

In the meantime she hadn’t seen her mother or her brother in eight years. Like 40 percent of immigrants in the U.S. living and working without papers, she’d overstayed her visa, and technically at least, could be deported at any time, and permanently barred from reentry if she left the country. I was no expert on immigration law then, but it seemed like a raw deal.

If Flavia were straight, and had met an American guy who wanted to make an honest woman of her, there’s a fairly straightforward process for citizens to sponsor their foreign-born spouses for residency. But if you’re gay or lesbian in a binational relationship, getting married in New York (or for that matter any state that’s passed a marriage equality law in the last few years) won’t help you. That’s because the Defense of Marriage Act, at least until the Supreme Court has something to say about it this summer, mandates that the federal government only recognize heterosexual marriages.

The legal consequences of this are varied and generally terrible for the estimated tens of thousands of binational gay and lesbian couples in the U.S., many of whom are married. Despite the Obama administration listing enforcement of deportation orders for these couples as “low priority,” couples still live with the constant fear of deportation, and some, including former Salon columnist Glenn Greenwald, choose to go into exile to protect their relationships.

So in order for Flavia to hold on to the life she’d built for herself in New York, and avoid exile if possible, she needed a good old-fashioned husband. That’s where I came in.

If you ask me why I did it, I could tell you it’s because Flavia was such a deserving person, and it sucks that the discrimination written into our immigration laws makes it twice as hard for her and others like her to get a foothold here. Or that as a dedicated internationalist who believes that in a world where capital flows unhindered across borders, all people should share in that same freedom: Green card marriage as act of resistance!

But looking back on it now I think I did just as much because it seemed like a different, zany thing to do. I was a single gay man coming out of a long-term relationship, working a few different jobs, and the prep involved didn’t sound that cumbersome, after all (more on that later). I enjoy languages and she had started helping me learn Portuguese, so why not? I was vaguely aware that the whole endeavor was illegal (punishable with up to five years in prison and a $250,000 fine, in fact), and the kinds of concerns my parents might raise occasionally came to mind (“What about your credit score??”), but this all seemed rather abstract. And Flavia and I saw each other at least once a week at work anyway, so really, what more does marriage require anyway?

As it turns out, not all that much -- at least at first. On the day we got hitched we dressed to impress, headed to City Hall with a witness in tow, held hands, stood in line, exchanged rings and a big fat smooch, filled out some paperwork, and most important, took lots and lots of photos. For any married couple in the U.S. hoping to sponsor a non-American spouse for a green card -- gay, straight, legit, pay-to-play, or anything in between -- documenting the relationship in photos and in other more banal memorabilia of cohabitation and coexistence (namely, bills) is critical. In the interview room where an agent of the State looks you over, asks some cursory questions, and rifles through your file, a photographic record is key.

Thus our mildly gauche wedding reception a few days afterward, at the apartment of a gay Brazilian friend who’d gotten green-card married the same day as us (if you’re sensing a pattern, good). This other groom had a flair for design, and he’d decked out his place with white roses everywhere, doilies, champagne and of course a traditional WASPy white wedding cake with a kitschy statuette on top of a Bridezilla dragging her groom by the collar. We invited some close friends to the party, reprised our wedding best again, guzzled champagne and took pictures like crazy, alternating the cake cutting money shot between the two couples.

So many photos, so many memories, so many back stories. That adorable photo of Flavia and me sitting with our arms around each other, my parents smiling in the background (snapped surreptitiously when they were visiting New York one weekend, while we dined at the restaurant where Flavia and I still both worked. Our friend who took the photo for us got green-card married a year or two later). Picturesque photos of us upstate on our “honeymoon” (a day trip to the Dia Beacon gallery). At a Super Bowl party together, here blowing out birthday candles, now with friends at a party.

And now inside a small office filled with potted plants, seated side by side in front of a stern woman in her 50s who’s flipping through our album, asking us how we’d met, what we do for a living, who does the cooking and who does the cleaning (but not, as many imagine, grilling us with invasive questions about our sex life). The unnerving thing about that morning was that the interview date had been confirmed for the same day I was scheduled to fly out of the country. Poor Flavia almost had a heart attack when I proposed that we ask them to reschedule (apparently they don’t do that). But with the interview early in the morning and my flight in the afternoon we gambled that we’d be able to finesses it, and we did.

Our interviewer lingered over the photo of Flavia with my parents and me, and finally, toward the end of our interview, hinted at a smile. A few hours later Flavia had a provisional green card, and I was headed to the airport to visit a friend overseas who, as it happens, had left the States a year or two previous because of headaches over his  own immigration status.

Fast-forward a few years later. Flavia’s an American citizen now, and has been able to visit her mother, her brother and other family in Brazil a number of times. And I’m closing in on two years with a guy I met at a party the night New York state passed the gay marriage bill. On one of our earlier dates I  explained to him that I had to run off after drinks to have dinner with my wife, which he found hilarious, and, for some reason, endearing. A few months later we moved in together.

Now that I’m a divorcé I’ve also been thinking a bit more about the fact that for many years the federal government paid me and my gay wife thousands of dollars for being married, by enabling us to file our tax returns jointly, often bumping up our returns from triple to quadruple digits. If you do your taxes online, TurboTax makes it easy to see how hard-wired in our tax code the marriage advantage is. For years we filed jointly and were rewarded for it, but if my boyfriend and I were to head down to City Hall tomorrow, unless and until the Supreme Court does away with DOMA, we’d both still be obliged to file as individuals. It still pays to be straight, literally.

It’s funny, because I came rather late and noncommittally to the marriage equality movement. I was one of those who either didn’t think about it all that much, or who’d say, “Why parrot a restrictive hetero institution, who needs it?” In the end, though, it was the dollars and cents, the experience of accessing an institution and enjoying the tax and immigration privileges that came with it, that really flipped a switch and helped me see and feel firsthand how these laws penalize gays and lesbians.

That’s why it wasn’t until I was married that I made it out to my first marriage equality march, or why more recently my boyfriend and I have been talking about the long haul together, about what that means, and even using the M word to describe that. Recently I asked Flavia for her blessing, and over drinks at the CubbyHole we raised another toast, and she gave us a thumbs up. Nobody’s talking about dates yet, though. After all, my divorce isn’t yet final.

Mike Branson-Wallace is the pen name of a writer living in New York.