Today was a "shameful day for Washington," a feisty president says after a gun bill died in the Senate 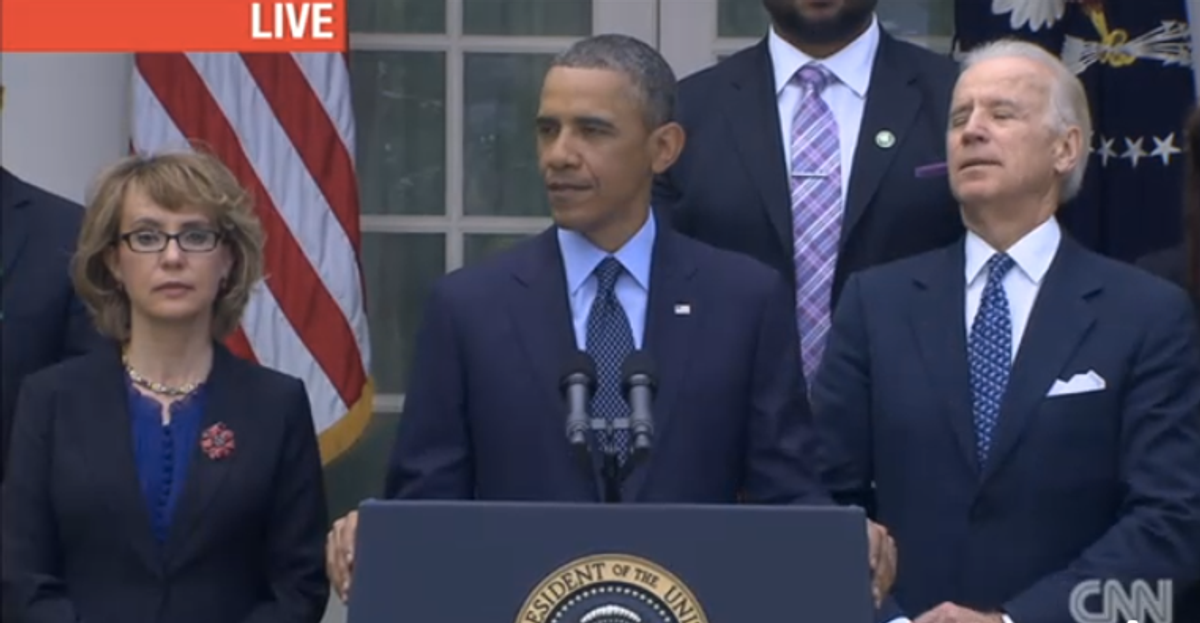 Speaking just minutes after a minority in the Senate killed a bipartisan bill to expand background checks on gun sales -- something 90 percent of Americans support -- President Obama stood in the Rose Garden in front of weeping gun violence victims, including former Rep. Gabby Giffords, to give a searing indictment of the forces that just blocked even this modest reform.

Showing flashes of anger and passion rare for this president, Obama laid into the National Rifle Association and Senate Republicans, saying they "willfully lied on this bill," especially by erroneously claiming the bipartisan background check legislation known as Manchin-Toomey would create a national gun registry when, in fact, the bill made creating one a felony punishable by 15 years in prison. Even though politicians lie all the time, the word "lie" is almost never uttered in public discourse in Washington, let alone by the president, underscoring his unusual anger.

"Unfortunately, this pattern of spreading untruths about this legislation served a purpose. Those lies upset an intense minority of gun owners and that in turn intimidated a lot of senators," Obama said. "There were no coherent arguments as to why we shouldn't do this, it came down to politics."

He even took a highly unusual shot at four senators in his own party who voted against the amendment to expand background checks out of fears that the gun lobby would come after them, saying, "Republicans had that fear, but Democrats had that fear too. So they caved to the pressure. And they started looking for an excuse -- any excuse -- to vote no."

"Too many senators," Obama said, "failed" their test of leadership. Behind him parents of children killed at Sandy Hook and in other massacres visibly wept.

But he reserved special criticism for Sen. Rand Paul, who said Obama was using gun violence victims as "props." "Are they serious?" Obama said of Paul's comments without mentioning him by name. "Do they really think that thousands of families whose lives have been shattered by gun violence don't have a right to weigh in on this issue?"

"So all in all, this was a pretty shameful day for Washington," Obama concluded, before promising to try again and asking citizens to put pressure on their members of Congress.

Indeed, after Columbine in 1999, when Republicans in the Senate killed a robust bill to expand background checks, the public outcry was so strong that they immediately backtracked and approved a stronger bill (it later died in the House).