Thatcher’s funeral as divisive as her reign

Between her royal-like funeral and a stifling of posthumous criticism, core British tenets are under siege 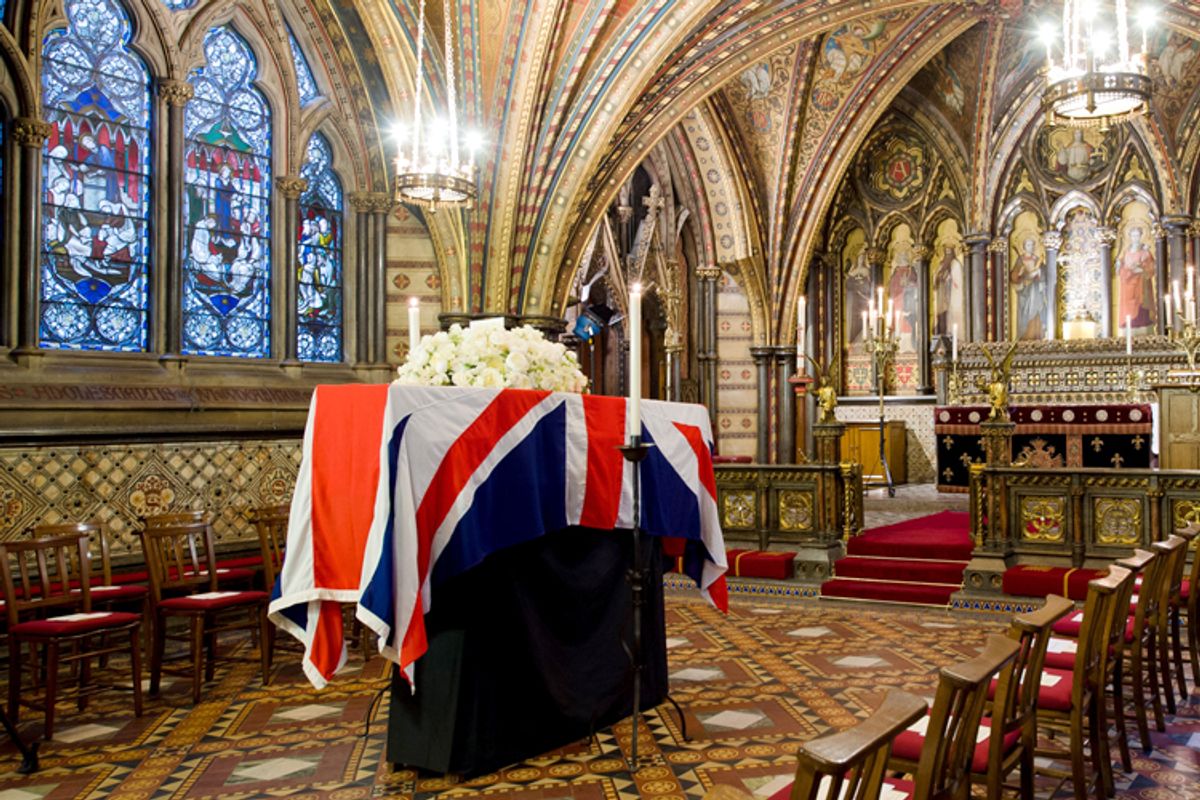 The coffin of British former Prime Minister Margaret Thatcher rests in the Crypt Chapel of St Mary Undercroft beneath the Houses of Parliament in central London on Tuesday April 16, 2013. (AP/Leon Neal)
--

The funeral of Margaret Thatcher is proving to be as divisive as the policies she pursued while she was prime minister. Early on Wednesday morning, mourners and protesters as well as curious onlookers will gather for her funeral procession, which will snake through central London from the Palace of Westminster to St Paul’s Cathedral. Her coffin, draped in the union flag, will be carried on a First World War-era gun carriage drawn by six black horses, with its route lined by more than 700 military personnel. Once the procession reaches St. Paul’s, Thatcher’s funeral service will take place in the presence of dignitaries from around the world and be broadcast to millions at home and abroad. Yesterday it was announced that the chimes of Big Ben would be silenced for the duration of the funeral proceedings, a step last taken in 1965 at the state funeral of Winston Churchill.

But criticism is growing of the lavish scale and cost of Thatcher’s send-off – the latter currently estimated at 10 million pounds (an estimated $15.3 million), plus a 5 million pound security operation, to be funded using public money. Politicians are increasingly breaking ranks to question the wisdom and appropriateness of laying Thatcher to rest in a manner more usually reserved for royalty, as well as the spending of quite so much money at a time of contentious enforced austerity.

The former Labour politician Lord Prescott has described the funeral as a "political propaganda exercise" for the governing Tory party, while more than one of his colleagues have called for it to be paid for by the private donations of the rich rather than by the British taxpayer. Even Buckingham Palace has apparently voiced concern over granting a ceremonial funeral with full military honors to a woman who remains such a controversial figure.

This public criticism follows a groundswell of popular discontent both at the prospect of a ceremonial funeral and over the disputed legacy of Thatcher herself. For the past week, British social media has been ablaze with indignation at the prospect of 10 million pounds being “wasted” on the funeral, when Britain is simultaneously being asked to swallow cuts to welfare and public services at a time when the cost of living is outstripping wages for increasing numbers of people. An online petition to protest at the expense of the funeral has attracted almost 30,000 signatures.

This opposition can be glimpsed beyond the responses of government and the mainstream media, which have largely confined themselves to eulogies from politicians and public figures, allowing little deviation from a party line determined to downplay or demonize any overt criticism of Thatcher. Britain’s first female prime minister presided over perhaps the most politically divisive decade in recent British history, the economic and social effects of which are still being felt, but little of this division has been explored or even admitted to in mainstream media in the wake of her death. Financiers and businessmen who did well from Britain’s time under Thatcher have been granted airtime and column inches to be outspoken in their praise of her, while spokespeople for areas of the country devastated by the destruction of Britain’s manufacturing industry in the 1980s, and which remain blighted by long-term unemployment, poverty and lack of prospects, have been notable by their absence. In such a climate, the ensuing insistence upon an extravagant ceremonial funeral for Thatcher has been regarded by many hard-pressed citizens as an affront too far.

When news of Thatcher’s death broke in Britain at lunchtime on Monday, April 8, irreverent or actively jubilant responses were not difficult to come by, despite official efforts to give the impression of a nation united in grief. Throughout the day, spontaneous public gatherings were organized across the country, characterized more by catharsis than celebration. They were greeted nonetheless by criticism both from Thatcher’s expected defenders on the right wing of British politics – Prime Minister David Cameron branded them "disgraceful" – and from those on the left, who offered understanding but nonetheless urged any potential celebrants to behave with dignity.

These proscriptive responses from left and right appeared to willfully ignore not only the strength of feeling still inflamed by the negative effects of Thatcher’s policies, but also Britain’s time-honored tradition of popular protest, which does not shrink from being disrespectable and disruptive – even at state occasions, where the pomp of official ceremony has always been vulnerable to deflation by a populist pinprick.

At Wednesday’s funeral, however, protesters have called for opposition to be expressed in a peaceful and dignified way. Several groups intend to assemble at designated points along the route of the procession in order to symbolically express their rejection of Thatcher’s politics by turning their backs on the coffin as it passes. Rebecca Blum, one of many campaigners advocating the gesture, told the Guardian newspaper: "I don't want to upset anyone but I feel very strongly that public money is being used to venerate a deeply controversial politician who caused huge suffering and devastated this country ... I felt like it was important to let the world know that a lot of people in this country strongly disagreed with what Margaret Thatcher stood for."

One of the least expected expressions of anti-Thatcher sentiment has been the campaign to push the "Wizard of Oz" song “Ding Dong! The Witch Is Dead” to the No. 1 position in the UK charts, which led to BBC Radio taking the unprecedented step of inserting a news item into its chart broadcast in order to explain the track’s sudden appearance, rather than allowing the track to be played in full. Absurd as it may have been as a method of protest, the campaign nevertheless forms part of a united front of opposition, as may any comparable actions taken during the funeral procession.

They stand alongside Britain’s spontaneous street parties on the day of Thatcher’s death, and last Saturday’s gathering of several thousand protesters in a dispiritingly rain-drenched Trafalgar Square, with attendees including anarchists, socialists and anti-capitalists of all stripes as well as unaligned Thatcher refuseniks. Also present in Trafalgar Square was a delegation of former mineworkers from northeast England, whose spokesman described Thatcher’s government as having been "a disaster" for their communities. Together, these disparate expressions of dissent reveal both the degree to which Britain remains a divided kingdom, and the extent to which the depth of these divisions is a direct result of actions taken by Thatcher herself.